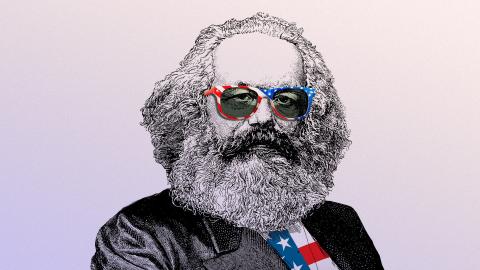 A survey shows that U.S. adults, especially millennials, increasingly endorse Marxist views such as the rejection of private property and traditional morality, even though they don’t adopt Marxism as a label. The Cultural Research Center at Arizona Christian University, which published the results last week, found in a representative poll of 2,000 U.S. adults that one-third or more endorsed a dozen elements of Marxist theory, including those on racism and God.

Pollster George Barna, the center’s founder and research director, said the results indicate that 10% of Americans have internalized Marxist ideology and now draw from it in their daily decisions, even though only 1% of Americans adopt Marxism as their primary worldview.

“It tells me that Americans are open to almost every ideology that’s out there in the marketplace. They’re not tightly wedded to any one worldview, but are drawn to a number of views that advance their personal interests or seem attractive in the moment,” Mr. Barna told The Washington Times.

Mr. Barna, who founded the Christian evangelical polling firm The Barna Group in 1984, said U.S. adults pick up Marxist views without realizing it. “They may not like being thought of Marxist, but they don’t know what Marxist principles are, by and large, and so they are unwittingly embracing those principles,” he said.

The results of the poll reflect those of other surveys. An October 2020 YouGov poll found that 26% of Americans supported “the gradual elimination of the capitalist system in favor of a more socialist system.” On economics, 27% of respondents to the Cultural Research Center’s survey agreed that allowing people to own property facilitates economic injustice, and 23% agreed with the statement that individual property ownership is bad for society.

Regarding critical race theory, which posits that racism is a foundational element of American society, 41% agreed with the statement: “Race is used by white people to advance their economic and political interests at the expense of people of color.”

Mike Gonzalez, a senior fellow at The Heritage Foundation, said the Marxist founders of the Black Lives Matter movement have appropriated this tenet of critical race theory in a bid to overturn society. “[Alicia] Garza, Patrisse Cullors and Opal Tometi, Black Lives Matter’s three main founders, have always been candid about their Marxism, which is a synonym for communism,” Mr. Gonzalez wrote in a Sept. 8 commentary on the Heritage website.

“This is a significant political shift, never before seen in the American setting. We’ve seen little eruptions of socialism in the 20th century, but I think this is a tipping point,” said Ms. Munsil, an Arizona Christian University political science professor.

She said it’s unclear whether the Marxist views will persist, especially among younger adults, as the ideas move from theory to reality in legislation.

“The current congressional spending bill represents unprecedented wealth transfer,” Ms. Munsil said. “Over time, the detrimental effects will appear in the loss of personal liberty and economic prosperity, which we’ve taken for granted in this country. Because we’re so optimistic about the free market, I don’t think we have any concept yet that Marxism could happen here.”

“This would not have been a conversation 30 years ago. It’s a conversation now because we’ve done such a poor job of teaching about different forms of government and the consequences of what they produce,” Mr. Barton said. “We don’t know much about any government, including our own constitutional republic.”

Mr. Barna said his survey’s questions presumed the traditional definition of Marxism as a political and economic theory of class struggle that seeks a more equitable and fulfilling existence.

“Marxism sees the world as two classes: the capitalists, who control economic and political resources, and workers, who are exploited through their underpaid and underappreciated labor,” he said. “A Marxist society would eliminate economic classes and the private ownership of the economic assets that control the masses. Theoretically, every person within the society works for a common good, which in turn enhances their own quality of life and hope for the future.”

Mr. Barna noted that poll results showed non-Whites and those ages 18 to 37 were likelier than older adults to endorse Marxist beliefs, suggesting that changing demographics and worldviews will fuel support for socialist policies. “It varies by question, but on average millennials are 5 to 10 percentage points more accepting of Marxist views than older Americans. Non-Whites didn’t have as broad an acceptance but were focused more on perceived economic injustice and on some moral behaviors,” the pollster said.

The survey shows that declining beliefs in Christian viewpoints and morality correlate strongly with acceptance of Marxist beliefs, especially among young people. Millennials were most likely to agree that God either does not exist or cannot be known, that there are no moral absolutes beyond what individuals determine for themselves, that having an abortion or sex outside of marriage is ethically permissible, and that suicide and euthanasia are “morally acceptable choices,” regardless of motivation.

Millennials also were likeliest to identify as LGBTQ.

Jeff Myers, the president of Summit Ministries, said the poll confirms “that Marxists want to erode support for any institution they see as supporting the ownership of private property: traditional marriage, economic freedom, republican government and religion.” “Millennials seem to go along with it. This doesn’t make them Marxist revolutionaries, but it does position them to be manipulated by people who are,” Mr. Myers said.

Analysts said the poll’s results track with national surveys over the past decade that increasingly show U.S. adults expressing a preference for socialism over capitalism as religious affiliation gradually declines.

“When you look at a study like this, I don’t think it’s a coincidence that as fewer people believe in God and look to the Bible for moral instruction, more of them trust the government to decide what’s morally praiseworthy,” said David Closson, director of the Family Research Council’s Center for a Biblical Worldview.

In a 2018 Gallup poll that asked Americans to define socialism, 17% said “government ownership of the means of production.” That was half of the 34% who gave this answer in 1949. In the recent poll, 23% could not answer the question.

John Berlau, a senior fellow at the libertarian Competitive Enterprise Institute, said this lack of knowledge could have dangerous consequences. “We need to teach kids and young adults about the importance of private property so that no one will be at the mercy of an arbitrary government,” Mr. Berlau said. “If we don’t do that, the government could confiscate it forcibly or regulate it to death, to the point that someone owns it in name only.”

Conducted by telephone and online in February, the Cultural Research Center’s second annual American Worldview Inventory had an estimated maximum sampling error of 2 percentage points, based on the 95% confidence interval.