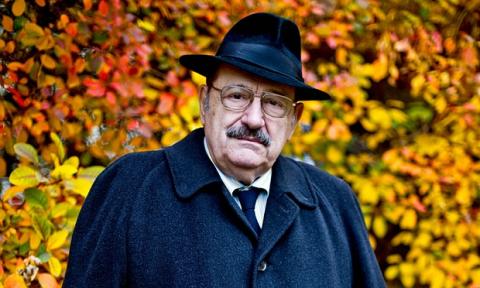 Umberto Eco was an Italian Professor of Semiotics who in his middle years became an international bestselling novelist with his medieval detective story The Name of the Rose. Most of us don't, I suppose, know much or perhaps anything about semiotics. Indeed, whenever I come across the word I have to resort to the dictionary to remind myself of its meaning. (“The science of sign-signals in language”, if you really want to know).

Eco was immersed in the Middle Ages, which he regarded as a fruitful time, and in the Ancient World; he once said that you should remember that any idea you have might not be original: “Aristotle will always have thought of it before you”. In short he was the very model of the high-powered intellectual, collecting honorary degrees by the score from universities all over the world. And yet The Name of the Rose sold 10 million copies worldwide and was turned into a film starring Sean Connery; while his later novels Foucault’s Pendulum and Baudolino were almost as successful.

So how did this ingenious academic manage it?

Well, intellectual though he was, with a personal library of some 50,000 books, Eco didn’t immure himself in the proverbial Ivory Tower. A whisky-drinker with, for most of his life, a 60 cigarettes a day habit, he was an accomplished journalist and early media don, who adored popular culture, starting with the comic books of his childhood. “I suspect,” he said, “that there is no serious scholar who doesn’t like to watch television.” Starsky and Hutch, Miami Vice and, most of all, Columbo were among his favourite programmes. (I don’t know if he watched Dad’s Army, but in certain photographs he bears a striking resemblance to Arthur Lowe’s Captain Mainwaring.)

Despite taking himself seriously, he was also able to laugh at himself. Writing a novel “became like a video game in which I might take on the personality of a warrior and enter a sort of magical kingdom”. “I always assume,” he said wisely, “that a good book is more intelligent than its author. It can say things that the writer isn’t aware of.” And this is surely one reason for his success and popularity.

His medieval murder mystery, The Name of the Rose, tapped into the same sort of fantastical themes as Indiana Jones and the Raiders of the Lost Ark. There is the fascination of a lost manuscript - in this case the missing volume of Aristotle’s Poetics, which is regarded by the Catholic Church as heretical, the quest for it triggering a succession of murders in the monastery. The investigating monk gets his name, William de Baskerville, from Sherlock Holmes’ most famous case, and it is all given an erudite intellectual gloss, which impresses and may delight the reader.

One friendly critic indeed told Eco that “the main appeal of your work for the lay reader is the humiliation he feels for his own ignorance, which translates into a naïve admiration of your pyrotechnics”. This is a fair comment, yet inadequate, and not only because readers’ admiration is not necessarily “naïve”. The reader may also be flattered by the author’s assumption that he is capable first of understanding Eco’s material and then being entranced by it.

We live in an age fascinated by conspiracy theories and fakes. Think of the success of pseudo-scholarly books about the ‘Merovingian line’ and the ‘Holy Blood’. Much of Eco’s scholarly and imaginative life may have been spent in the Middle Ages - when he was a student in Paris he confined himself for months to streets which had existed in medieval times – but he was also alert to this modern fascination. The Name of the Rose and Foucault’s Pendulum point the way to Dan Brown’s The Da Vinci Code.

“Dan Brown,” he quipped in a Paris Review Art of Fiction interview, “is a character from Foucault’s Pendulum. I invented him. He shares my characters’ fascinations – the world conspiracy of the Rosicrucians, Masons and Jesuits. The role of the Knights Templar; The hermetic secret. The principle that everything is connected. I suspect that Dan Brown might not even exist.” This is a joke of course, but one reason for Umberto’s Eco’s enormous popularity, and the delight readers experience in reading his novels, is that he has the rare talent of combining scepticism with the ability to play intelligently with such ideas. He knew there is no single “hermetic secret” nor a real verifiable history of the Knights Templar, but he understood why people respond to mysteries and the idea that there are hidden sources of esoteric knowledge which may shape the world.

Eco loved the idea of “fakes” and was aware of the influence or power they may have. The hero of his novel Baudolino is a trickster boy living at the court of the Holy Roman Emperor, Frederick Barbarossa. He invents fakes, forges documents, one of them proving the reality of the story of the Holy Grail.

Fakes, Eco said, can produce reality. The story of Prestor John was nonsense, a fake indeed, but it set people searching for a Christian kingdom in Africa. Or take “The Protocols of the Elders of Zion”. The world knows this was a forgery, but “it corroborated Nazi ideology and so paved the way in a sense for the Holocaust,” he mused. Hitler “might have known it was a fake, but in his mind it described the Jews exactly as he wanted them to be, and so he took it as authentic”.

Other fakes, of course, may be fun. The boy character in Baudolino is delightful fun; the reader revels in his audacity and trickery. But Eco knew that fakes, if believed in, can be dangerous.

Umberto Eco’s popular success, coming in middle-age, was as well-deserved as it was remarkable. He took material which had been for the most part the property of middlebrow or lowbrow sensational novelists – Dennis Wheatley, a precursor of Dan Brown, being one such example - gave it an erudite twist and made it intellectually respectable. He incarnated one of the paradoxes of our time: that a society whose values are social and materialist, a society which has for the most part rejected transcendental religion, a society in which fewer people believe in personal immortality than at any time since the dawn of the Christian era, was nevertheless eager for stories about arcane mysteries and magic. Harry Potter and Twilight’s vampires were among his heirs.

However, not everyone held him in high esteem. Reviewing Foucault’s Pendulum, the Osservatore Romano, the newspaper of the Holy See, condemned the novel for being “full of profanations, blasphemies, buffooneries and filth, held together by the mortar of arrogance and cynicism”. This is not a review that any author can be expected to welcome, but Eco’s amused response was that he had recently been given honorary degrees “by two Catholic universities, Leuwen and Loyola”.

Salman Rushdie was another hostile critic of that novel. It was “humourless, devoid of characters, entirely free of anything resembling credible spoken word, and mind-numbingly full of gobbledygook of all sorts.” Caliban’s response to seeing his own face in the glass, some of Rushdie’s own harsh critics might retort.

Given that it took Eco eight years to research, brood on and write Foucault’s Pendulum he would have had reason to be aggrieved, but I expect he was philosophical enough to know that you can’t please everyone. As for the “filth” with which the papal newspaper charged him, there are very few sex-scenes in his novels – some say only two. He himself sensibly remarked that he preferred having sex to writing about it (a remark I am sure caught the attention of his wife, Renate, whom he married in 1962 and survives him with their two children). Nevertheless there was something defensive, or at least self-deprecating, about him. Why else, in view of his world-wide popularity, would he have described himself as “a serious professor who writes novels during the weekend”?

In the wake of his death, I expect there will be many quick to hail him as a great novelist. I don’t think he was that in the sense that Proust and Mann can be called great. He doesn’t tell us enough about ourselves or the world we actually live in. In this respect he is less than other 20th century Italian novelists – Lampedusa, Bassani, Sciascia, for example.

But Umberto Eco was undoubtedly a great entertainer and a highly intelligent one. The Name of the Rose and Baudolino should continue to delight for a long time. I am less sure about Foucault’s Pendulum if only because I remember getting stuck, on account of boredom, half-way through.

Moreover he will continue to interest critics and be the object of critical studies as an intellectual. Like the French philosopher Roland Barthes before him, Eco was fascinated by popular culture, and possessed the rare ability to make material more commonly the property of trashy novelists, something that was intellectually and aesthetically satisfying.

Then I remember that he once wrote a semiotic study of a Bond novel. I haven’t read it because I’m not up to understanding semiotics, but I’m sure it’s fascinating for those who don’t have to consult the dictionary for the meaning of the word.