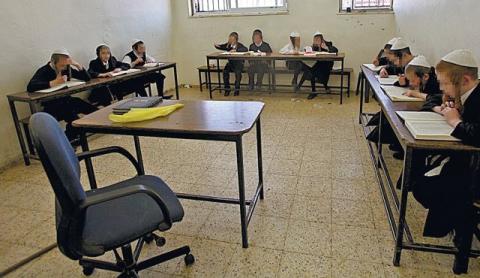 Of the ultra-Orthodox Jewish schools whose students were tested, 44% ranked in the bottom decile, meaning the bottom 10%.

Pupils at Israel's ultra-Orthodox elementary schools did worse in scholastic achievement tests than their peers at secular and state religious schools. The Meitzav exam, as it is known, is administered to pupils in elementary and junior high. It gauges the children's command of math, English, science, and language skills.

A classroom in the ultra-Orthodox Jerusalem neighborhood of Mea She’arim.
Photo by Gil Cohen-Magen.

In the Haredi schools, the test was only administered at 20% of the schools, and only to pupils in the 5th grade. Moreover, they were only tested for Hebrew and math. But although the country's schools are required to administer the Meitzav, most ultra-Orthodox schools do not do so. It is therefore impossible to determine if the results in the Haredi community are representative of the scholastic achievements of the 200,000 students in the ultra-Orthodox community as a whole.

TheMarker and the Madlan real estate website have obtained data released last week from last year's tests and compared it with achievement scores at other Israeli schools. It shows that of the ultra-Orthodox schools whose students were tested, 44% ranked in the bottom decile, meaning the bottom 10%. Another 14% scored in the second decile (between the 10th and 20th percentiles ). Only eight ultra-Orthodox schools, 5% of those for which there is data, achieved the highest ranking on the Meitzav.

The Education Ministry does not have information reflecting the full picture at the country's Haredi schools, but even the partial measure provides more than a hint of substandard scholastic achievement in the core curriculum subjects at other Israeli schools. During the 2011-2012 school year, the Education Ministry cut about NIS 35 million in allocations from 90 Haredi schools that had failed to teach core subjects, which marks a substantial change in enforcement of policy.

According to the Taub Center for Social Policy Studies, 48% of elementary school students are enrolled in either Haredi schools or schools in the Arab community, compared with 38% in Hebrew-speaking state secular schools.