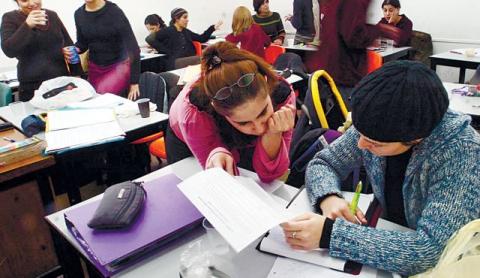 A new study finds more ultra-Orthodox are pursuing studies than previously thought, but women have fewer career ambitions.
The number of ultra-Orthodox students in institutions of higher learning has doubled in the last six years, going from 3,000 in the 2005-2006 academic year to 7,350 in 2011-2012, but the potential for increasing the number has yet to be exploited, the Technion's Samuel Neaman Research Institute says in a report published this week.

That is a bigger number than the Council for Higher Education's estimate, which says there are 6,000 ultra-Orthodox students. The larger numbers in the Technion survey, which was conducted as part of the army's Shahar program, designed to increase ultra-Orthodox integration into society and the labor force, reflect the inclusion of additional institutions, not covered by the council.

As big as the number is, the Neaman Institute thinks there is a great deal of potential for additional Haredi students to get a higher education, particularly among women. In addition to the 3,500 female students now in higher learning institutions, there is a potential for the number to grow to 7,000, according to the study.

The estimate is based on an earlier study by the research division at the Ministry for Industry, Trade and Labor, which showed that 30% of ultra-Orthodox men aged 17-20 view general studies as a legitimate life option. The numbers were confirmed in other surveys as well. Among women, however, 70% said they looked at general studies as a legitimate option for themselves.

The government is determined to bring more ultra-Orthodox into the workforce to help boost economic growth and wean them off state stipends. Aside from religious objections to Haredi men working instead of devoting themselves to Torah study, one of the biggest obstacles to bringing them into the workforce is the fact the Haredim get very little schooling in core subjects like math and English that they need for most jobs.

The Neaman study showed that, barring other impediments, the optimal number of ultra-Orthodox students would reach 20,000, half of them women. Given these numbers, it appears that Haredi men are already fulfilling the estimated quota, and that the real potential for increased numbers lies with the women.

Lead researcher Ilia Zatcovetsky says the unfulfilled potential may be a result of insufficient resources given to women who are considering higher level studies. "In addition, the courses currently open to this population are restricted to law and business administration. If options are expanded, student numbers will grow," he says.

Zatcovetsky's research determined that "the aim of higher education for ultra-Orthodox women is to enable them to set up and manage a household. Graduates of seminars are therefore mainly interested in providing for their families." "Academic studies are only pursued as an option if it turns out that there is little demand for a trade or profession acquired in earlier studies. At this point, only a few ultra-Orthodox females acquire a profession with a high market demand."

Zatcovetsky says he believes that the next several years will see a surge of new ultra-Orthodox students, both male and female. "The sector is undergoing accelerated changes, and this is reflected in the number and composition of students," he says. "As long as they don't feel that they are being coerced, we will see an increased flow of students into institutions of higher learning, as well as in conscripts to the IDF. As more ultra-Orthodox men see others studying and earning well, they will also express interest in higher learning. What is needed is a conceptual shift."

The trends noted by Zatcovetsky are also observed in the accelerated entry of ultra-Orthodox men into the labor force. According to Bank of Israel numbers, 45% of Haredi men were employed in 2011, as opposed to 39% in 2009. Some 60% of Haredi women are employed, a proportion that has stayed stable over the last two years. However, while increasing numbers of Haredi men are seeking employment after obtaining an academic degree, Haredi women often work without one, after graduating from teacher colleges.

According to Reuven Gal, head of the Shiluv project at the Neaman Institute, the potential for Haredi students is even larger than that suggested by the research. "We observe a growing trend to integrate general studies with studies at a yeshiva. There is a quiet revolution going on in the Haredi sector, with increased numbers seeking work and general studies, as well as enlistment in the IDF, without abandoning their way of life and loyalty to their community."