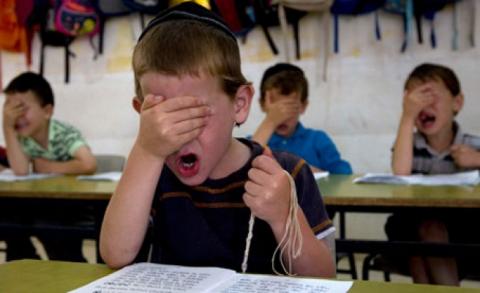 Ultra-Orthodox Jewish parents and teachers are warning that schools may go underground and children be educated at home if the government presses ahead with guidance on teaching about same-sex relationships and gender reassignment.

Members of the Haredi, or ultra-Orthodox, community also say that some parents may leave the country rather than see their children taught about “alternative lifestyles”. Lawyers for Shraga Stern, a Haredi parent, recently sent a letter to the secretary of state for education, Damian Hinds, saying: “Many members of the community would choose to leave the United Kingdom for a more hospitable jurisdiction rather than comply with such an obligation to mention homosexuality or gender reassignment in a positive context at school.”

Stern said sex education was a “private matter” within families and it was inappropriate to teach “innocent children” about such things. “We teach our children, at home and in school, to respect every person, but we will not teach them about LGBT issues,” he told the Observer.

Stern, who has seven children aged between one and 12, said he faced four options if the DfE advice was formally issued: to launch a legal challenge; to leave the country; to “go underground” or home school his children; or for his children’s schools to refuse to comply as a “badge of honour”.

Although the guidance is non-statutory, Ofsted inspectors and the DfE will take it into account when assessing schools or taking action. The advice is expected to be formally issued later this year.

According to figures released by the Institute for Jewish Policy Research (JPR) last week, more than 20,000 children in the UK attend state-funded and independent ultra-Orthodox schools. In addition, a “significant number of Haredi teenagers” study in yeshivas (religious schools) not included in DfE figures, said the JPR. A report published by Hackney council this month said that up to 1,500 Jewish boys were attending 29 unregistered yeshivas in the area, which includes a large Haredi population.

At Beis Soroh Schneirer, an independent school for 280 Haredi girls aged three to 11 in Hendon, north London, proprietor Rabbi Anthony Adler quoted Leviticus 18, the biblical passage that describes homosexual relations as “an abomination”. He said: “We teach our children British values such as the rule of law, mutual respect and tolerance, but we will not spell out alternative lifestyles. We want to preserve their innocence and purity.”

Rabbi Avrohom Pinter, the principal of Yesodey Hatorah, a state-funded girls’ secondary school in Stamford Hill, said: “We are totally opposed to homophobia. The issue for us is maintaining the innocence of our children. We feel society is sexualising children at an early age and we don’t want to do that.”

Last year Yesodey Hatorah was classed as inadequate by Ofsted inspectors, who found that books had been heavily censored or redacted to block references or images that the school felt inappropriate, including passages from Sherlock Holmes, references to human or animal reproduction, and images showing bare ankles and wrists.

“Many parents are concerned about children going to libraries. We need to provide a safe space,” said Pinter. “Sometimes we might have gone a bit overboard in our redactions to gain the confidence of the parents. We’re reviewing it all now.”

Ofsted has been accused by the Haredi community of being “unduly obsessed” with its schools and of being driven by a “secularist agenda”. According to Geoffrey Alderman, a prominent member of the Orthodox community, “it’s now a badge of honour for Orthodox Jewish schools to be failed by Ofsted on the grounds they are not teaching about alternative lifestyles. As Jewish parents are searching around for schools, they’re particularly interested in ones that have been criticised by Ofsted.”

Last July, Ephraim Mirvis, the chief rabbi, said that relations between Ofsted and the community “urgently need to be repaired”. According to Pinter, there has been a “more conciliatory” approach in recent months.

An Ofsted spokesperson said the vast majority of faith schools provided a good or outstanding education, including 87% of Jewish state faith schools. “Most faith schools – state and independent – see no contradiction between teaching the tenets of their faith and the legal requirement to promote British values, including respect for democracy and the rule of law or to encourage respect for people with different characteristics such as those of a different faith, sexual orientation or race.

“However, for the small minority who will not comply with the law, it is Ofsted’s duty to report those failings so that action can be taken to improve or close these schools.”

The DfE said a consultation on the draft advice had now closed and it was considering responses. Stern said he was “confident that the government understands [its advice] is a red line that will never be crossed. Something will be worked out.”