Transparent gravestones remind of the lost world of Jewish cemeteries 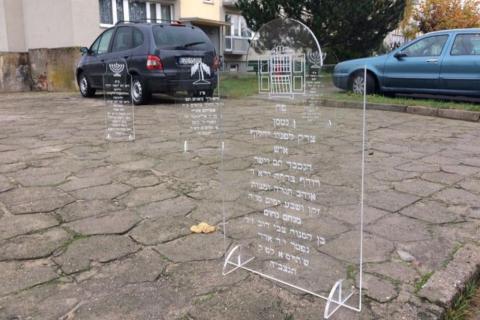 Transparent matzevah, Jewish tombstones, are being placed in public spaces and documented as a reminder of the graveyards that once stood on the same spot. ‘Currently Absent’ (Obecnie Nieobecni) is a photographical historical project which aims to commemorate the presence of the Jewish minority, which used to coexist alongside its Christian neighbours in pre-war Poland.

Katarzyna Kopecka, Piotr Pawlak and Jan Janiak came up with the idea three years ago. They created a list of 500 places which formerly served as Jewish cemeteries – holy places which should have remained undisturbed in perpetuity. However, history proved unkind and many of them are now schoolyards, parks, roads or car parks.

The trio behind the initiative wrote on their website: “Our main purpose is to temporarily recreate manifestations of our past in order to refer it to our present. The unreal transparency of matzevah will symbolise the decline of those kind of sacred places in Poland. Through the cemeteries we would like to show the centuries’ long manifestation of Jewish culture in Poland.”

The three friends, ethnologists and photographers by profession, first focused on their local region, Łódź city and its surroundings, where they identified 30 destroyed cemeteries, now overtaken by the growing town. With tombstones made of plexi-glass and adorned with traditional Hebrew inscriptions, they set out to document the gone and forgotten cemeteries.

“In the last few decades they were gradually vanishing from our landscape, being replaced by parks, playgrounds, houses or other kinds of buildings,” write the initiators of the ‘Currently Absent’ project. “We want to find those places and situate realistic, transparent matzevah with traditional inscriptions in Hebrew there. The installation will be photographed to capture the symbolic presence of the necropolis in the region. The photographs will be later be published in a dedicated album and also in a gallery exhibition, showing the diffusion of both cultures.”

Before Second World War there were over three million Jews living in Poland – approximately 10 percent of the entire population. With Holocaust came not only the genocide of the people, but also the destruction of their material culture and places of worship. Even after the war the Jewish tombstones were used as construction materials for roads and buildings.

The ‘Currently Absent’ project serves as a reminder of those sacred spaces that disappeared. While the installations are temporary, the photographs taken create a permanent documentation of many former Jewish necropolis. The result of the project have already been exhibited at the Polish Parliament and the Museum of the History of Polish Jews POLIN. The project is still ongoing.