Toward a More Reflective Planet 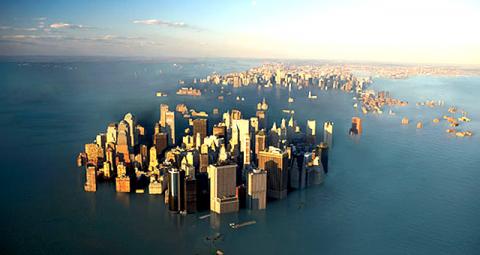 The last time the atmosphere held as much carbon dioxide as it does today was about three million years ago – a time when sea levels were 10-30 meters higher than they are now. Climate models have long struggled to duplicate those large fluctuations in sea levels – until now. Indeed, for the first time, a high-quality model of Antarctic ice and climate has been able to simulate these large swings. That is smart science, but it brings devastating news.

The new model shows that melting in Antarctica alone could increase global sea levels by as much as one meter (3.2 feet) by the end of this century – well above prior estimates. Worse, it suggests that even extraordinary success at cutting emissions would not save the West Antarctic Ice Sheet, locking in eventual sea-level increases of more than five meters. As little as one meter could put at risk entire cities, from Miami to Mumbai, and cause enormous economic disruption.

Mark Leonard, Director of the European Council on Foreign Relations, examines how Kofi Annan, George Soros, Peter Sutherland, and others are thinking about a challenge that is only getting bigger. We need to turn down the heat – and fast. To this end, albedo modification – a kind of geoengineering intended to cool the planet by increasing the reflectivity of the earth’s atmosphere – holds tremendous promise.

Injecting synthetic aerosols that reflect sunlight into the stratosphere, for example, could help counter the warming caused by greenhouse gases. The mechanism is similar to wearing a white shirt in the summer: white reflects sunlight and cools what is underneath, whereas darker colors absorb sunlight and heat.

To be sure, even in the best-case scenario, solar geoengineering alone could not stabilize the world’s climate. For that, we must both stop pumping carbon pollution into the atmosphere and learn how to remove what is already there. That is why emissions cuts should receive the lion’s share of resources devoted to combating climate change.

But, as the recent study shows, emissions cuts alone cannot save the West Antarctic Ice Sheet and prevent a drastic sea-level rise. If they are pursued in conjunction with moderate albedo modification, however, there is a chance of halting rising temperatures, helping to keep the world under 1.5° Celsius above pre-industrial levels, the more ambitious target agreed at the Paris climate talks last December. (It should be noted that, given carbon-cycle feedbacks, such as the thawing of permafrost, there is a chance that the world would face a 1.5°C rise, even if emissions were eliminated today.)

Most of the world’s state-of-the-art climate models have explored albedo modification, and each of them has found that the process does have the potential to mitigate climate change. Beyond limiting total warming, it can help to check the rise in peak temperatures, decreasing the risk of destructive heat waves. And it seems to be particularly effective at reducing extreme rainfall, which holds profound implications for minimizing flood damage.

Albedo modification remains uncertain and risky, owing partly to a dearth of organized research into the subject. And, in fact, albedo modification would undoubtedly make some things worse. But there is not a single climate model run that shows that a moderate intervention would make any region worse off overall. Moreover, the large potential upside, measured in trillions of dollars, contrasts with low direct costs – in the single-digit billions for full-scale deployment. In fact, albedo modification is so cheap that direct costs will not be the deciding issue. Instead, it is a risk-risk trade-off – one that will require more research to assess.

Given the lack of knowledge, no sensible person would push for deploying albedo modification today. But it would make no sense to ignore its potential. After all, no one would argue that we should abandon research on a promising cancer drug because it is unproven. The US National Academy of Sciences first called attention to what it then described as “climate modification” in a 1983 report. It recommended careful research in 1992 and again in 2015. Major environmental groups such as the Environmental Defense Fund and the Natural Resources Defense Council support careful, small-scale research. Yet no such program exists.

One reason for this is concern about the diversion of resources from other approaches. And, of course, there are tradeoffs. But the US, for example, has an annual climate science budget of around $3 billion. An exploratory solar geoengineering program, costing only a few tens of millions of dollars per year, is entirely feasible.

A larger obstacle to progress is fear that more attention to geoengineering solutions would sap motivation to cut emissions. Maybe so, but it would be barking mad to take up smoking simply because an experimental cancer treatment showed some promise on a lab rat. And, in fact, it is conceivable that a concerted effort to advance research on albedo modification could spur action to cut emissions, much like a graphic look at the side effects of chemotherapy prompts some to stop smoking.

Whichever reaction prevails, the moral imperative to explore a technology that can protect the poorest and most vulnerable this century would seem to trump amorphous concerns that doing so could weaken the incentive to pursue solutions that would largely benefit future generations.