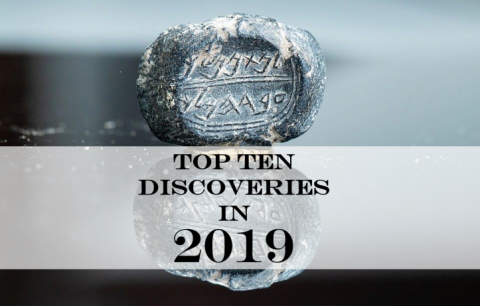 A 2,600-year-old bulla (seal) from the Kingdom of Judah bearing the inscription "[belonging] to Nathan-Melech, Servant of the King," unearthed in Jerusalem's City of David earlier this year, has topped the list of top ten discoveries in biblical archaeology in 2019, compiled by the Bible Archaeology Report.

Both the title 'Servant of the King' and the name 'Nathan-Melech' appear in the Hebrew Bible, the latter in II Kings 23:11, where he is described as an official in King Josiah's court.

According to the Bible Archaeological Report, epigrapher Christopher Rollston, who the publication says is known for his "cautious approach" to inscriptions, concluded that the “data converges to make it probable that the figure of the Bible and the figure of this bulla are one and the same… as for me, I am entirely comfortable considering it most likely, or virtually certain, that 2 Kings 23:11 and this bulla refer to the same person.”

The discovery of a horn purported to be one of the four corners of God's ancient altar, as described in the biblical book of Kings, took second place on the 2019 list.The horn was found in the West Bank town of Shiloh in August by a team of 200 archaeologists and volunteers under the guidance of Dr. Scott Stripling, director of excavations and head of the Associates for Biblical Research.

"When the news reached Joab, who had conspired with Adonijah although not with Absalom, he fled to the tent of the Lord and took hold of the horns of the altar," reads a passage in Kings.According to the biblical account, the tabernacle housing the Ark of the Covenant once stood in the area."

The sacred work of the ancient Shiloh team, which is leading to the discovery of important findings, gives us, again and again, a clear proof of the roots of the Jewish people in our promised land," commented Binyamin Council head Israel Gantz, congratulating the team for their achievements.Nine of the ten archaeological entries on the list were uncovered in Israel, the outlier being a stone alter discovered at Ataroth in modern Jordan.

Other finds on the list include the unearthing of a section of wall in Lachish that dates to the time of Rehoboam, Solomon's son.2 Chronicles 11:5-10 notes “Rehoboam lived in Jerusalem, and he built cities for defense in Judah. He built Bethlehem, Etam, Tekoa, Beth-zur, Soco, Adullam, Gath, Mareshah, Ziph, Adoraim, Lachish, Azekah, Zorah, Aijalon, and Hebron, fortified cities that are in Judah and in Benjamin,” prompting Bible Archaeology Report to note: This discovery is further archaeological evidence of the establishment of the Kingdom of Judah as the Bible describes.

The publication describes its purpose as being "to highlight archaeological findings that demonstrate the historical reliability of the Bible.""Each year, discovery after discovery adds to our knowledge of the biblical world and helps us understand Scripture in greater detail," wrote its head, Bryan Windle. "None of these discoveries prove the Bible is true. They do, however, add to the mounting evidence that demonstrates that the Bible is historically reliable."2019 was a year in which significant discoveries were unearthed; I look forward to the discoveries in the coming year," he said.