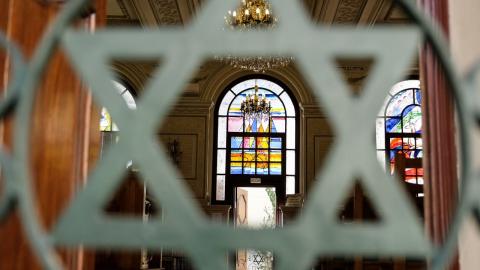 In a year in which we expected the news to get better, the stories followed most closely by the Jewish community in 2021 were for the most part sequels to the difficult and dire stories of 2020: COVID-19, surging antisemitism and strife between Israel and Hamas in Gaza. But a new government in Jerusalem and Israel’s broadening ties to Arab countries brought glimmers of hope for peace. Here are the 10 most important stories on topics of Jewish concern this year:

In June, after four indecisive elections in two years, Israeli leaders Naftali Bennett and Yair Lapid assembled a broad-based coalition that enabled Bennett to replace Netanyahu as prime minister. In power for 15 years, Netanyahu was the longest-serving PM in the nation’s history.

An early major achievement of the new coalition was the Israeli parliament’s adoption of a national budget, something that had not been done for three years.

In May, 11 days of military hostilities between the Gaza-based Hamas terrorist group and Israel resulted in Arab-Jewish unrest in several Israeli cities. Hamas launched more than 4,000 rockets from Gaza toward the Jewish state, including the holy city of Jerusalem for the first time.

Israel responded to the attacks with strong military action and defended itself with the “Iron Dome” anti-rocket defense system.

3. Antisemitism continues to rise in the West.

The year saw a continuing antisemitic upsurge, especially in the United States, Britain and continental Europe. The mounting anti-Jewish attacks were both verbal and physical. Several members of the U.S. Congress spewed obscene anti-Jewish conspiracy theories and antisemitism was an integral component of the Jan. 6 insurrection at the U.S. Capitol.

The “Abraham Accords” were strengthened in 2021 as Israel continued to increase its diplomatic, tourism, security and economic links with the United Arab Emirates, Bahrain, Oman and Morocco. Bennett’s December visit to Abu Dhabi in the UAE was an historic first.

5. Synagogues adapt to COVID-19 with innovation.

Faced with the continuing global COVID-19 pandemic, synagogues around the world made significant innovations for new creative forms of worship, study and other activities that had always been in-person events.

“Sofa synagogues” electronically linking geographically separated people via the internet became the norm. Many of these solutions are likely to become fixtures of Jewish life even when and if the dangerous virus is finally crushed.

Many Orthodox Jews in Israel, the U.S. and other regions of the world remained unvaccinated against COVID-19. Their refusal reflected the increasing tension and polarization that exists within the global Jewish community. Both Israeli chief rabbis urged vaccinations as a way of curbing the number of infections and deaths, but other prominent Orthodox leaders refrained from endorsing anti-COVID-19 measures.

8. Women of the Wall break through.

For decades, the Israeli organization Women of the Wall has pressed for the right of women to worship publicly at Judaism’s most holy site, the Western Wall, a remnant of the Holy Temple in Jerusalem. Orthodox Jewish authorities who control access to the Wall have just as adamantly forbidden public prayers by women at the sacred site.

But after several significant court victories and the change in the Israeli government, Women of the Wall seemed to have turned the tide. In November, Israeli police at the Wall protected a group of 300 women and men who came to pray there from the intense harassment of thousands of young Orthodox men.

10. Burgeoning numbers of Orthodox Jews are led by young people.

A Pew Research survey showed Orthodox Jews constitute only 9% of the American Jewish community. But in the 18-to-29 age group, the share of Orthodox Jews rises sharply to 17% of all Jews in that vital young adult cohort. The survey also indicated a total U.S. Jewish population of 7.5 million, an increase from 6.8 million eight years ago. Much of that increase came from Orthodox Jews.