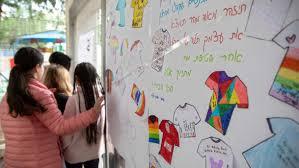 Several Israeli school districts held impromptu tolerance classes on Sunday after the country's education minister, an Orthodox rabbi, gave an interview for in which he attacked the LGBT community.

Asked by Israeli daily Yedioth Ahronoth how he would respond had one of his children identified as gay, Education Minister Rafi Peretz said that he raised them "in a natural and healthy way," and for that reason they don't have a "different" sexual orientation and are "building their homes based on Jewish values."

Peretz, who is head of the right-wing Habayit Hayehudi party, also noted that "a man and a woman" are the definition for a "normative family." Asked whether gender reassignment was possible, he answered that "this is the kind of question that necessitates a lot of discussion. I can't provide a laconic answer."

At the Ma'ayan Shahar school in the Emek Hefer region north of Tel Aviv, the students' homeroom teachers began the day with a discussion of the comments, providing the stusents with copies of the newspaper interview. There was also presentation about the purpose of democracy and upper grades at the school were invited to give short speeches about Peretz's remarks.

Several students took the minister to task for his comments, while others took exception to remarks that Peretz made in support of annexation of the West Bank and seemingly mysognistic comments about Knesset member Ayelet Shaked.

Another student defended Peretz, saying he is an individual living in a democratic country who has the right to express his opinion even if it is not popular. A 12th grade student who followed him on stage vehemently disagreed. He's not an ordinary citizen, she said, or even an ordinary Knesset member. He's the education minister and he's therefore subject to limitations, she claimed, and cannot speak in a way that might harm LGBT children or children whose parents are members of the LGBT community.

"It was a respectful discussion in which all of the relevant points came up," the school's principal, Menashe Levy, told Haaretz.

Tel Aviv schools opened the school day with 15 minutes of discussion on the topic "tolerance, living together and variations on the concept of family." The discussion was held on instructions from the head of the city's education administration, Shirley Rimon-Bracha, and with the support of Mayor Ron Huldai.

The Thelma Yelin High School in Givatayim held a panel discussion in which teachers from a variety of backgrounds – heterosexual, gay, secular and religious – participated.

Students came to school an hour late in a number of locations, including Tel Aviv and Kfar Vradim and Kiryat Tivon in the north and black flags were posted at school entrances. "The education minister has to be a person who educates about the values of democracy and equality," said Tami Yakiri, one of the leaders of the protest.

On Saturday, Tel Aviv Mayor Ron Huldai released a statement attacking Peretz for "thinking he has a rubber stamp from the heavens to determine what is natural and what is normative." He said he will not remain silent and will for fight for the values of a democratic society.

Justice Minister Amir Ohana (Likud), who is Israel's first openly gay minister, said that Peretz's remarks were "miserable, dark and wrong." His words "are not based on knowledge and facts, but rather on prejudice," Ohana charged.

This is not the first time Peretz has voiced controversial remarks targeting the gay community. Last year, upon his appointment as education minister, he told Israel's Channel 12 News that it was "possible to convert" homosexual and lesbian individuals, claiming that he had facilitated such therapy in the past.