Today the world has uncanny parallels to 1945 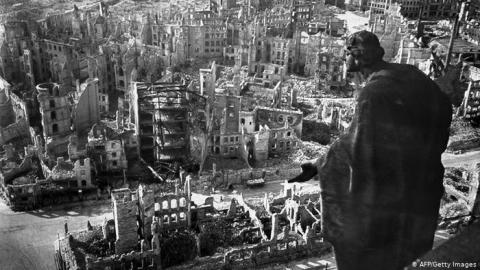 Victory in Europe was made possible by a remarkable military collaboration between the main anti-Axis powers – the US, Russia and Britain. But the three-way relationship, between Franklin D Roosevelt, Joseph Stalin and Winston Churchill, was never easy, and it set a pattern of national rivalry, suspicion, fear and distrust that persists to this day.

A row over a top-secret message, known as SCAF-252, sent to Stalin in late March 1945 by Gen Dwight Eisenhower, the supreme allied commander, shows how fraught the relationship could be. In it, Eisenhower detailed his plans for the final defeat of Nazi Germany – but omitted to first consult or inform his British allies.

Stalin was determined the Red Army would be the first to get to Berlin and topple Adolf Hitler, attaching great symbolic importance to capturing the capital of the Third Reich and its implications for the future European order. Churchill took a similar view, but Eisenhower and a distracted, ailing FDR were not thinking politically.

Stalin, replying to the SCAF-252 signal on 1 April, encouraged the Americans’ belief, which he did not share, that Hitler would make a last-ditch stand in the Alps in May. He approved Eisenhower’s plan to send US forces south, away from Berlin, telling his trusting ally that “Berlin has lost its former strategic importance”.

Meanwhile, he secretly ordered Marshal Georgy Zhukov, his top commander, to immediately encircle the city with 2.5 million troops to ensure the Americans and British did not enter, and to launch an assault “no later than 16 April”. As the historian Antony Beevor has noted, “it was the greatest April Fool in modern history”.

The British, in particular Field Marshal Sir Bernard Montgomery, were furious at being bypassed. Churchill worried, rightly as it turned out, that Stalin was intent on bringing as much of Europe as possible under Soviet communist rule, and was already breaking his Yalta conference pledge to respect Poland’s independence.

“There is no doubt that he [Eisenhower] is a most attractive personality and at the same time [has] a very, very limited brain from a strategic point of view,” snarled Field Marshal Sir Alan Brooke, quoted by Beevor in his 2002 book, Berlin: The Downfall 1945. But Churchill could only fume impotently.

“Although I have tried in every way to put myself in sympathy with these communist leaders, I cannot feel the slightest trust or confidence in them. Force and facts are their only realities,” Churchill said. By 8 May, Berlin had fallen to the Red Army, Hitler was dead, and Stalin had his victory.

Tensions between the emerging US superpower and a weakened, indebted Britain clinging to its empire, continued through the postwar period. As the author Robert Worth has argued, the idea that Britain was happily content to pass the baton of global leadership to Washington after 1945 is a myth. “The British did all they could to maintain their overseas empire and deeply resented American efforts to displace them,” Worth wrote.

The Americans opposed British colonialism. But, the British said, the US merely replaced it with a de facto colonialism of their own. This rivalry produced myriad overt and covert tussles for power and influence, particularly in the Middle East.

The US, for example, initially backed Iran’s nationalist prime minister, Mohammad Mosaddegh, who, during a 1951 US speaking tour, likened himself to a patriot from the American war of independence fighting British imperialism. Washington, fearful Iran might turn communist, changed tack two years later and backed a British coup plot against Mosaddegh that led ultimately to the 1979 Islamic revolution.

In another cloak-and-dagger episode, an American spy masquerading as a foreign correspondent attempted to recruit Egypt’s King Farouk, a British client. The mission was known within the CIA as Operation Fat Fucker. Farouk was later overthrown in a 1952 coup led by Gamal Abdel Nasser, whom US agents had befriended, which, in turn, led to Britain’s 1956 Suez humiliation.

Churchill hated Britain’s new-found subservience, but urged his successors to stick to his maxim: “Never be separated from the Americans”. To a large degree, they have. With the exception of Harold Wilson, who broke with Washington over the Vietnam war, later British prime ministers have followed America’s lead on most international issues.

And concerning relations with Russia, British and US policy became largely indistinguishable during the cold war. Stalin’s fear in 1945 that western powers would cut a “secret deal” and unite to oppose the Soviet Union came true, exemplified in later years by a Nato alliance that included West Germany.

Today’s world bears some uncanny similarities to the world of 1945. Post-Soviet Russia under Vladimir Putin is again on the offensive, employing asymmetrical means such as info-wars and cyberhacks instead of armoured divisions to project its influence across Europe.

Boris Johnson’s post-Brexit Britain, having rejected the concept of a common European home, stands alone in ways not seen since 1940. Brexiters’ calls for a stronger US security, economic and trade relationship, to offset the EU rupture, are the modern-day equivalent of Churchill’s desperate “darkest hour” appeals for Roosevelt’s help.

As for the US, Donald Trump’s collusion with Putin’s Russia, and disdain for America’s European allies, is reminiscent of Roosevelt’s and Eisenhower’s naivety in 1945. Not for nothing is Stalin one of Putin’s great heroes.