Three scenarios for how this war ends 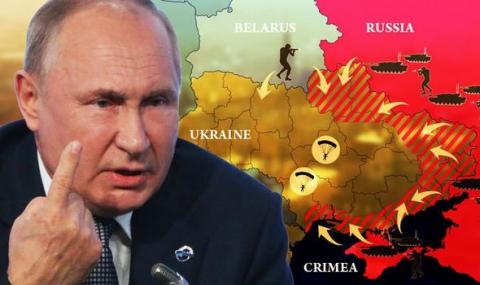 The battle for Ukraine unfolding before our eyes has the potential to be the most transformational event in Europe since World War II and the most dangerous confrontation for the world since the Cuban missile crisis. I see three possible scenarios for how this story ends. I call them “the full-blown disaster,” “the dirty compromise” and “salvation.”

The disaster scenario is now underway: Unless Vladimir Putin has a change of heart or can be deterred by the West, he appears willing to kill as many people as necessary and destroy as much of Ukraine’s infrastructure as necessary to erase Ukraine as a free independent state and culture, and wipe out its leadership. This scenario could lead to war crimes the scale of which have not been seen in Europe since the Nazis — crimes that would make Putin, his cronies and Russia as a country all global pariahs.

The wired, globalized world has never had to deal with a leader accused of this level of war crimes whose country has a landmass spanning 11 time zones, is one of the world’s largest oil and gas providers and possesses the biggest arsenal of nuclear warheads of any nation.

Every day that Putin refuses to stop, we get closer to the gates of hell. With each TikTok video and cellphone shot showing Putin’s brutality, it will be harder and harder for the world to look away. But to intervene risks igniting the first war in the heart of Europe involving nuclear weapons. And to let Putin reduce Kyiv to rubble, with thousands of dead — the way he conquered Aleppo and Grozny — would allow him to create a European Afghanistan, spilling out refugees and chaos.

Putin doesn’t have the ability to install a puppet leader in Ukraine and just leave him there: A puppet would face a permanent insurrection. So, Russia needs to permanently station tens of thousands of troops in Ukraine to control it — and Ukrainians will be shooting at them every day. It is terrifying how little Putin has thought about how his war ends.

I wish Putin was just motivated by a desire to keep Ukraine out of NATO; his appetite has grown far beyond that. Putin is in the grip of magical thinking: As Fiona Hill, one of America’s premier Russia experts, said in an interview published Monday by Politico, he believes there is something called “Russky Mir,” or a “Russian World”; that Ukrainians and Russians are “one people”; and that it is his mission to engineer “regathering all the Russian-speakers in different places that belonged at some point to the Russian tsardom.”

To realize that vision, Putin believes it is his right and duty to challenge what Hill calls “a rules-based system in which the things that countries want are not taken by force.” And if the U.S. and its allies attempt to get in Putin’s way — or try to humiliate him the way they did Russia at the end of the Cold War — he is signaling that he is ready to out-crazy us. Or, as Putin warned the other day before putting his nuclear force on high alert, anyone who gets in his way should be ready to face “consequences they have never seen” before. Add to all this the mounting reports questioning Putin’s state of mind and you have a terrifying cocktail.

The second scenario is that somehow the Ukrainian military and people are able to hold out long enough against the Russian blitzkrieg, and that the economic sanctions start deeply wounding Putin’s economy, so that both sides feel compelled to accept a dirty compromise. Its rough contours would be that in return for a cease-fire and the withdrawal of Russian troops, Ukraine’s eastern enclaves now under de facto Russian control would be formally ceded to Russia, while Ukraine would explicitly vow never to join NATO. At the same time, the U.S. and its allies would agree to lift all recently imposed economic sanctions on Russia.

This scenario remains unlikely because it would require Putin to basically admit that he was unable to achieve his vision of reabsorbing Ukraine into the Russian motherland, after paying a huge price in terms of his economy and the deaths of Russian soldiers. Moreover, Ukraine would have to formally cede part of its territory and accept that it was going to be a permanent no man’s land between Russia and the rest of Europe — though it would at least maintain its nominal independence. It would also require everyone to ignore the lesson already learned that Putin can’t be trusted to leave Ukraine alone.

Finally, the least likely scenario but the one that could have the best outcome is that the Russian people demonstrate as much bravery and commitment to their own freedom as the Ukrainian people have shown to theirs, and deliver salvation by ousting Putin from office.

Many Russians must be starting to worry that as long as Putin is their present and future leader, they have no future. Thousands are taking to the streets to protest Putin’s insane war. They’re doing this at the risk of their own safety. And though too soon to tell, their pushback does make you wonder if the so-called fear barrier is being broken, and if a mass movement could eventually end Putin’s reign.

Even for Russians staying quiet, life is suddenly being disrupted in ways small and large. As my colleague Mark Landler put it: “In Switzerland, the Lucerne music festival canceled two symphony concerts featuring a Russian maestro. In Australia, the national swim team said it would boycott a world championship meet in Russia. At the Magic Mountain Ski Area in Vermont, a bartender poured bottles of Stolichnaya vodka down the drain. From culture to commerce, sports to travel, the world is shunning Russia in myriad ways to protest President Vladimir Putin’s invasion of Ukraine.”

And then there is the new “Putin tax” that every Russian will have to pay indefinitely for the pleasure of having him as their president. I am talking about the effects of the mounting sanctions being imposed on Russia by the civilized world. On Monday, the Russian central bank had to keep the Russian stock market closed to prevent a panicked meltdown and was forced to raise its benchmark interest rate in one day to 20% from 9.5% to encourage people to hold rubles. Even then the ruble nose-dived by about 30% against the dollar — it’s now worth less than 1 U.S. cent.

For all of these reasons, I have to hope that at this very moment there are some very senior Russian intelligence and military officials, close to Putin, who are meeting in some closet in the Kremlin and saying out loud what they all must be thinking: Either Putin has lost a step as a strategist during his isolation in the pandemic or he is in deep denial over how badly he has miscalculated the strength of Ukrainians, America, its allies and global civil society at large.

If Putin goes ahead and levels Ukraine’s biggest cities and its capital, Kyiv, he and all of his cronies will never again see the London and New York apartments they bought with all their stolen riches. There will be no more Davos and no more St. Moritz. Instead, they will all be locked in a big prison called Russia — with the freedom to travel only to Syria, Crimea, Belarus, North Korea and China, maybe. Their kids will be thrown out of private boarding schools from Switzerland to Oxford.

Either they collaborate to oust Putin or they will all share his isolation cell. The same for the larger Russian public. I realize that this last scenario is the most unlikely of them all, but it is the one that holds the most promise of achieving the dream that we dreamed when the Berlin Wall fell in 1989 — a Europe whole and free, from the British Isles to Vladivostok.