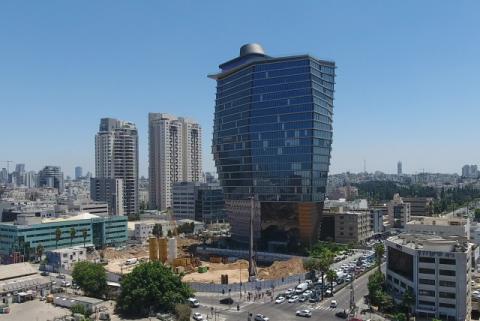 A Tel Aviv skyscraper has won the Council on Tall Buildings and Urban Habitat's award for the best tall building in the Middle East and Africa, Architect News reported Tuesday. Totzeret HaAretz (ToHa – "Made in Israel") Tower 1 by Ron Arad Architects and Yashar Architects, is located in downtown Tel Aviv on Totzeret Haaretz Street, and is within walking distance of the Azrieli Mall and the Tel Aviv Hashalom train station.

Spanning 30 floors and 125 meters, the building has a distinctive shape, which the architects claim is meant to resemble the shape of an iceberg, according to Walla. Beneath the tower itself are three legs, each with seven floors and housing technical infrastructure, according to Ynet.

The tower consists mainly of office space, with Globes reporting the largest tenant being Israeli unicorn start-up WeWork, but also has spaces for restaurants and a café. Completed in February 2019, it is the first of a three-building office complex, with the second set for inauguration in 2024, according to Emporis.This second tower, which will be connected to the first tower by a sky bridge on the 26th floor, is set to span 80 floors and 337 meters, making it the largest building in Tel Aviv, after Azrieli Sharona at 238 meters. However, ToHa would be topped by the 350 meter-high Spiral Tower announced by the Azrieli Group back in 2018 which, according to Globes, is due to be completed in 2026.

The award was given out at the annual Tall + Urban Innovation Conference, which saw prizes given out in 29 different categories. The top prize, being "Best Tall Building Worldwide," was won by the Vancouver House, located in Vancouver, British Columbia, Canada, and designed by Bjarke Ingels Group in collaboration with Architect of Record DIALOG, which also won several other prizes, Architect News reported.