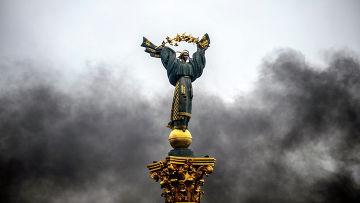 While the world has been focused on the crisis in the Crimea, the new politics of post-Maidan Ukraine have been taking shape in Kiev. Nearly a decade after the 2004 Orange Revolution, Ukraine has a second chance at abandoning post-Soviet oligarchy. But there is also a serious risk that newly prominent far-right nationalist groups might emerge with permanent influence, undermining Ukraine’s prospects of developing a more democratic and socially equal society.

Some observers have warned that focusing on the far right now, in the immediate wake of Russia’s annexation of Crimea and amid an ongoing—and relentless—anti-Ukrainian propaganda campaign, is tantamount to failing to support the new Kiev government as it moves away from Moscow and toward the European Union. These arguments need not signal any principal sympathy for the far right; in fact, they often feature a promise to take on the nationalist threat, but later.

According to this pragmatic position, the present dangers of a repressive regime and outside aggression must take priority over the comparatively less-urgent issue of the far right’s rhetoric and intentions. Yet, in reality, this sequencing of threats and responses implies at least a temporary circling of the wagons—or, worse, a deliberate decision to grant the far right, which after all played its own part in helping oust the pro-Russian kleptocrat Viktor Yanukovych from the presidency, exemption from public criticism.

While well-intentioned, this position is flawed on several counts. First, if the far right must be spared until Vladimir Putin stops his current campaign against Ukraine, then the Russian president can indefinitely prevent us from engaging with the dangers it poses, and thereby from helping determine what direction democracy will take in Ukraine. In truth, the underlying either/or logic is false: In fact, what Ukrainian democracy needs right now is support not only against Putin, but also against its own far right. There is no good reason to believe that we can cope with only one risk at a time. In fact, Ukraine simply has to deal with both of these threats simultaneously; the country does not have the luxury of time. The far right is building influence and symbolical capital at this very moment, cleverly exploiting both the successful Maidan revolution and Russia’s threat to its sovereignty.

Against this background, facing up to the history and legacies of Ukrainian ethnic nationalism is essential to resisting the ideological pull of either/or. Because this Ukrainian far right has chosen a self-understanding and symbolism that stresses its debts to the authoritarian World War II-era ethnic nationalism of Stepan Bandera and the Organization of Ukrainian Nationalists, history becomes especially urgent.

We have been told, in recent weeks—including in Tablet’s own pages—that Ukraine’s Jews were targets for Bandera and the OUN because they were seen as Soviet partisans and therefore as sympathetic to the primary enemy of Ukrainian nationalists. The alleged enthusiasm for Soviet rule on the part of Ukrainian Jews seems to be offered as sufficient explanation for Ukrainian nationalist violence against Jews after the Nazis attacked in 1941. Yet we actually know the following: While there was a perception of a special relationship between Jews and Soviets, many Jews did not rejoice at the prospect of Soviet domination. And many more went on to suffer from Soviet attacks on Jewish religion, community life, and identity, as well as deportations and other forms of repression. It was simply a stereotype and not a reality that only Jews, or Jews as such—or in general—benefited from Soviet invasion. This stereotype was fed not by the actual experience of Soviet occupation but by its filtering through the pre-existing paradigm of “Judeo-Bolshevism,” i.e., the prejudice of a special relationship between Soviet Communism and Jews.

In this view, Ukrainian ethnic nationalism is seen as really just a “national liberation movement,” which somehow, tragically, ended up colliding with the Jews. Under this erroneous perspective, wartime circumstances and exogenous forces explain everything. Yet we know—again, as a fact, not a matter of interpretation—that Ukrainian nationalism had its own developed form of anti-Semitism, which clearly predated World War II. While it was different from Nazi anti-Semitism, it was not merely opportunistic or coincidental.

This “endogenous” anti-Semitism stemmed from a radicalization going back to the 1930s. By the mid-1930s, the OUN had developed its own elaborate anti-Semitism, associating Jews with Bolshevism, as stooges of “Moscow” in a classical “Judeo-Bolshevik” manner. Moreover, this anti-Semitism was also racialized. Leading nationalists presented Jews as “parasitical,” “corrupting,” and alien intruders in a Ukrainian national body. There were discussions as to the most effective methods for “removing” the Jews from Ukraine. These methods included massive violence—again, well before the war. In 1938, a leading OUN ideologue contemplated isolation and starvation.

While the war brought unprecedented opportunities and radicalization, it makes no sense to omit the OUN’s own prewar dispositions. The overlaps with Nazi ideology clearly mattered: If they had been more different, wartime radicalization among Ukrainians against the Jews would have been neither so easy nor so rapid. By 1941, there were already nationalist calls for the destruction of Ukrainian Jewry. Leaflets from the summer of that year were clear and brutal: “People! Know! Moscow, Magyars, Jewry—they are all Your enemies. Destroy them.” Nationalists played important roles in a wave of pogroms in 1941 that claimed the life of tens of thousands of Jews.

At the same time, nationalist hopes for the establishment of a Nazi satellite state in Ukraine and close collaboration with Germany were dashed because the German leadership rejected this policy. Yet nationalist mass violence and anti-Semitism persisted: In 1943-44, Ukrainian nationalists carried out a coordinated and deliberate ethnic cleansing and mass murder campaign against Poles. In fact, many of those Ukrainians who took part in attacks on Poles in 1943 had previously served as auxiliaries of the Germans, participating in mass killings of Jews. Calls to defend Ukraine against “Judeo-Bolshevism” also continued. Internal nationalist directives, which sometimes stated that Jews were not the main “problem,” were clear about their assumption that this was due only to the fact that most of them were already dead.

The claim that the OUN should be understood as a “typical” national liberation movement, along the lines of the IRA and the Stern Gang, is misleading in another respect: Ideologically, and explicitly, the OUN sought an ethnically homogenous “führerstaat,” a greater Ukraine under its own totalitarian control. Its leadership endorsed a biologized ethnic nationalism and not only sought but carried out mass murder of those deemed alien to the national organism. Until 1934, its political terrorists were trained by the Ustasha in Mussolini’s Italy; in 1940, they were schooled by the Gestapo in occupied Poland.

For a sensible historical comparison, the closest “relatives” of the OUN were not the Irish IRA or the Algerian FLN, but rather Croatia’s Ustasha and other European interwar and wartime proto-Fascist and Fascist movements. These movements and Ukrainian nationalism actually shared a Central and Eastern European geographical and political context as well as the same period of history. Comparative perspectives can be useful. But “rebranding” Ukrainian World War II nationalism by removing it from its actual historical environment and labeling it as a national liberation movement akin to cases in the British Empire or the postwar “Third World” is a false analogy that does more to obfuscate than to clarify understanding.

We have no sympathies whatsoever for the former Yanukovych regime or Putin’s attack on Ukraine. We support the democratic aims of the Ukrainian revolution, though not the nationalist tenets of its far-right fellow travelers. We believe that the majority of Ukrainians who opposed Yanukovych’s criminal kleptocracy want to establish a liberal democracy in their country, so we see no reason to be less precise and critical about the very real legacies of Ukrainian ethnic nationalism.

For the moment, the far right represents a minority, albeit one with real influence; its presence is being exploited by Putin to misrepresent events in Ukraine as a fascist takeover, which is propagandistic nonsense. At the same time, Ukraine’s democratic political future also requires an honest and open account of the legacy of Ukrainian ethnic nationalism and resistance to any attempts to glorify ethnic nationalism or obfuscate its very real legacy of authoritarianism and ethnic violence.