Summit for Democracy will take place in December 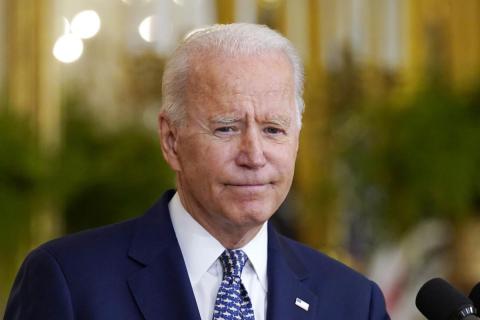 President Biden will convene dozens of elected world leaders in December for a virtual summit that celebrates democracy and explores ways that like-minded nations can link arms against authoritarianism, fulfilling a campaign promise clouded by the coronavirus pandemic and the legacy of former president Donald Trump.

The Summit for Democracy will “galvanize commitments and initiatives across three principal themes: defending against authoritarianism, fighting corruption, and promoting respect for human rights,” a White House statement said Tuesday.

The official, who spoke on the condition of anonymity to describe the event ahead of the announcement, said the list of invitees is not final and will depend in part on which nations appear receptive. The person would not confirm whether particular leaders were likely to receive invitations but said the goal was to convene a mix of established democracies and “emerging” ones.

“We’re not trying to define who’s a democracy and who isn’t,” the official said. “What we are really looking for as we engage in this outreach is some kind of will and ability to deliver on meaningful commitments to reinforce democracy and rights.”

Biden had promised such an event early in his presidency as an answer to Trump and what he and other Democrats see as his predecessor’s undermining of democratic values and American leadership. Biden’s 2019 campaign pledge could not foresee the pandemic and its effects, nor did it envision the full measure of Trump’s effort to sow doubt about the legitimacy of the 2020 election.

The two-day gathering of world leaders, human rights groups and others will take place just short of the first anniversary of the Jan. 6 attack on the U.S. Capitol by a pro-Trump mob. That insurrection sought to overturn Biden’s election victory and install Trump for a second term, and Trump continues to insist, baselessly, that Biden’s victory was fraudulent.

Autocrats, including Russian President Vladimir Putin, have pointed to the Jan. 6 attack to undermine Biden’s claim to moral high ground — but in a twist, they cite the arrests of the rioters as evidence that the United States punishes political dissenters.

It is doubtful that Putin will be invited to the summit, although he claims democratic legitimacy. It is not clear whether Biden will include other leaders with tarnished democratic credentials, such as Turkish President Recep Tayyip Erdogan or Hungary’s Viktor Orban.

In many cases, such leaders retain the pretense of democratic elections, but the vote is manipulated, the courts and the media are controlled, and political opponents are targeted.

The European Union is taking action against Hungary for an anti-LGBT law.

Whatever the summit’s guest list, the event is likely to be framed in large part as an attempt to unify democratic governments in opposition to China and its efforts to spread its economic, political and military influence.

Biden focused much of his first foreign trip as president on a push to confront China. Meeting with the leaders of Group of Seven democracies and with members of the European Union and NATO in June, Biden sought to rally those alliances to take on China’s behavior.

China is also mentioned specifically in Biden’s original campaign document pledging to hold the summit, in particular Beijing’s efforts to restrict free speech through control of technology and social media.

“Technology companies — which benefit from the fruits of democracy — should make concrete pledges for how they can ensure their algorithms and platforms are not empowering the surveillance state, facilitating repression in China and elsewhere,” Biden urged on his campaign website.

Representatives of the private sector will be included in the summit, the White House said.

The event was initially envisioned as a marquee gathering, probably in Washington, where democratically elected leaders would symbolically stand together in defense of free elections, free speech and other shared values. Biden has often described his view of foreign affairs as a battle for the future between the world’s true democracies and authoritarian regimes.

Even as the pandemic raged in the early months of Biden’s presidency, the administration hoped to hold the summit in person sometime in 2021. But with the delta variant now fueling a new infection surge in the United States, and a slow pace of vaccination persisting around the world, the summit has been turned into a virtual event this year, with a plan to invite leaders in person for a second gathering in 2022.

“Both summits will bring together heads of state, civil society, philanthropy, and the private sector,” the White House announcement said, to “speak honestly about the challenges facing democracy so as to collectively strengthen the foundation for democratic renewal.”

On his European trip, which was capped by a summit with Putin, Biden said he wanted to prove that democracies can deliver better results for their people than autocracies, despite the sometimes slow and messy process of reaching compromise.

The president pointed to the success of massive public-private efforts to develop coronavirus vaccines as one example. He touted American largesse in distributing vaccine doses to other nations, although China and Russia had beaten the United States to it.

Biden’s mixed record in contending with the pandemic itself arguably stands as a marker of democratic imperfection. Although he presided over a complex, largely successful rollout of effective vaccines, a persistent minority of Americans has adamantly refused to take any of the vaccines, while others have opted out for now.

Biden is unable to mandate universal compliance with public health rules as some other nations have done, and the pandemic response in the United States has become politicized largely along party lines.

“When authoritarian regimes point out our imperfections, I think that misses the point, because we’re not claiming perfection,” the official said. “The summit is not about perfection. What we’re saying is, we don’t shrink from scrutiny. We are always trying to use our system to improve ourselves, and because of that, I think it gives democracy a kind of powerful resilience that other systems don’t have.”