Summit on Combating Anti-Semitism at the DOJ US 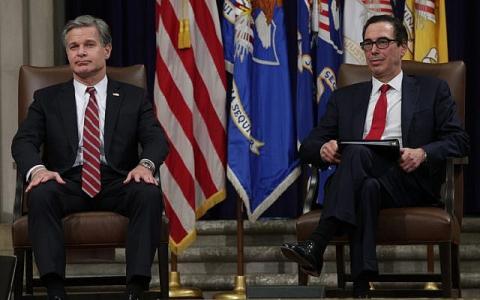 US Attorney General William Barr called anti-Semitism a “cancer” at a Department of Justice summit on the topic notable for its focus on anti-Israel activity and for speeches by the top leaders of the departments of Education and the Treasury and the FBI.

Monday’s Summit on Combating Anti-Semitism, held at the DOJ headquarters here, featured panel discussions and an audience of about 150, mostly men representing various Jewish organizations and government agencies that deal with some aspect of hate crimes and civil rights.

The conference was bracketed by speeches by Barr and three other top officials of the Trump administration: Secretary of Education Betsy DeVos, Secretary of the Treasury Steve Mnuchin and FBI Director Christopher Wray.

Elan Carr, the State Department’s Special Envoy for Monitoring and Combating anti-Semitism, said the lineup was a sign of how seriously the administration is taking what he called a “time of striking growth in anti-Semitism around the globe.” He said that growth extends from Europe to the United States, “where vandalism in New York and other cities, according to the Anti-Defamation League, occurs on a fairly regular basis, and campuses have become hostile places for Jewish and pro-Israel students.”

Anti-Israel activity — at colleges and by the Boycott, Divestment and Sanctions movement targeting Israel — was perhaps the major theme of the summit, with two of the four panels largely devoted to aspects of the topic: “Anti-Semitism on Campus” and “Combating Anti-Semitism While Respecting the First Amendment.”

Carr noted at least three sources of present-day anti-Semitism: the “white supremacist far right,” the “anti-Zionist far left” and “radical Islam.” But he drew particular attention to what he called “the new anti-Semitism,” which he said “attempts to disguise its Jew hatred as hatred for the state of Israel and the anti-Zionist endeavor.”

DeVos said that “BDS stands for anti-Semitism.” She described her department’s investigations into incidents of alleged discrimination aimed at pro-Israel students at Williams College in Massachusetts and at a pro-Palestinian event sponsored by departments at Duke University and University of North Carolina.

She also invoked US President Donald Trump’s decision to move the American Embassy in Israel from Tel Aviv to Jerusalem, as did Mnuchin, as a sign of US support for Israel. In his remarks, Barr referred to the wide landscape of anti-Semitism, including a rise in reported hate crimes, the deadly shootings at synagogues in Pittsburgh and southern California, conspiracy theories and cemetery vandalism.

Describing anti-Semitism as a “cancer,” he said he wants to “assure the Jewish community that the Department of Justice and the entire federal government stands with you and will not tolerate these attacks.”

The conference, scheduled for weeks, was held following a news cycle dominated by accusations that Trump had himself courted bigotry, first in hosting a meeting at the White House for right-wing social media figures and then saying in a tweet that four Democratic members of Congress, all women of color, should “go back” to their countries of origin.

Josh Rogin, a columnist for the Washington Post who moderated a panel on “Prosecuting Hate Crimes,” referred to this tumult in a question to the three law enforcement officials on the panel. Asked to what they attributed the rise in hate crimes, and if they considered Trump’s often polarizing behavior as one of the causes, all three — representing the Attorney General’s civil rights division, the FBI’s criminal investigation division and the US Attorney for the District of Columbia — declined to offer any reasons.

All three focused their answers instead on their efforts to prosecute purveyors of hate crimes and their work with local communities on prevention.