A stunning map of depression rates around the world

The Middle East and North Africa suffer the world’s highest depression rates, according to a new study by researchers at Australia’s University of Queensland -- and it’s costing people in the region years off their lives.

The study, published this week in the journal PLOS Medicine, used data on the prevalence, incidence and duration of depression to determine the social and public health burden of the disorder around the world. Globally, they found, depression is the second-leading cause of disability, with slightly more than 4 percent of the world's population diagnosed with it. The map at the top of this page shows how much of the population in each country has received a diagnosis of clinical depression.

Of course, researchers didn't go out and test everyone for clinical depression; rather, they used preexisting data. That means we're not looking at rates of clinical depression, exactly, so much as the rate at which people are diagnosed with clinical depression. People who live in countries with greater awareness of and easier access to mental health services, then, are naturally going to be diagnosed at a higher rate. That may help explain the unusually low rate in Iraq, for example, where public health services are poor. Taboos against mental health disorders may also drive down diagnosis rates, for example in East Asia, artificially lowering the study's measure of clinical depression's prevalence in that region. The paper further cautions that reliable depression surveys don’t even exist for some low-income countries -- a common issue with global studies -- forcing the researchers to come up with their own estimates based on statistical regression models.

Still, the researchers’ findings have real ramifications for the world -- and are often surprising. More than 5 percent of the population suffers from depression in the Middle East, North Africa, sub-Saharan Africa, Eastern Europe and the Caribbean. Meanwhile, depression is reportedly lowest in East Asia, followed by Australia/New Zealand and Southeast Asia. This chart shows how each region of the world is affected by depression; the orange line indicates the number of years spent living with clinical depression per every 100,000 people. 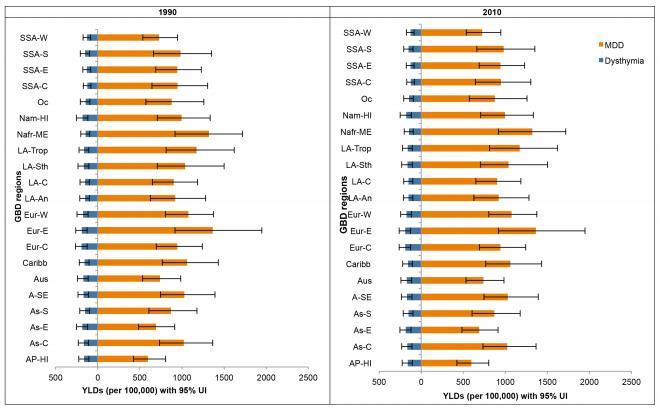 The most depressed country is Afghanistan, where more than one in five people suffer from the disorder. The least depressed is Japan, with a diagnosed rate of less than 2.5 percent.

The researchers also quantified the national “burden” of depression using a metric called DALY -- disability-adjusted life years, or the number of healthy years a person loses because of depression or a depression-related premature death. Predictably, depression burdens for the most part follow depression rates. The burden is highest in Afghanistan and in Middle Eastern and North African countries, as well as in Eritrea, Rwanda, Botswana, Gabon, Croatia, the Netherlands (!) and Honduras. It’s lowest in Asia’s most prosperous economies, including Japan.

See some patterns here? The researchers did, too. While they can’t conclusively explain why depression is so much more prevalent and damaging in some countries than in others, they have a few theories. Those include conflict, which pushes depression rates up, and the presence of other serious epidemics, which makes depression less of a social burden relative to other public health issues. Notably, Afghanistan, Honduras and the Palestinian territories are the three most-depressed areas researchers looked at.

“In the case of North Africa/Middle East, conflict in the region increased the prevalence of [depression], leading to a higher burden ranking,” they write. In sub-Saharan Africa, on the other hand, diseases such as malaria and AIDS have crowded out depression as a top public health risk. It’s still a very big deal, in other words, but HIV is responsible for far more lost-healthy-years than depression.

Social scientists and public health advocates have identified other “macro” or “environmental” causes for depression, as well. A 2010 paper by the Inter-American Development Bank found, for instance, that unemployment, low incomes and high income inequality correlate with high depression rates. They also found a link between depression and age: People between 16 and 65 tend to suffer depression at much higher rates.
That age factor, along with massive population growth, actually explains the fact that the burden of depression has grown by nearly a third since 1990, researchers say. And since both aging and population growth are likely to continue, that makes low-cost depression interventions even more of a priority for both global organizations and national governments. Unfortunately, between the costs of such programs and taboos against admitting mental health disorders, that type of action seems many years away. 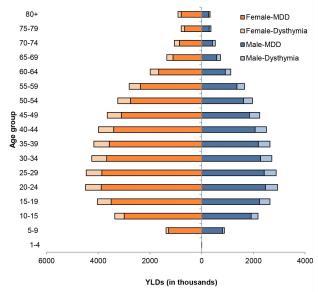