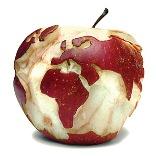 Wealthy countries, and private companies from those countries, have been increasingly buying up land in poor areas for their own economic purposes, a new study says. And Israel turns out to be one of the leading land grabbers. The study, conducted by Italian and American researchers and published in the journal of the U.S. National Academy of Sciences, warns that such land grabbing could cause environmental and economic damage to poorer countries.
The purchased land is generally used to grow crops for either food or biofuel. But the sales usually occur without the local population being consulted, and with no thought to the environmental or economic implications for the host country. Altogether, the study said, more than 400 million dunams of land have been bought in this way - more than 10 times the entire territory of Israel. A large portion of this land was bought in the last four years.

The researchers note that crops planted on purchased land sometimes come at the expense of forests or other ecologically important zones. These crops also result in more water being used by rich countries, at the expense of the host country's ability to grow food for its own people. According to the study, 60 percent of the water used for such crops serves the United States, United Arab Emirates, India, Britain, Egypt, China and Israel.

In some cases, the study says, countries buy agricultural land and water sources because their own supply is limited. Examples of this include the UAE and Israel. In contrast, a large country such as China simply finds it more cost-efficient to grow food in Africa than to ship food within China itself.

International organizations, including the World Food Programme, have been trying to formulate new rules under which poor countries would also derive benefits from these land purchases, such as jobs as technological benefits. The WFP published voluntary guidelines on the matter about six months ago. But for now, the study says, such land grabbing is merely a new form of colonialism.