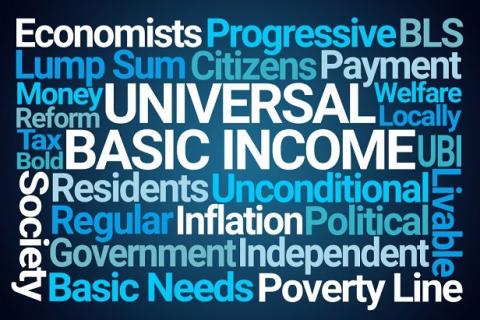 Two years ago, the city of Stockton, California, did something remarkable: It brought back welfare. Using donated funds, the industrial city on the edge of the Bay Area tech economy launched a small demonstration program, sending payments of $500 a month to 125 randomly selected individuals living in neighborhoods with average incomes lower than the city median of $46,000 a year.

The recipients were allowed to spend the money however they saw fit, and they were not obligated to complete any drug tests, interviews, means or asset tests, or work requirements. They just got the money, no strings attached.

These kinds of cash transfers are a common, highly effective method of poverty alleviation used all over the world, in low-income and high-income countries, in rural areas and cities, and particularly for households with children. But not in the United States. The U.S. spends less of its GDP on what are known as “family benefits” than any other country in the Organization for Economic Cooperation and Development, save Turkey. The Temporary Assistance for Needy Families (TANF) program spends less than one-fifth of its budget on direct cash aid, and its funding has been stuck at the same dollar amount since 1996—when the Clinton administration teamed up with congressional Republicans to turn it into a compulsory-work program. Those changes sliced into the safety net, allowing millions of people to fall through.

Most adults without children have no program to help them keep gas in the car and a roof over their head, no matter how poor they are. Most families with kids don’t have one either. In the United States, poverty is used as a cudgel to get people to work. We got rid of welfare for poor families’ and poor individuals’ own good, the argument goes. Give people money, and they stop working. They become dependent on welfare. They never sort out the problems in their life. The best route out of poverty is a hand up, not a handout.

The researchers Stacia Martin-West of the University of Tennessee and Amy Castro Baker of the University of Pennsylvania collected and analyzed data from individuals who received $500 a month and from individuals who did not. Some of their findings are obvious. The cash transfer reduced income volatility, for one: Households getting the cash saw their month-to-month earnings fluctuate 46 percent, versus the control group’s 68 percent. The families receiving the $500 a month tended to spend the money on essentials, including food, home goods, utilities, and gas. (Less than 1 percent went to cigarettes and alcohol.) The cash also doubled the households’ capacity to pay unexpected bills, and allowed recipient families to pay down their debts. Individuals getting the cash were also better able to help their families and friends, providing financial stability to the broader community.

“It let me pay off some credit cards that I had been living off of, because my household income wasn’t large enough,” one recipient named Laura Kidd-Plummer told me. “It helped me to be able to take care of my groceries without having to run to the food bank three times a month. That was very helpful.” During the study, Laura also experienced a spell of homelessness when the apartment building she was living in had a fire. The Stockton cash helped her secure a new apartment, ensuring that she could afford movers and a security deposit.

The researchers also found that the guaranteed income did not dissuade participants from working—adding to a large body of evidence showing that cash benefits do not dramatically shrink the labor force and in some cases help people work by giving them the stability they need to find and take a new job. In the Stockton study, the share of participants with a full-time job rose 12 percentage points, versus five percentage points in the control group. In an interview, Martin-West and Castro Baker suggested that the money created capacity for goal setting, risk taking, and personal investment.

“The big change was how it helped me see myself,” Tomas Vargas, another recipient, told me. “It was dead positive: I am an entrepreneur, I think of business ideas, I make business choices, I want to be financially stable.” When the program started, he worked in logistics. Now, in addition to nurturing his side projects, he is a case manager for individuals on parole.

He noted that receiving the money had made him more civically and politically engaged, if also more infuriated at the country’s scorn toward low-income households. “It’s like it’s a big game,” he said. “These people are living with a silver spoon, talking—but how about you walk this life? Have you ever even seen it?”

Finally, the cash recipients were healthier, happier, and less anxious than their counterparts in the control group. “Cash is a better way to cure some forms of depression and anxiety than Prozac,” says Michael Tubbs, a former mayor of Stockton, who spearheaded the project. “So many of the illnesses we see in our community are a result of toxic stress and elevated cortisol levels and anxiety, directly attributed to income volatility and not having enough to cover your basic necessities. That’s true in the public-health crisis we’re in now.”

And it just might. America’s welfare politics have shifted radically of late, in part because of the economic pressures felt by Millennials, the first generation in recent U.S. history likely to end up poorer than their parents. Two once-in-a-lifetime recessions, persistent wage stagnation, wild wealth and income inequality, the student-debt crisis, housing shortages, and a broader cost-of-living crisis have made redistributive policies much more palatable to them—and they’re now the country’s largest voting bloc. The pandemic has shifted U.S. welfare politics too, emphasizing the need for child-care benefits and demonstrating the power of cash as stimulus.

Right now, Democrats are pushing to send low- and middle-income parents $300 a month for each child younger than 6 and $250 a month for children ages 6 to 18 as part of President Joe Biden’s $1.9 trillion coronavirus-relief package. The program would be temporary, but there is wide support for making it a permanent entitlement. Senator Mitt Romney, a Utah Republican, has put forward a proposal to eliminate TANF and replace it with a straightforward child allowance. A number of state, local, and nonprofit efforts are getting going too.

The Stockton demonstration project is ending. But a group Tubbs founded, called Mayors for a Guaranteed Income, is extending the initiative nationwide, with cities from Compton to Gary to Newark making plans to send low-income residents cash.

These policies are being described as child allowances, guaranteed incomes, and universal basic incomes—not as welfare—thus dropping some of the racist freight attached to TANF. But they are, in fact, a kind of welfare. Both as a policy and a concept, it is what so many Americans need.