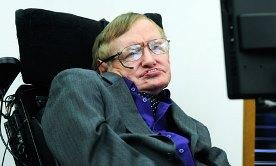 Physicist pulls out of conference hosted by president Shimon Peres in protest at treatment of Palestinians.

Professor Stephen Hawking is backing the academic boycott of Israel by pulling out of a conference hosted by Israeli president Shimon Peres in Jerusalem as a protest at Israel's treatment of Palestinians. Hawking, 71, the world-renowned theoretical physicist and former Lucasian Professor of Mathematics at the University of Cambridge, had accepted an invitation to headline the fifth annual president's conference, Facing Tomorrow, in June, which features major international personalities, attracts thousands of participants and this year will celebrate Peres's 90th birthday.

Hawking is in very poor health, but last week he wrote a brief letter to the Israeli president to say he had changed his mind. He has not announced his decision publicly, but a statement published by the British Committee for the Universities of Palestine with Hawking's approval described it as "his independent decision to respect the boycott, based upon his knowledge of Palestine, and on the unanimous advice of his own academic contacts there".

Hawking's decision marks another victory in the campaign for boycott, divestment and sanctions targeting Israeli academic institutions. In April the Teachers' Union of Ireland became the first lecturers' association in Europe to call for an academic boycott of Israel, and in the United States members of the Association for Asian American Studies voted to support a boycott, the first national academic group to do so.

In the four weeks since Hawking's participation in the Jerusalem event was announced, he has been bombarded with messages from Britain and abroad as part of an intense campaign by boycott supporters trying to persuade him to change his mind. In the end, Hawking told friends, he decided to follow the advice of Palestinian colleagues who unanimously agreed that he should not attend.

Hawking's decision met with abusive responses on Facebook, with many commentators focusing on his physical condition, and some accusing him of antisemitism. By participating in the boycott, Hawking joins a small but growing list of British personalities who have turned down invitations to visit Israel, including Elvis Costello, Roger Waters, Brian Eno, Annie Lennox and Mike Leigh.

However, many artists, writers and academics have defied and even denounced the boycott, calling it ineffective and selective. Ian McEwan, who was awarded the Jerusalem Prize in 2011, responded to critics by saying: "If I only went to countries that I approve of, I probably would never get out of bed … It's not great if everyone stops talking."

Noam Chomsky, a prominent supporter of the Palestinian cause, has said that he supports the "boycott and divestment of firms that are carrying out operations in the occupied territories" but that a general boycott of Israel is "a gift to Israeli hardliners and their American supporters".

Since then, his attitude to Israel appears to have hardened. In 2009, Hawking denounced Israel's three-week attack on Gaza, telling Riz Khan on Al-Jazeera that Israel's response to rocket fire from Gaza was "plain out of proportion … The situation is like that of South Africa before 1990 and cannot continue."

Israel Maimon, chairman of the presidential conference said: "This decision is outrageous and wrong. "The use of an academic boycott against Israel is outrageous and improper, particularly for those to whom the spirit of liberty is the basis of the human and academic mission. Israel is a democracy in which everyone can express their opinion, whatever it may be. A boycott decision is incompatible with open democratic discourse."

In 2011, the Israeli parliament passed a law making a boycott call by an individual or organisation a civil offence which can result in compensation liable to be paid regardless of actual damage caused. It defined a boycott as "deliberately avoiding economic, cultural or academic ties with another person or another factor only because of his ties with the State of Israel, one of its institutions or an area under its control, in such a way that may cause economic, cultural or academic damage".

• This article was amended on 8 May 2013. The original described Hawking as Lucasian Professor of Mathematics at the University of Cambridge. He stepped down in 2009.