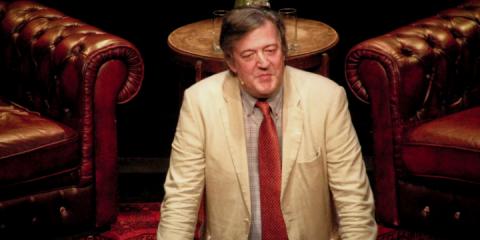 Famed British actor, writer and comedian Stephen Fry addressed the alarming and sad reality of antisemitism against Jews worldwide in a book review that was publicized on social media last week. Fry wrote that as a Jew, or self-described “half-Jew,” “a truth that most of us are too ashamed, or embarrassed, or afraid to name” is that “the world is increasingly full of antisemitic words and actions and — while much is sly, implicit and perhaps unconscious — this hurts and frightens us.”

Fry wrote the comments in his review of the new book “Jews Don’t Count” by comedian and writer David Baddiel. The review was sent to Baddiel’s publishers, HarperCollins, and the author subsequently shared Fry’s review on his Twitter page on Feb. 12. Fry gave permission to use any part of his review as quotes for the book “but I thought it was too damn well-written to fragment,” said Baddiel.

In his book, Baddiel uses his “unique combination of close reasoning, polemic, personal experience and jokes” to argue “that those who think of themselves as on the right side of history have often ignored the history of antisemitism,” according to the book’s description on the HarperCollins website. “He outlines why and how, in a time of intensely heightened awareness of minorities, Jews don’t count as a real minority: and why they should.”

Further in his review of the book, Fry said, “Perhaps too rueful and wise to be called straight hostile polemic, there is as much sorrow here as anger,” and that the “main conclusion drawn [by the book] — that anti-Jewish sentiment, language and behavior somehow aren’t in the mainstream considered as much of a scandal, affront or abuse as all other kinds of racism and minority prejudice — seems to me impossible to refute.”

In 2019, Fry defended Rachel Riley, a British television star who has criticized the UK’s Labour party multiple times in the past over claims of antisemitism within the party. He also previously asserted that he strongly identifies as being Jewish despite not being religious.