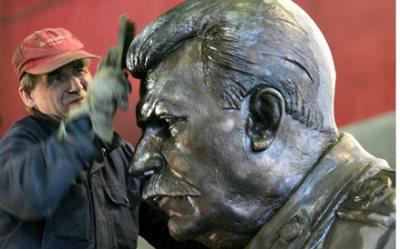 When Joseph Stalin died sixty years ago, Soviet citizens sensed that their lives had changed forever -- and they were right. During his nearly 30 year rule, Stalin transformed the USSR from the ground up and led it to victory in World War II. He also killed, imprisoned, or displaced tens of millions of his own compatriots; the full extent of his crimes will probably never be fully known. His successors ruled on an altogether more modest scale.

In October 2012, the Carnegie Endowment for International Peace commissioned a survey of perceptions of Stalin in Russia and three South Caucasus states: Armenia, Azerbaijan and Georgia. The results show with startling clarity that, for many, the Soviet tyrant lives on. Of the four post-communist states surveyed, only Azerbaijan (which seems to be more interested these days in emulating Dubai than dwelling on its Soviet past) appears to have set Stalin on a path toward irrelevance: 22 percent said they had no idea who he was. (Among the young this number reached almost forty percent.) In Georgia, by contrast, a shocking 45 percent of the respondents shared a positive view of Stalin -- presumably because he remains, as the most famous (and infamous) ethnic Georgian, a powerful nationalist symbol. In Armenia this number was 25 percent, in Azerbaijan it was 21.

Yet Russia is the place where, in many ways, the legacy of Stalinism runs deepest. In the Carnegie survey, conducted Moscow's respected Levada Center, 42 percent of Russians named Stalin the public figure that has had the most influence on world history -- up from just 12 percent back in 1989, at the peak of Gorbachev's liberalization push. Meanwhile, the number of those who express a positive opinion of Stalin in the Carnegie survey reached 28 percent. To quote the Levada Center's Gudkov, these figures represent "an astonishing resurgence of Stalin's popularity in Russia" since the end of the USSR.

There is, however, something curious about this recognition: Traveling around Russia, one would never guess the Russian people believe Stalin is their greatest compatriot. Stalin statues or portraits are nowhere to be found, and there are no streets or cities named after him. For comparison the embalmed body of Lenin, Stalin's Bolshevik predecessor, is still on display in the mausoleum in Red Square. Lenin's name and monuments adorn every Russian city. Yet Lenin is slowly slipping into oblivion: During the same period of 1989 to 2012 his popularity dropped from 72 to 37 percent.

Stalin is a hidden hero, and this status is part of the inherently vague nature of Russia's post-communist statehood and national identity. Russia does not have a nationally recognized narrative of the origins of the new, post-Soviet Russian state and no consensual perception of its Communist past.

Russian Stalinist groups, Communists, war veterans and others have repeatedly come up with initiatives of paying tribute to Stalin, such as bringing back the name of Stalingrad to the Russian city (now known as Volgograd) where one of the major battles of WWII was fought. Most recently, a Duma deputy has talked about naming a street in Moscow Stalingradskaya (after the battle of Stalingrad). Neither of the two ideas has been fully implemented, but Stalinists can claim some successes in endowing their hero with physical presence. Buses adorned with Stalin's image have appeared in some Russian cities on Victory Day and other wartime anniversaries.

In Russia the official discourse on Stalin is evasive, and public perception of him is ambivalent and divisive. Almost half of Russians surveyed agree with the statement that "Stalin was a wise leader who brought power and prosperity to the Soviet Union." But over half in the same poll believe that Stalin's acts of repression constituted "a political crime that cannot be justified." And about two-thirds agree that "for all Stalin's mistakes and misdeeds, the most important thing is that under his leadership the Soviet people won the Great Patriotic War" (the name Russians give to World War II).

During the six decades since Stalin's death, the Soviet Union and then post-communist Russia have gone through two and a half phases of de-Stalinization -- but though his images are absent from the Russian physical space, Stalin's presence can be easily felt in the Russian political order and in state-society relations.

The first attempt to purge his legacy was launched in 1956 by Soviet leader Nikita Khrushchev, who exposed Stalin as the mastermind of mass repressions of innocent people. On Khrushchev's orders countless streets, factories, and cities that bore Stalin's name were renamed. Stalin's body was quietly removed from the mausoleum, but it still remained in Red Square -- right next to where Lenin rests. Khrushchev's de-Stalinization only went so far.

In 1964, Khrushchev was deposed in a bloodless coup d'état. The post-Khrushchev Soviet leadership, led by Leonid Brezhnev, quickly wrapped up his attempts to achieve a reckoning with Stalin. During the "creeping re-Stalinization" that followed, the condemnation of Stalin stopped, but he was not publicly exonerated. Instead his name was practically removed from official discourse.

A new wave of de-Stalinization was launched two decades later in the Gorbachev era. In contrast to Khrushchev's, this round of de-Stalinization engaged broad public constituencies and radically de-legitimized the Communist regime. By the end of 1991 the meltdown of Soviet Communism was followed by the collapse of the Soviet Union.

But the enthusiasm for dismantling the Soviet legacy was soon overshadowed by the hardship and turmoil of the early 90s. In the face of a collapsing economy, rising crime, growing inequality, and a tough Communist opposition, Russia's first president Boris Yeltsin did not follow through with de-Stalinization at a state level. Stalin's grave remained in Red Square (and Lenin's body stayed in his mausoleum). The one attempt to secure a legal condemnation of Soviet Communism fizzled; the 1992 trial of the Communist Party of the Soviet Union failed to reach a verdict on the crimes committed by the Soviet regime.

When Vladimir Putin emerged as Yeltsin's successor, he put an end to the political turmoil and built a regime inspired by the Soviet version of Russia's traditional model: centralized and uncontested state power drawing heavily on the domestic security forces. From Putin's Soviet-style emphasis on powerful state and powerless people stemmed a symbolic return of Stalin. It was under Stalin, after all, that Russia, in its Soviet guise, was at its most powerful.

Dmitry Medvedev, whose job was to put a softer face on Putin's Russia, embarked on a third wave of de-Stalinization. In late 2009, Medvedev posted a passionate video blog on the Kremlin's website in which he condemned "Stalin's crimes." The following year Medvedev's Council on Human Rights and Civil Society announced an ambitious program of de-Stalinization. Yet not too long after that, in an address to officers of the FSB (the successor of the KGB, the Soviet secret police), Medvedev expressed confidence that the current generation of FSB officers would "carry on the traditions of its predecessors with dignity" -- those same predecessors who carried out the mass repressions referred to in his video blog "as one of the greatest tragedies in the Russian history."

The FSB itself has never rejected its Soviet legacy. Its headquarters are still located in the Lubyanka, where so many of Stalin's victims were tortured and shot in the building's infamous basements. In the Russian informal system of patronage, the agency's political clout is unparalleled. Throughout his leadership, Putin has drawn on the FSB for many of his high-level government appointments and put members of the FSB in charge of lucrative business assets.

Medvedev's half-hearted de-Stalinization basically wound down as soon as his substitute presidency ended and Putin returned to the Kremlin. To this day there is no consistent official narrative of the Soviet past in general or Stalinism in particular. Nor is there a memorial to the victims of Stalin's rule.

While the official discourse reduces mentions of Stalin to a minimum, public discussions have merely been marginalized, not banned or suppressed. Memorial, a well-known nongovernmental organization that conducts archival research documenting Stalin's crimes, has been able to continue its commemorative work. Aleksandr Solzhenitsyn's Gulag Archipelago and other literature about Stalin's terror are easily available in bookstores and libraries. At the same time, books glorifying Stalin, with titles such as The Forbidden Truth about "Stalin's Repressions" or USSR Without Stalin: The Path to Catastrophe, are on sale in major bookstores. A conservative estimate of the total print run of the most popular titles amounts to over one hundred thousand copies.

This juxtaposition reflects controversial perception of Stalin as both a dictator to blame for the deaths of millions and a wise and powerful leader who won the war against Hitler. In the minds of many Russians, in fact, the two perceptions are not infrequently combined. In the collective post-Soviet psyche, national greatness is inseparable from violence and brutal force.

For the Russian people, their nation's greatness is best embodied by the Soviet Union's 1945 victory in the Great Patriotic War. In today's Russia, the man who led the nation to this victory, comes in handy as symbolic compensation for a nation suffering from Russia's loss of status in the period following the collapse of the Communist empire.

Stalin's ranking as the greatest Russian may be seen as an indirect reflection of a mentality that is common to many of today's Russians, who maintain passive loyalty to the nation despite the injustice, corruption, and egregious abuse of authority by state government officials. The historical experience has taught the Russian people that they are powerless against the omnipotent state and that their best strategy is to adapt to the will and whims of their rulers. About 80 percent of Russians tell pollsters that they have no "influence on political life in Russia."

The years of post-communist development have not been fully wasted, however. The past few years have witnessed the rise of what one might call "non-Soviet Russians". It was these younger Russians -- and particularly those better-educated Moscow residents with modern professional skills -- who joined the mass protests against Putin's regime that erupted in the Russian capital in late 2011. In the Carnegie survey these same younger Muscovites do not agree that "our people will always need a leader like Stalin, someone who will restore order."

Russian society is becoming more diverse, and people's relation to the state is a major line of division. The paternalistic model that Putin has established derives its legitimacy from a system of symbols that could be called "Stalinist": an infallible state, patriotism understood as loyalty to the ruling authorities, disloyalty regarded as a criminal act. These symbols may still be accepted by a conservative Soviet-style majority, but they have also become divisive.

A true de-Stalinization process will require no less than a reinvention of Russian nationhood based on a rejection of the traditional concept of the state, an end to the political and historical immunity of the secret police, and the emergence of a concept of "we, the people." It is impossible to say whether and when Russia will rise to this challenge. But until that happens, Stalin will not die.