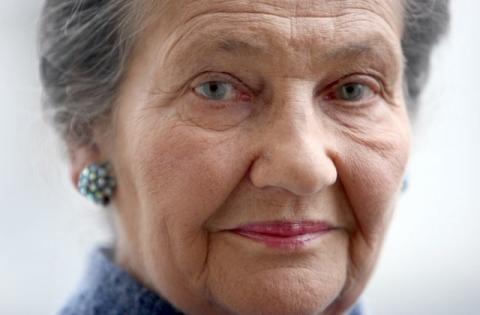 Few figures since Charles de Gaulle have enjoyed such respect and adoration in France. Simone Veil, who died last week, was of a rare breed who inspired admiration in generations of French people, regardless of their political leanings. Her dignity, strength and beauty made her a French symbol, one that will soon be resting at the Paris Panthéon alongside Victor Hugo, Marie Curie, Zola, Voltaire and Rousseau.

I will always remember seeing Simone Veil for the last time. It was late on a surprisingly balmy January afternoon in 2008. I was seated on a cafe terrace in the shadow of Notre Dame, deep in conversation, when my attention was caught by a rumbling noise far away. It was getting perceptibly louder, with a rhythm to it, austere and solemn. I had finally identified the typical rolling of military drums, when an old man appeared, walking briskly from terrace to terrace, table t

Parisians and tourists alike got up at once, stirred by the man’s powerfully simple words. I walked towards the noise and positioned myself at the pavement’s kerb looking towards the Marais, where many Jewish Parisians were rounded up during the war both by German forces and French police. And then they appeared on the horizon, walking towards us slowly, with a vanguard striking drums while others carried flags. They were French survivors from concentration camps, walking tall despite their old age, and proudly carrying French flags as old as they were.

I was stunned. These Jewish compatriots of mine had forgiven France for betraying them. And then I saw Veil, this familiar, reassuring and beautiful French woman, the conscience of a whole nation. The cortege walked past, on its way to the Memorial of the Martyrs of Deportation sitting at the tip of the Île de la Cité, beyond Notre Dame’s gardens. Parisians stood still, some of them bowing their heads. The heart of Paris had fallen eerily silent. Even the birds seemed quiet. All we could hear was the drum rolls, now ebbing away. This moment will always stay with me.

Veil, a survivor of Auschwitz who lost both her parents and a brother in the hell of the camps, always spoke softly yet forcefully about the war’s darkest hours. However, she didn’t let it define her. She would study, work and be an independent woman, as her mother had urged her before dying of typhus in March 1945. Her experience in Auschwitz profoundly informed her love for the European project and its construction, with, at its heart, the reconciliation with Germany. The moment of her election as the first president of the European parliament in 1979 was intense with restrained emotion.

Parliamentarians rose from their seat, one after the other, turning towards her, applauding louder and louder. Film footage shows her smiling timidly, but her eyes say it all. A few years earlier, Veil had led the mother of all legal battles at the French parliament, defending women’s right to abortion. Another Simone – de Beauvoir – had politically prepared for it with The Second Sex, published in 1949; a study of what it is to be a woman in a man’s world, a 1,000-page book that strongly advocated the right of women to control their own bodies.

The two Simones were very different women. De Beauvoir belonged to the left, rejecting marriage and maternity, while Veil, married at 19, had three children and belonged to the centre right. However, as ardent campaigners for women’s emancipation, both were violently attacked by a male chauvinist political and intellectual class.

Veil had the peculiarity of being too revolutionary for the right and her political family and too bourgeoise for the left. Unlike de Beauvoir, Veil didn’t campaign for the legalisation of abortion out of ideology, but out of humanism. She couldn’t bear the idea that in the early 1970s, especially after the events of May 1968, French women were still forced to travel either to Switzerland or England to terminate unwanted pregnancies, or face both the distress and health risks of using an illegal abortionist.

On 26 November 1974, wearing a blue dress and a string of pearls, the 47-year-old Veil addressed the French national assembly. She was calm and determined: 200,000 French women were living the distress of clandestine abortion each year – it was time to end such suffering, she said. The debates that followed lasted for 72 hours. Veil suffered despicable insults, especially from her political family. But supported by the president, Giscard d’Estaing, and the prime minister, Jacques Chirac, she won the vote at 3.40am on 29 November.

Veil’s immense popularity lies in that we saw in her the incarnation of the French republic, one and indivisible. Also, for her, the republic, secularism and feminism went hand in hand, inseparable. When, in 2008, Nicolas Sarkozy, whom she personally liked, began his now infamous debate on “national identity”, she voiced her profound dislike for the idea, as always, calmly yet powerfully.

During a national homage at the Paris Invalides, in the shadow of Napoléon’s tomb, president Macron addressed Simone Veil: “You have, Madam, made our old nation, better and more beautiful. Your grandeur is ours. As you are leaving us, will you please, Madame, accept the French people’s deepest gratitude.” We were all hoping for what followed. And so Macron ended his eulogy: “I have decided, in agreement with her family, that Simone Veil would rest at the Panthéon, alongside her husband.” The crowd erupted in applause. President Macron had read the mood of the nation. We wanted nothing less for her than the highest accolade of the French Republic. For she was the best of France.