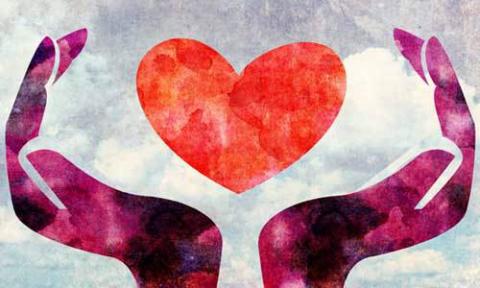 The Jewish Museum Vienna has launched a daring new exhibit focused on love and sexuality in Judaism titled, Love Me Kosher: Love and Sexuality in Judaism. The exhibit shows how love and sexuality are regarded in the Torah and the Talmud,and explains Jewish wedding rituals. The exhibit also highlights Vienna as the center of sexology in the 1900s; “Dr. Ruth” Westheimer; current discussions in modern Judaism on partnership; and lesbian, gay, bisexual and transgender issues.

The exhibit is bound to create controversy: one of the photos, taken by Benyamin Reich, shows two young religious Jewish men, naked, covered only in a tallit (prayer shawl). The same photographer also took a picture of a naked woman covered in a tallit.

“Queer members of the orthodox Jewish community in Vienna see themselves confronted with a widespread rejection of homosexuality.”(Jewish Museum Vienna curators)

The idea for the exhibition came to the museum’s director and curator Danielle Spera. “It was important to us to show that Judaism is generally very positive about sex, considering it as a divine gift and a sacred obligation,” said Spera.

Daniela Pscheiden, one of the curators, said, “We wanted the exhibition to be very sensuous and reflect a positive attitude toward life. In the first few days, we got wonderful positive feedback from the media and our visitors.”

Pscheiden created a display of Jewish-queer life in Vienna called One Hundred Percent Unkosher? Jewish and Queer. “Basically, male homosexual acts are forbidden in Judaism,” the exhibit explains. “In the Torah it is written: ‘Do not lie with a male as one lies with a woman; it is an abhorrence.’ (Leviticus 18:22).” There is also a discussion of female homosexuality, which is neither mentioned in the Torah nor in rabbinic literature.

“In contrast to Orthodox Judaism, Conservative and liberal communities are more open,” the curators explain. “Marriages of same-sex partners are also celebrated in the Viennese Or Chadasch community. Queer members of the Orthodox Jewish community in Vienna see themselves confronted with a widespread rejection of homosexuality.”

Sexuality and the Holocaust

One of the topics discussed in Love Me Kosher is sexuality in the Holocaust. Julia Windegger, another curator, explained why it was important for the exhibit to focus on such a sensitive subject.  “This topic of the exhibition was curated by our colleague Tom Juncker,” said Windegger. “The Shoah is part of the history of the city of Vienna and its Jewish community, so it goes without saying that we – as the Jewish Museum Vienna – also talk about the Shoah in relation to sexuality.”

Another focus of the exhibit is “Vienna as the center of modern sexology in the late nineteenth century,” which, the curators noted, “is where Sigmund Freud’s psychoanalysis was born.”

They give examples of Austrian Jews such as Leo Schidrowitz, who founded a modern institute for sexology in Vienna’s Kohlmarkt based on the model of Magnus Hirschfeld. “These ambivalences led to fruitful debates, which particularly manifested in the cultural sphere,” the curators explained.

Love Me Kosher. Love and Sexuality in Judaism will be on display from June 22 through November 13 at the Jewish Museum Vienna.