Sex is a kind of wizardry 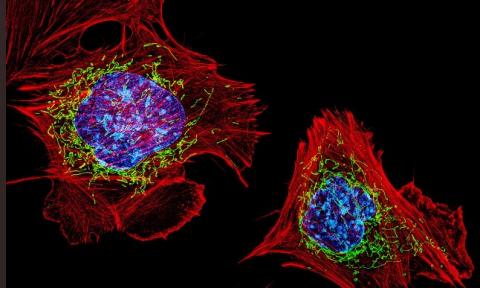 At its heart, sex is a process of genetic mixing: it creates unique sets of genes and trait combinations different from either of the two parents. In eukaryotes (organisms such as animals and plants), the molecular machinery of recombination deliberately breaks the chromosomes into chunks, only to reunite the pieces of maternal and paternal origin into novel permutations that are then passed on to the progeny: a remarkable act of molecular wizardry, perfected over billions years of evolutionary tinkering.

But it is not the molecular workings of recombination that captivates biologists the most, it’s the fact that genetic mixing in the form of sex has evolved in the first place, in spite of it being a cumbersome and costly endeavour. Evolutionary theorists agree that cloning, in many ways, is a more efficient mode of reproduction, which, in a world governed by the rules of natural selection, should readily outcompete sex. An asexual female, for example, would produce twice as many offspring as the sexual one, avoiding the burden of bearing males or searching for suitable mating partners.

Sex is unknown in bacteria – the simplest and most ancient living cells on Earth – that reproduce by simply splitting into two. Evolving considerably later, eukaryotes are built of much larger and awfully complex cells, their insides full of organelles and membranous labyrinths buzzing with sophisticated molecular machinery and cargo-transport networks. Unlike bacteria, very few eukaryotic species revert to strict asexuality, and those that do seem to be relatively short-lived on the evolutionary timescale. Sex is costly, but it also appears to be essential for the long-term survival of complex life.

Some of the most talented theorists have striven to understand why. Myriad explanations made their way into science journals and textbooks – from the earliest proposals that sex generates variation and speeds up adaptation, to mathematical models demonstrating that gene shuffling bolsters resistance to parasites and slows down the accumulation of hazardous genetic defects. But even with the overwhelming amount of attention the problem has received over the years, it is still considered unsolved.

None of the canonical hypotheses is fundamentally wrong; on the contrary, many of them are supported by substantial, and still growing, amounts of experimental evidence. But the classical explanations were developed with modern eukaryotes in mind, and can only explain the modern part of the evolutionary puzzle – why sex persists in contemporary complex organisms. They do not tell us why and how sex first arose.

This disparity should not come as a surprise, however. The classical theories were formulated when the evolutionary timing of the origin of sex was not known, and the views on the origin of the complex cell itself were fraught with misconceptions. The assumption that sex originated in an organism resembling modern eukaryotes in fact made a lot of sense; there was even a group of seemingly ancient critters – members of the so-called Archezoa, such as Giardia – one evolutionary step below the modern complex organisms, that were believed to be both eukaryotic and primitively asexual.

But the past few decades have seen a paradigm shift in the understanding of how complex life came into being. All Archezoa turned out to be secondarily simplified versions of cells as complex as any other unicellular eukaryote that lives today. Genetic composition analyses showed that genes required for sexual reproduction permeate all eukaryotic groups, from animals and plants, to unicellular amoeba and even Giardia. The last common ancestor of all eukaryotes and the first truly complex cell was already sexual – which is why the ultimate solution to the evolutionary enigma of sex should be sought within the origin of eukaryotes themselves.

The early evolution of complex life is still a long way from being fully understood, but we do have a basic idea of how it started. Around 2 billion years ago in a world ruled by microbes, a bacterial species formed a close symbiotic partnership with another simple cell – an archaeon. The interaction was so tight that bacterial symbionts eventually colonised the insides of archaea and were gradually transformed into mitochondria – the organelles of our cells specialising in energy production. The chimeric cell grew and expanded, using the genetic material of both partners and the newly available mitochondrial energy source to forge a cell of unparalleled complexity, inventing countless eukaryotic features along the way – including sex.

But Nick Lane, the author of Power, Sex, Suicide (2005) and The Vital Question (2015), thinks that sex was far more than just one of many pre-eukaryotic inventions – it was the key to survival of the emerging complex cell. The transition to eukaryotes was beset with challenges – not only because a bacterium had to survive within a foreign cell, but also because of the massive genomic revolution that was taking place: pieces of bacterial DNA were routinely migrating into the host genome, while its circular chromosomes were broken up into linear pieces, each containing only a part of the cell’s vital genetic repertoire.

Rapid changes in genome structure were critical in putting the eukaryotic cell together, but they also rendered the cell’s genetic composition unstable. Cutting the chromosomes into pieces could have easily produced lethal defects. Incorrect partitioning of the newly formed chromosomes would have killed the cell at the next cell division. Opportunities for error were lurking every step of the way, and most mistakes were punishable by death.

Lane is convinced that the pre-eukaryotic cell was rescued by its ability to fuse with similar cells – a skill that bacteria do not possess. Frequent cell unions brought several copies of the genome together, each from a different individual and each containing a different set of mutations or newly acquired symbiont genes. Cell fusions masked lethal defects and ensured that the host always possessed a full set of indispensable chromosomes and vital genes. Fusions facilitated gene mixing through recurrent recombination, stabilised the genome, and promoted its further expansion.

Quite unexpectedly, the evolutionary puzzle of sex comes down to the origin of cell fusion, not just recombination, in the early stages of the transition to complex life. Why would pre-eukaryotic cells start fusing with each other? There are several possibilities. The evolutionary biologist Neil Blackstone of Northern Illinois University developed a hypothesis in which host cell fusions are induced by bacterial symbionts, unhappy with the internal environment of their current host. My own theoretical analysis suggests that fusion evolved to promote mixing among the internalised symbiont populations, covering up the detrimental effects of faulty or selfish symbionts. Critically, both hypotheses predict that the ability to fuse was a direct consequence of the bacterial invasion into the archaeal host, putting the origin of the first sexual trait well before the development of the eukaryotic cell was complete.

Regardless of what the initial benefit of sexual cell fusion was, the repercussions were immense. Sex rescued the emerging eukaryotic cell when it was most vulnerable; without sex, the evolutionary transition would have plainly failed. While sex appears to be critical for the long-term survival of contemporary eukaryotes, it was not itself an invention of the eukaryotic cell. It is far more likely that the eukaryotic cell evolved only because sex – through cell fusion and recombination – was invented in ancestral chimeric lineages leading to the last common ancestor of all complex life.