SeeMe’s new platform is taking tech to the classroom 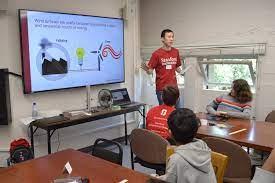 We’ve all had it tough these last two years, but one societal group in particular has had a tough time adjusting to quarantines, lockdowns, and their overall development: children enrolled in school. While everyone can cite examples of frustration during the pandemic, it is still unclear on the long-term effects that lockdowns had on young, impressionable, and formative minds.

“We all saw there is a surge in cases of violence after Covid-19 within students at schools,” explained Eyal Zafrir, CEO at Marmanet, a company that outsources project management in the public and private sectors. “It’s not only in Israel, it’s everywhere in the world… Kids got pulled out of their routine, of being at school every day from 8-2, the Zoom classes didn’t work perfectly, end of year tests didn't go as well online, and teachers could not see what was happening with their students. The kids lost the feeling of a classroom, how it used to be and how to behave."

As children adjust back to almost two years away from the classroom and their friends, Marmanet, which is part of telecommunications company Telrad Group, has partnered with an app called SeeMe to help teachers and principals at schools identify potentially violent behavior in classrooms. Using an application, teachers ask students to assign one of six available emojis to each of their classmates, and then to place them within a variety of concentric circles to rank them in closeness. Based on this web of data, teachers can then measure the relationships between students and their well-being.

SeeMe has recently completed its pilot stage in 20 Israeli schools. According to Zafrir, the plan is to translate its application from Hebrew into English and Arabic, and then to expand it across the country and the world. SeeMe is also connected to Hiverrr, an adtech company in the education arena trying to digitize schooling for children and teachers alike.

"My strategy in the company is to lead Telrad to be one of the most innovative companies in Israel, offering different services and technologies that can impact the education field,” added Moti Elmaliach, CEO of Telrad Group. “The SeeMe app, as well as the Hiverr marketplace, are just two of the many solutions we are working on in order to make Israel not only the Startup Nation but also the Education Nation."

SeeMe can be deployed into schools thanks to the partnership Marmanet has with Israel’s Ministry of Education. They recommend using it 4-5 times per year on students in grades 2-9 (aged 7-14), although the annual license allows it to be deployed unlimited times. While students are famously closed off to their teachers or parents, the application claims to identify patterns that can spot if they feel violent towards other classmates, or left out from the myriad of WhatsApp groups or TikTok events that children gather in socially outside of school hours.

“If my kid has a problem, and he won’t tell me at home, someone in school will know about it,” Zafrir continued, when asked how parents would respond to their children’s data being collected by schools. “Until today, we hoped as parents that his teachers would know about it. But from now on, I know that if the school has this app, they would know if there is a problem. That’s why I think parents will be very happy with this and like it very much.”

Currently, consent is not needed from the parents in order for schools to track the mental well-being of students, nor is the school obliged to share any of that information with the parents. The idea is that the app will help teachers and principals fill in the gaps between what happens in the classroom and outside, and then they can easily relay those emotions to parents in an appropriate setting. As kids return to school and re-enter the physical world of social interaction, it might be the tool that could help them safely communicate with classmates again.

SeeMe was developed by Dr. Eric Taib, Head of Department of Multidisciplinary Studies at Sapir College, and Livnat Aranias. Marmanet helps private and public companies outsource project management and operations to help them focus on developing their core business activity. The Telrad Group is a group of companies that specialize in solutions and services for a range of IT and telecom projects. It has 400 employees serving customers in 100 countries.