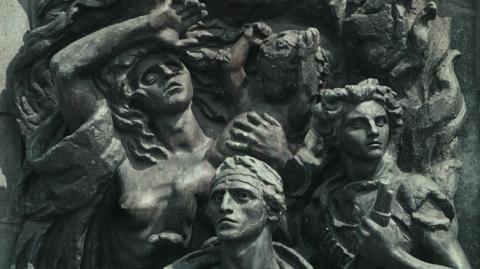 Seventy-five years ago, a few hundred young Jewish fighters ambushed German forces as they entered the Warsaw Ghetto to round up whatever Jews remained there and transport them to the Treblinka death camp. All they had at their disposal was a tiny cache of guns, grenades and Molotov cocktails, but these desperate individuals, believing they had nothing left to lose, managed to hold out against the Nazis for nearly a month.

On Thursday, the Polish government and Jewish communities around the world will mark the anniversary of the uprising, which went down in history as the most famous act of Jewish resistance during the Holocaust.

It also overshadowed a much lesser known act of resistance at the Warsaw Ghetto that had already been carried out and which is now getting its fully-deserved recognition. From the time the ghetto was created in early 1940 until January 1943, a secret society of archivists were busy keeping personal diaries and gathering testimonies and other materials related to Jewish life in the ghetto so that even if they didn’t survive the war, the world would have access to first-hand and real-time accounts from the victims.

Spearheaded by local historian Emanuel Ringelblum, their project was given the Yiddish code name Oyneg Shabes (“the joy of Shabbat”) – presumably because its members would convene on the Sabbath.

Its 60 or so members were handpicked by Ringelblum, who ultimately escaped the ghetto but did not survive the war. They represented a broad cross-section of Polish-Jewish society, including doctors and rabbis, Zionists and Bundists.

Only three of the archivists survived, but before the ghetto was razed in May 1943, several members of the Oyneg Shabes project managed to bury their treasure trove of documents and artifacts – the last batch just before the start of the uprising.

In September 1946, following an intensive search, a first cache of 10 tin boxes, which had been hidden under a school building, was found. In December 1950, a second cache of documents hidden in two aluminum milk cans was discovered by accident by Polish construction workers digging underground. A third cache has, to this day, never been found.

Since its discovery, the collection, which includes roughly 35,000 pages, has been stored and archived at the Jewish Historical Institute, the former headquarters of the main Jewish library in Warsaw and one of the few buildings in the Polish capital to survive the war.

The material has been used as evidence in Nazi war crime trials, including that of Adolf Eichmann in Jerusalem. Researchers interested in seeing the original material, stored in the basement of the Jewish Historical Institute, could gain access upon request, but until now the collection had never been displayed publicly.

“What We Were Unable to Shout Out to the World” is the name of a new permanent exhibit, opened in November at the institute, which provides the public at large with a first-of-its-kind opportunity to view the original material up close. The documents on display – written in Yiddish, Polish, German and Hebrew – are rotated every two to three months to prevent damage from excessive exposure to light.

Among the exhibit highlights is one of the two milk cans, on display behind a glass case (the second milk can is held at the United States Holocaust Memorial Museum in Washington).

The exhibit also includes several short films documenting, through archival footage, how the boxes and milk cans stored underground were eventually found, and the restoration and preservation work the documents inside underwent.

The first room of the exhibit contains a large wooden table engraved with the names of the participants in the Oyneg Shabes project. Under each name is a drawer containing a short biography of the person, including his or her contribution to the project.

Ringelblum’s drawer also includes the following quote from his diary, summarizing the ground rules of the project: “Versatility was our number one principle. The second was objectivity. We sought to tell the whole truth, however bitter it might be. Our photographs are faithful, with no retouching ... our contributors wrote the truth, for we assured everyone that – due to the fact that it concerned living people – the material wouldn’t be used nowadays but was strictly meant for historical purposes. Everyone should therefore write as if it were already after the war. They should fear neither the Germans nor the Jewish Council [the ghetto administration put in place by the Nazis].”

Among the several dozen original documents on display during a recent visit, many were in surprisingly good condition. They included an excerpt from an account by Jurek Wilner – who arrived in the ghetto in October 1941 – of the mass executions at Ponary near Vilna. “A woman came to Vilna who had survived by sheer chance,” he reported. “She had found herself crushed under a mass of dead bodies, among which were those of her husband and son, but managed to extricate herself and reach town in clothes eaten through with disinfection powder.”

The display included a page from the testimony of Jacob Krzepicki, who escaped from Treblinka, as relayed to Rachel Auerbach, one of the three archivists who survived the war. “We got off the train cars tired and exhausted,” he told her. “After so many hours in the dark freight car, sunlight was dazzling. It was five in the afternoon, but it was still scorching hot. The first thing we noticed was an immense heap of rags. Our hearts trembled with anxiety. So many rags, but where are the people?”

There was also a postcard dropped from a train on its way to Auschwitz; a page from a sermon delivered by Rabbi Kalonymus Kalman Shapira, the rabbi of the ghetto; and a handwritten tally of the number of Jews sent to Treblinka in the mass deportation carried out in the summer of 1942.

On display as well were the handwritten last wills and testaments of the Oyneg Shabbes archivists. Auerbach, who ran a soup kitchen in the ghetto and later testified in the Eichmann trial, made the following impassioned plea for revenge in hers, which is dated July 1942: “Such atrocities may have already happened in Jewish history, but there has never been such disgrace. Jews as instruments. I want to live, ready to kiss the boots of the commonest boor just to live to see the moment of VENGEANCE! VENGEANCE! VENGEANCE! Remember all you who read this: VENGEANCE!

(Auerbach is the main protagonist of “Who Will Write Our History?” – a soon-to-be-released documentary about the Warsaw Ghetto archives by filmmakers Roberta Grossman and Nancy Spielberg. It is based on a book by the same name written by Samuel Kassow, a professor of history at Trinity College in Connecticut.)

All the archivists included their last will and testament in the archive. Along with her testament, artist Gela Sekstein also buried her drawings and paintings, including a sketch of her 20-month-old daughter titled “Sleeping Girl,” which was on display. Referring to this particular work, she wrote: “I do not ask for praise, only for me and my daughter to be remembered. This talented little girl is named Margalit Lichtenstein.”

Sekstein’s husband, Israel Lichtenstein, was one of three archivists charged with burying the 10 tin boxes. In his will, 19-year-old David Graber made the following wish: “May this treasure fall into good hands. May it survive until better times. May it alarm the world to what happened in the 20th century. “Now we can die in peace. ... Our mission has been accomplished. ... Let history bear witness to that.”