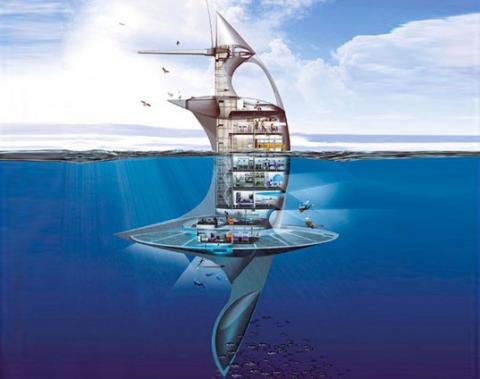 A few years ago, there were rumors that a futuristic oceanographic marine vessel would be constructed with the sole aim of exploring the world’s oceans. Known as The SeaOrbiter, it would serve as a scientific laboratory as scientists explore the places that cover two-thirds of our planet and contain 80% of all life on Earth — the oceans. Now it appears the dream is becoming a reality, as the SeaOrbiter team has announced that construction will begin by the end of the year!

The brainchild of French architect Jacques Rougerie, The SeaOrbiter would also be the world’s first vertical ship standing at an impressive 170 feet (51m) tall. However in order to make the vessel as stable as possible, two-thirds of its structure would remain underwater, giving the craft buoyancy, as well a “fish-collection system for studies of the pelagic ecosystem, plankton biodiversity, and fish stocks.”

The SeaOrbiter concept has been discussed for over 12 years and as been dismissed on countless occasions as a pipe dream, but it seems like the project has gained traction and construction is rumored to start in October with the vessel launching next year.

It is also completely sustainable with the craft’s power coming from solar, wind and wave power. Although it is designed to drift with ocean currents, EADS, the European defense and space systems conglomerate, are rumoured to be working on a biofuel to serve as an alternative power source.

“All technical issues are resolved, all the modeling is done,” says Ariel Fuchs, education and media director of the SeaOrbiter project speaking to CNN. “We gathered institutional and industrial support five or six years ago and it’s been a real institutional and financial project for the last two years.”

The $52.7 million project has its funding in place, and Rougerie is keen to promote the priceless information that can be gained from such a craft. In the past, Rougerie has said The SeaOrbiter would become an essential tool in exploring the world’s oceans and an useful base to study the link between global warming and the oceans, which absorb about a quarter of all carbon emissions.

“One of the first users will be the science community,” he says. “It’s designed to explore the ocean in a new way, mainly spending time under the sea, giving people the opportunity to live under the sea for a very long time, to observe, to undertake research missions, like marine biology, oceanography and climate issues.”

The project has also drawn support from former NASA Administrator Dan Goldin and the European Space Agency as well as other industrial organizations which are expected to help develop the vessel’s systems. It is no surprise that NASA is involved. The whole design and mission of the vessel makes the SeaOrbiter seem like a maritime version of the USS Enterprise!