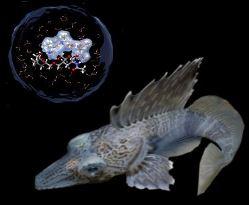 Ever wonder why fish don’t freeze in sub-freezing water? Or, how plants can survive icy cold winters? An international team of researchers from Israel, Canada and the US are working together to understand the nature of natural antifreeze proteins (AFPs).

Antifreeze is not just something necessary to keep your car from freezing up in the winter. The researchers say that plants and animals living in cold climates have AFPs which prevent ice growth and crystallization of organic fluid matter. Without such antifreeze, living matter would suffer from frost damage and even death.

Production of antifreeze proteins is one of the major evolutionary routes taken by a variety of organisms, including fish, insects, bacteria, plants and fungi. Understanding how this mechanism works is significant and has important implications for improving the world’s food and medicinal production. The international scientists include researchers from the lab of Dr. Ido Braslavsky of the Hebrew University of Jerusalem and from Ohio University in the US, in collaboration with Prof. Peter L. Davies from Queens University (Canada) and Prof. Alex Groisman from the University of California (San Diego).
The Hebrew University researchers studied the antifreeze protein of the yellow mealworm. This protein is a hyperactive AFP with apotency to arrest ice growth that is hundreds of times greater than the potency of fish and plant AFPs.

In their study, published in the American journal PNAS (Proceedings of the National Academy of Sciences), the researchers biochemically created a fluorescent marker version of the AFP that allowed for direct observation under a microscope lens. They injected this protein into custom-designed microfluidic devices with minute diameter channels.

The microfluidic devices were placed in cooling units engineered with a temperature control at the level of a few thousandth of a degree, so that ice crystals of 20 to 50 micrometers could be grown and melted controllably, all under microscopic observation.

Using their specialized system, the researchers were able to show that ice grown and incubated in an antifreeze solution remains coated with protein and therefore protected. They further showed that the AFPs bind ice directly and strongly enough so as to prevent the ice from growth even after there is no longer any further presence of protein in the solution.

The significance of the findings published in this study is not only on the scientific level but also practical. For example, fish AFPs are already used in low-fat ice cream to prevent ice recrystallization, thereby maintaining a soft, creamy texture. These proteins could be used in other frozen foods for maintaining the desired texture without additional fats, say the researchers.

In medicine, AFPs can be used to improve the quality of sperm, ovules and embryos stored in a frozen state, and for cold or cyropreservation of organs (freezing at extremely low temperatures) for transplantation. They can also be used in cryosurgery and in agriculture. Other studies on AFPs focus on preparation of recombinant plants and fish with improved survival rates under cold and dehydration conditions. Such recombinant crops may improve food dispersion over the world, the researchers believe.