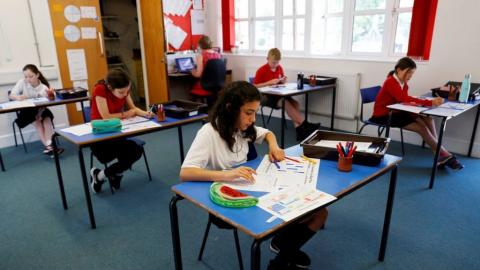 The opening of the educational system is not the reason for the coronavirus wave that began on September 1, a team of researchers from the Hebrew University of Jerusalem said Wednesday. They are calling on the coronavirus cabinet to return children under the age of 10 to school.

“Returning children up to the age of 10 to a safe educational setting should be the first step in leaving quarantine,” said the position paper, which was presented to Education Minister Yoav Gallant on Wednesday. “With the rise in coronavirus morbidity in September, an accusatory finger was pointed at the opening of the education system… We deny this and claim that children up to age 10 are not the catalyst for the spread of pandemic.

”The paper was also sent to the Health Ministry and coronavirus commissioner Prof. Ronni Gamzu. Ora Paltiel, a professor of epidemiology at the Hebrew University-Hadassah Braun School of Public Health, is part of the team that has been tracking infections among school-aged children since the start of the pandemic. They published their first position paper in April and have since then been collating research on the subject conducted in Israel and abroad to try to influence policy and advise the Health, Education and Finance ministries.

“We strongly believe the children are the victims of COVID management and not of COVID disease,” Paltiel told The Jerusalem Post. “They need and deserve to go to school for many reasons, not the least of them being health reasons. ”According to the team’s research, children who do contract coronavirus have milder cases, and the mortality rate of children under the age of 10 is almost zero. There is also a direct link between the age of the child and the chance of infection; many studies indicated that children under 10 are infected at as much as half the rate of older children and adults.

Children over 10 and teens are infected similarly to adults, although their morbidity is milder. There were very few cases of infection from children to teachers in educational settings, and usually it was the other way around, the report said. Regarding Israel specifically, Paltiel said there was a clear connection between the opening of the haredi (ultra-Orthodox) education system on the first of the Hebrew month of Elul and morbidity in that sector, especially among boys between the ages of 10-19.

“There is no doubt that going back to school in the haredi school system caused a great spike in infections,” she said, adding that one of the reasons for this might be crowding in those schools and in many of the student dorms. Already on September 1 and 2, the first days of school in the general system, there was a spike in infection, Paltiel said.“If we see a spike so quickly, it cannot be because of exposure [in the school],” she said.

As such, the HU team believes the summer break, during which parents and children traveled, stayed at hotels and went camping, led to an increase in infection. When children started school, they were already infected. “When they went back to school, they started transmitting the infection they acquired, and then we saw an outbreak in the whole community and not just in schools,” Paltiel stressed.

Within the Arab sector there was a third phenomenon: Throughout July and August, infection rates were rising in those communities among teens and people in their 20s and 30s because of the wedding season, and this trend stayed steady when school began at the start of September, she said. “You have to look at what caused these different spikes,” Paltiel said. “They look like they are all coming at the same time, when school opened, but they are for three different reasons.

”School is a “very important framework for kids to learn formally and informally,” and education is a big determiner of long-term health, she said. “As a society, we have a moral and ethical commitment to provide children of all ages with the opportunity for education,” the report said. “An educational framework is critical for learning, for acquiring social tools, skills and values, for exercising and for promoting social equality.

”Poor education at a young age could have a detrimental impact on the future of the country’s society and labor market, the report said. Lack of a framework would further weaken the country’s frailest parts of society, the poor and single parents who are less likely to be able to compensate for the lack of infrastructure, it added. Finally, in homes where parents work out of the house, many of them have to transfer their children to grandparents, thus increasing the risk for the grandparents.

There is precedent worldwide for opening preschools through grade 10 successfully, such as in Denmark, Taiwan and Sweden, Paltiel said.Immediately after lockdown is the ideal time to send young children back to school because any infection that might have been among families would have spread and passed, she said. “We urge the government to understand the seriousness of the situation, as an entire generation may lose an important opportunity to learn, advance and contribute to society,” the report concluded. “Along with investment and concern for the proper functioning of the health system, there is great importance in investing in Israeli children.”