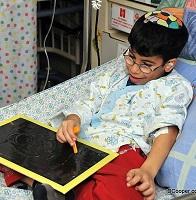 At first glance, there is little to distinguish Adi Levy’s art class from other elementary school art classes. Sitting with six eight-year-old school kids on a Sunday morning in early September, Levy outlines for the class the structure of a circle-based design called a mandala and challenges the kids to describe the image in their own words.

At the beginning of the second week of the school year, both students and teachers are enthusiastic and engaged, and eager to finish the lecture portion of the class in order to move on to the practical side of the lesson. After a 10-minute discussion, Levy hands out art supplies for each student to design his or her own mandala.
But the class is far from a “regular” art class and the school setting is far from the traditional classroom. For one thing, all the students – patients in the pediatric ward at Hadassah University Hospital in Ein Kerem, Jerusalem – are dressed in hospital gowns, and several are attached to roll-around intravenous-drip stands. For another, the parents attending the class are an even mix of Arab and Jewish, and the class is conducted in Hebrew and Arabic in a nod to the hospital’s ethnic mix.

Spread out over five floors of Hadassah’s Mother and Child Center, the school – officially named the Pilot School for Hospitalized Children at the Hadassah Medical Center – was founded in 1982, making it Israel’s oldest school in a hospital. And, with a unique student population and educational mandate, the school is leading a revolution in approaches to education that is making waves not only in hospital education, but across the school system.

“When we started, there was basically no such thing as a ‘hospital school,’” says Edna Pinchover, principal and founder of the school. “Most hospitals had designated areas they called ‘school,’ but they really were little more than play areas for little kids built without forethought and staffed by one woman who may have known little or nothing about education,” she tells The Jerusalem Report .

“But it was clear to me that hospitalized kids need schooling. At first, with no real models to follow, there were many questions to answer. What sort of model should we follow? What type of school do we build? Do we teach the subjects they are missing at school or do we focus on other things? And most importantly, do sick kids really want to study?” Pinchover says the answer came quickly.

Children undergoing treatment are a captive audience, for several reasons. Firstly, fate has removed them from their natural sur - roundings and friends, so the opportunity to study is something familiar to hold onto during a difficult time.

As a result, the school grew steadily and quickly. After starting with a staff of one, in the old pediatric ward at Ein Kerem, Pinchover now heads more than 100 staff and adjunct teachers spread out over four Hadassah school campuses in Jerusalem – Ein Kerem, Mt. Scopus, a psychiatric facility downtown and the Herzog rehabilitation hospital. Students range from outpatients facing non-invasive hearing tests to cancer patients weathering long-term chemotherapy and children with severe brain damage in various stages of consciousness, including those in comas, on respirators, or who have been written off by others as little more than “vegetables.”

For the latter group, education includes a lot of music, touching, feeling, and physical interaction. Teachers say that while the students virtually never manage advanced reactions such as smiles, staff has learned to discern children’s reactions to school activity, such as increased heartbeats or particularly open eyes, which indicate when the student-patient is excited.

IN ADDITION, she says, there is the fact that hospitals are necessarily a scary place, with unfamiliar surroundings and medical procedures that can be painful, invasive, embarrassing, and more. “It’s true, the law stipulates that hospitalized children do not have to attend school.

Given the nature of the student population, it is no surprise that a large portion of the curriculum focuses on art and science education. The staff includes music and art therapists, who provide constructive avenues for children to their frustrations, fears and anger about having taken ill, as well as tools to express joy and excitement, when their medical conditions begin to improve. On all floors of the Mother and Child Center, school walls are lined with paintings, drawings and art projects completed by students.

In addition, given the hospital setting, science lessons are particularly relevant. With virtually every patient in the school having routine blood tests, staff members give regular classes about the circulatory system, the different types of blood, the function of blood in the body, and more, as well as specific classes about blood tests (How much blood do they take? How long does it take?).

The day I visited, a group of about 10 students (and their parents) were engrossed in a power-point presentation outlining the process of digestion, followed by a demonstration by a model “digestion system” constructed of socks and hollowed-out pillows used to demonstrate the large and small intestines, the stomach and the rest of the digestive tract. As inside the human body, the cloth “intestines” are rolled tightly in - side a pillow “stomach” and, eventually, the children are invited to unroll the cloth to the actual length of an adult intestinal tract – nearly a full loop around the classroom.

Now in its 32nd year, the school is making waves far outside the Center. In May, Education Minister Shai Piron honored the school with the 2013-14 School of the Year prize, and Pinchover says she frequently receives phone calls and visits from traditional schools looking for ideas about how to implement her ideas about relevant education.

In addition, the school is in the final year of a five-year process to become an official pilot-study school and is planning to be - come one of the Ministry’s primary teaching centers for innovative education. Not surprisingly, medical staff says the school has revolutionized pediatric care at the hospital, both for the students being treated and for the doctors administering the care.

“It is very important for us to know what is going on inside a child’s psyche,” says Dr. Eitan Kerem, Chairman of Pediatrics at Hadassah and a specialist in pediatric respiratory and pulmonary diseases. “But that is something the medical staff has a hard time accessing, almost by definition.”

Speaking to The Report, Kerem says teachers are in a unique position to connect with patients because they are not identified with the negative aspects of medical care that doctors cannot avoid.

“Teachers see the kids in a more kid-friendly space and they are trained to discern how the child is coping. Teachers are also ‘safe’ people for children to open up to here. The kids know the teachers aren’t going to hurt them the way doctors sometimes have to. They know the teachers won’t be invading their private areas the way doctors and nurses have to as a matter of course.

“That opens up a space for the staff to create different relationships with children and their parents, and for the kids to open up to the teachers. We consult regularly with the teachers and Edna to make sure we stay up- to-date on the emotional health of our patients, and it plays an important role in the care we are able to provide,” Kerem says.

Perhaps the clearest illustration of Kerem’s assessment is the case of six-year- old Liya Issakov, a leukemia patient who has spent extended periods of time at Hadassah since being diagnosed with the disease four years ago. Playing a math game with a national-service volunteer, the first grader exudes happiness and energy, despite the mask over her mouth to protect against germs.

After a period of remission, the cancer reappeared earlier this year and the treatment has left her immune system weak. LIYA’S MOTHER, Ina, a Russian immigrant who has lived in the Jerusalem area since arriving in Israel in the early 1990s, says the school is meaningful enough to her daughter that she chose to attend school here today, despite having visited Hadassah for just a one-hour test. “We arrived here at 8:00 this morning for a quick test,” Ina tells The Report. “Liya could easily have made it back to school, but she wanted to stay to have her school day here.”

Issakov says her daughter missed most of her pre-school years due to cancer treatments, but emerged from that experience with full knowledge of the alphabet, shapes, basic arithmetic and more. Going into first grade, Liya’s parents, her new teacher and teachers at Hadassah all say she’s developed normally, both academically and emotionally. The latter attribute that growth to a perceptive staff member who encouraged the then-three-year-old to begin a unique art project.

“The original treatment included a regular dose of steroids, which made her antsy and irritable. But, after lunch one day, one of the staff members noticed Liya looking at some magic markers we had on our equipment cart. She gave Liya a marker, and the child proceeded to draw on the styrofoam tray left over from her lunch. She was able to express her emotions on the trays in a way she couldn’t have verbalized at such a young age, but the drawings were a valuable tool for that,” Issakov says.

Then, when the leukemia came back in early 2014, Liya was forced to return to the hospital (this time in an isolation ward). School staff provided Styrofoam trays for Liya to continue her project, and also distributed trays to staff members and visitors for “get well drawings” for Liya. The result is an exhibition of styrofoam art that tracks both the progress of her treatment, as well as her development as a little girl and as an artist.

The exhibit is an accurate presentation of growing up with the cancer experience, as well as a personal history of treatment over the past four years. Early drawings are heavy with ominous reds and blacks, with lighter colors appearing when she was feel - ing better. During a short water break, she says her favorite tray is a simple snowman with shoes.

“I don’t know why,” she says with an eye toward the math activity. “I guess I like that one because he looks happy.”