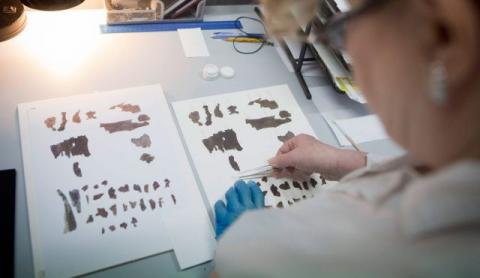 Why was Canaan really exiled? A website featuring ultra-high resolution photographs of the Dead Sea Scrolls brings hidden letters to light for the first time.

According to the book of Genesis, after the flood Ham − the son of Noah − “saw the nakedness of his father.” When Noah discovered this, he cursed Ham, Ham’s son, Canaan, and all their descendants: “Cursed be Canaan; a servant of servants shall he be unto his brethren” ‏(Genesis 9:22-25‏).

Historically, this curse became the excuse for justifying slavery, because Africans were considered the descendants of Ham. Jews also saw this as the ultimate reason to remove the Canaanites from the land. But now, with the help of new technology, three experts in ancient Hebrew have been able to discern a different reading of the passage from a fragment of one of the Dead Sea Scrolls.

Prof. Elisha Qimron had been working on the final stages of the second volume of the new edition of the Hebrew writings of the Dead Sea Scrolls when a particular fragment of a Dead Sea Scroll had been posted on the joint website of Google and the Israel Antiquities Authority − the Leon Levy Dead Sea Scrolls Digital Library website.

The website features very high resolution photographs of the Dead Sea Scrolls using a special camera, which not only records the condition of the actual scrolls to help preserve them, but also brings to light for the first time faded and hidden letters.

The fragment, found in Cave 4 at Qumran, measures a paltry 7 by 10 centimeters and is very poorly preserved. However, one look at the new photograph of the fragment on the site was enough for Qimron to put off publication of the volume to try and decipher the text.

The word “El” appears close to the phrase “tent of Shem,” and might indicate that the intent was to “Hashem” as a synonym for God. By comparing this text with another of the Dead Sea Scrolls, the scholars have come up with another interpretation. The scholars believe that the word “tent” can be interpreted as “land,” and that the text may mean that Hashem ‏(God‏) lives in the “land of Shem.” Thus, Canaan invaded a land that was not his, and that was the reason his descendants were exiled, not because of his father’s sin.

This interpretation is also known from the Apocryphal Book of Jubilees, which survived in the Ethiopian sacred language of Gez and in Greek. There, it also states that Canaan’s sin was in taking the land in a manner different than the way Noah had intended to divide it, ignoring his brothers’ warning not to do so. “Whoever wrote this text knew this interpretation from the Book of Jubilees,” Ariel said. The conclusion is that this alternative tradition to the biblical version was common in the Judean Desert in Second Temple times and later disappeared.

The passage after the Noah story goes on to describe Abraham’s visit by three messengers, who tell him Sodom and Gomorrah are to be destroyed. All attempts to connect the passages into a continuous story have failed, leading scholars to conclude that this was originally a collection of interpretations of Genesis stories.

Yuditsky goes even further, suggesting that “all these segments talk about places where the bad guys lose. In their time, the Judean Desert people saw as the victors their enemies, the Pharisees and the Sadducees whom they believed were distorting the true Torah. This text might have been to prove that the bad guys might have good periods, but in the end they are punished.”