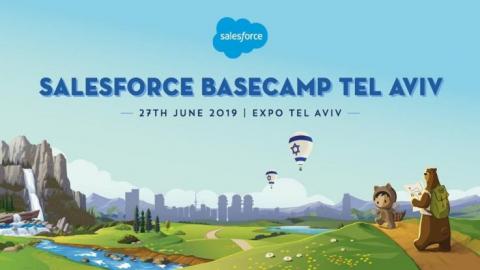 San Francisco-headquartered cloud technology giant Salesforce will significantly expand its Israel-based operations in the coming years, a company executive said on Thursday, making Israel the company’s second-largest research and development hub worldwide. Founded in 1999 by Marc Benioff and Parker Harris, Salesforce is recognized as a global leader in the field of cloud-based customer relationship management (CRM) applications. More than 150,000 companies use the company’s platform today.

The company’s R&D facilities in Israel, built on acquisitions made in recent years, already play an important role in building strategic technologies and products for the company. The centers focus primarily on developing solutions in the fields of artificial intelligence, big data and cybersecurity. Salesforce, which first entered into the Israeli market in 2011, now intends to recruit dozens of new employees, both this year and next, to turn Israel into the company’s second-largest research and development center worldwide, after the United States.

“For our customers, it is a statement that we are here to stay, and reassures the Israeli market that we are here to deliver a better service and with much more manpower,” Olivier Elbaz, Salesforce senior regional vice president, told The Jerusalem Post on the sidelines of the company’s Basecamp Tel Aviv 2019 event. “Combining the three pillars of artificial intelligence, marketing and analytics through data, and security will deliver innovation for our hundreds of thousands of customers around the world.”

Salesforce has made five acquisitions in Israel to date, including the purchase of AI-powered marketing intelligence platform Datorama for approximately $850 million in July 2018 and, most recently, conversational intelligence platform Bonobo for an reported $40m.-$50m in May. The company has also invested in 12 Israeli companies to date and is expected to further widen its investment portfolio in Israel after Salesforce Ventures, the company’s venture arm, launched a $125m. fund to back enterprise cloud start-ups in Europe, the Middle East and Africa.

Elbaz also announced the establishment of a local Salesforce “university” in partnership with John Bryce Training, to educate local employees to use Salesforce’s platform. Rather than continuing to leverage foreign companies to train staff, programs will now be available in Hebrew and at a significantly lower cost than before. “We’re going to grow the ecosystem, which means our stakeholders – our customers, partners and Salesforce – will benefit from a university in order to train their people,” Elbaz said. “We’ll be able to take special communities, such as the ultra-Orthodox, Israeli-Arabs and the Russian immigrant community, and be able to teach them and train them on Salesforce. We want to bring those people back to work, using Salesforce. We want to grow, and we want to do good at the same time.”

The program, the company hopes, will also contribute toward fulfilling a 2017 growth forecast published by market intelligence firm IDC, which estimates that Salesforce and its ecosystem partners will enable the creation of 3.3 million jobs within their customer base from the use of cloud computing between the end of 2016 and the end of 2022.

Over the same period, IDC also forecasts that the benefits of cloud computing accruing to Salesforce customers will add $859 billion in new business revenue to local economies. Global research firm Gartner forecasts that CRM will be the single largest revenue area of spending in enterprise software by 2021. Earlier this month, Salesforce announced its mega-acquisition of self-service analytics platform Tableau Software for $15.7 billion.

The Washington-headquartered data visualization software company names more than 86,000 organizations around the world as its customers, including Charles Schwab, Verizon, Schneider Electric, Southwest and Netflix.