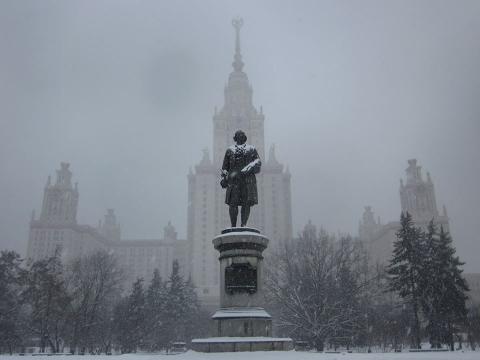 There is not a single higher education institution in Russia able to continuously preserve its spot in the top two hundred leading world universities in all reputable leagues’ tables, not to mention the top one hundred.

n March 2020, Russian President Vladimir Putin amended the Russian Constitution, nullified his previous terms in office, and made himself eligible for two more presidential terms, ending in 2036. This nullification has become known as obnulenie, while Russia’s opposition preferred Putin obnulilsya. But there is another, perhaps even more important obnulenie that took place quietly in Russia. In 2013, at Putin’s request, Russia’s Ministry of Education and Science initiated the Russian Academic Excellence Project, also known as 5-100. The goal was to get at least five Russian universities into the top 100 best universities in the world. Very generous funding was allocated to twenty-one universities as selected by the state. Seven to eight years later, none of these universities made it into the top 100. What this means is that Russian universities, along with Putin’s efforts to reclaim international academic standing, were simply nullified by the world academic community.

The tallest university in the world, Lomonosov Moscow State University rests on its decades-old laurels and enjoys a reputation earned during the Soviet era. However, the old giant’s glory is fading away with no replacement for those academics that moved to the West in the early 1990s, after the Soviet Union’s collapse. The university’s rector since 1992, Victor Sadovnichy, will lead the university until the end of 2024, when he will turn eighty-five. But even then, he can be reappointed for another five-year term by Putin. Sadovnichy is portrayed as a prominent mathematician turned university leader, while in fact, he chaired the university’s Communist Party committee under the Communist regime. Sadovnichy’s real story is that of a former partokrat transformed into khozyajstvennik.

The aged rector is preoccupied with administrative matters and business projects. Under Sadovnichy’s leadership, Lomonosov Moscow State University lived through several major scandals, widely publicized in the media. Scandals included poor intellectual environment, corruption, and sexual harassment. These scandals, no matter how loud, brought no improvements or imprisonments. Lomonosov Moscow State University prefers riding the old cart, relying on its Soviet-era reputation and dated achievements in mathematics and natural sciences. Simply put, it is more about business as usual and preserving the status quo than climbing up world university ranking tables.

Led by Yaroslav Kouzminov for almost three decades, the Higher School of Economics has no campus, which is both unfortunate and typical for most post-Soviet universities. The school is unable and unwilling to hire internationally, at least in quantities and qualities that would advance the university in world rankings, resorting instead to inbreeding. The university offers monetary rewards for publications, while this should be the requirement. With rare exceptions, faculty members are unable to publish in peer-reviewed journals, opting instead for co-editing scholarly volumes with renowned Western scholars, funding joint research projects, inviting guest speakers, or listing faculty from top western universities as advisors, academic supervisors, and leading research fellows. Overall, this is a wrong strategy that will lead nowhere.

In accordance with the Stalinist tradition of economic branch affiliations, the University is under the Ministry of Trade and Economic Development. In the Soviet Union, each higher education institution worked under the auspices of a relevant branch Ministry, and this outdated system has been preserved virtually intact. Moreover, the rector’s spouse, Elvira Nabiullina, is the ex-Minister of Trade and Economic Development who now serves as the Chair of the Central Bank. As a result, the university is more of a state-controlled family enterprise than an autonomous educational institution. Bounded in the Soviet mentality of nepotism and blat, the university is unable to break with the old tradition. There are very few international students and faculty. A selection of classes is taught in English, but the medium of instruction is Russian.

The Russian government turned its sight to the Far East, where it has its border with China. Several years ago, Russia brandished its brand new Far Eastern Federal University, a product of university mergers and the manifestation of the emerging trend of post-Soviet gigantomania. The school was branded as a future hub for international education and research on the country’s eastern outskirts, a window to the Asia-Pacific region. A two-billion-dollar campus linked with the mainland by the billion-dollar bridge was quite an investment even by world standards, and one of a kind for the entire post-Soviet space. The bridge alone is the largest cable-stayed suspension bridge in the world.

Far Eastern Federal University started facing fundamental problems since its very inception. The dean of the physics department, Alexander Molochkov, pointed to “dramatically poor academic staff” with weak research records and low scholarly profiles. International recruitment also failed. Foreign applicants for faculty positions “had terribly poor profiles. Right now not many scientists are willing to work at FEFU, mainly because we are still in the process of moving in.” The Soviet tradition to invest in hardware at the expense of human resources took its toll: huge grey concrete buildings turned out to be unattractive for foreign researchers and scholars.

In essence, the school is a set of poorly filled concrete boxes. One may call it a Lego campus, assembled of boxes and empty inside. Most of what Far Eastern Federal University can offer in terms of international faculty are visitors from neighboring Japan, on one or two months stay and certainly not distinct with strong English language skills. There are almost no international students on campus. After failing to attract international scholars in social sciences, the university is now declaring plans for natural science-oriented research. Salaries were not competitive from the start, around $30,000 plus a small apartment to live on campus. Such benefits failed to attract even professors from Moscow, not to mention internationally recognized academics. As a result, faculty members are almost entirely Soviet and post-Soviet degree holders only.

The same faces mean the same traditions, the same inefficiencies, and the same corruption. Contrary to earlier claims, the University has failed to establish English as the medium of instruction. In 2016, the rector of Far Eastern Federal University, Sergey Ivanets, a former deputy prime minister with extensive diplomatic experience, was arrested on suspicion of abuse of power that caused damage estimated at around US$300,000. More corruption scandals followed.

No oil dollars, no future

In 2012, Yevgeny Yasin, a former Minister of the Economy and currently the academic supervisor of the Higher School of Economics in Moscow, suggested that it might be too early to say whether Far Eastern Federal University has a future or not. Eight years later, it is very clear that the University has no future, at least when it comes to world-class status. At present, Far Eastern Federal University is nothing else but Putin’s white elephant with no clear perspective for development and growth. Apparently, oil dollars alone are not enough, as changes in organizational structure and academic culture are much needed.