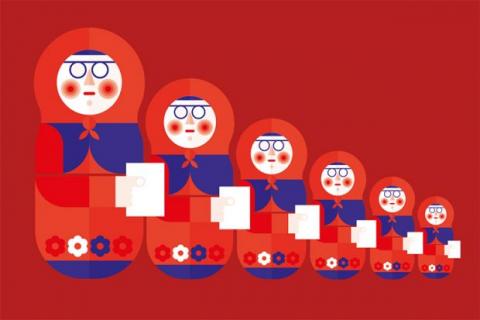 Academic journals in Russia are retracting more than 800 papers following a probe into unethical publication practices by a commission appointed by the Russian Academy of Sciences (RAS). The moves come in the wake of several other queries suggesting the vast Russian scientific literature is riddled with plagiarism, self-plagiarism, and so-called gift authorship, in which academics become a co-author without having contributed any work.

The RAS commission’s preliminary report documenting the problems and journals’ responses to them is “a bombshell,” says Gerson Sher, a former staffer at the U.S. National Science Foundation and the author of a recent book on U.S.-Russia science cooperation. The report, released yesterday, “will reinforce the suspicions and fears of many—that their country is not going down the right path in science and that it’s damaging its own reputation,” says Sher, who applauds RAS for commissioning the investigation.

Russia’s roughly 6000 academic journals, the vast majority published in Russian, are popular among the country’s academics. A 2019 study found that Russian authors publish far more in domestic journals than, for instance, their counterparts in Poland, Germany, or Indonesia. But standards are often low. In March 2018, for instance, Dissernet, a network aimed at cleaning up the Russian literature, identified more than 4000 cases of plagiarism and questionable authorship among 150,000 papers in about 1500 journals.

And Russian authors frequently republish their own work, says Yury Chekhovich, CEO of Antiplagiat, a plagiarism detection company. In September 2019, after sifting through 4.3 million Russian-language studies, Antiplagiat found that more than 70,000 were published at least twice; a few were published as many as 17 times. Chekhovich believes most instances are due to self-plagiarism. Meanwhile, the website 123mi.ru claims to have brokered authorships for more than 10,000 researchers by selling slots on manuscripts written by others that were already accepted by journals.

The RAS commission, formally known as the Commission for Counteracting the Falsification of Scientific Research, investigated the problem independently. It has experienced fraud busters on board. Dissernet co-founder Andrew Zayakin, a physicist at the Institute for Theoretical and Experimental Physics, is the commission’s secretary; it also includes several other “academic activists,” Zayakin says, including representatives of the Society for Evidence-Based Medicine, the Russian Association of Scientific Editors and Publishers (RASEP), and Russia’s Scientific Electronic Library (eLibrary). The commission used software to search hundreds of Russian-language journals—ranging from natural sciences, agronomy, psychology, and medicine to economics and law—for text overlap. Suspicious papers were checked manually to verify that they counted as plagiarism or self-plagiarism. By comparing the author lists of papers that had been published twice or more, the commission also identified apparent cases of “obscure authorship”—academics who were an author on one version of the paper but not the other.

Eight journals explicitly refused to address the problems; the report urges that five of them be removed from the Russian Science Citation Index, a database run by eLibrary. (Because publication in indexed journals is often a prerequisite for promotions and funding in Russia, delisted journals are thought to be less attractive to authors.) Victor Glukhov, eLibrary’s deputy director, says the group’s own expert council will look into the matter, but is likely to agree. Zayakin emphasizes that the exercise is a work in progress; he hopes the threat of being delisted will persuade journals that haven’t yet responded—or have refused to pull papers on flimsy grounds—to take the commission’s findings seriously.

The same RAS commission caused a stir in September 2019, when it recommended not voting for 56 candidates—out of a total of more than 1800—during the academy’s membership elections, because of their alleged involvement in plagiarism and other types of misbehavior. That “caused a lot of tension over how the commission is organized and who pulls the strings in it,” says Dmitry Malkov, a science communication scholar at ITMO University in St. Petersburg. (The academy had about 200 new memberships available; only a few of the 56 were elected.)

The new investigation “caused tension and conflict” as well, says commission member Anna Kuleshova, chair of RASEP’s Council on the Ethics of Scientific Publications. Kuleshova says some Russian journals were unaware of internationally accepted standards around ethical publishing and retractions. “I hope that our work will not only reduce scientometric distortions, and help us to get rid of garbage publications,” she says, “but will also draw attention to issues related to the management of science.”