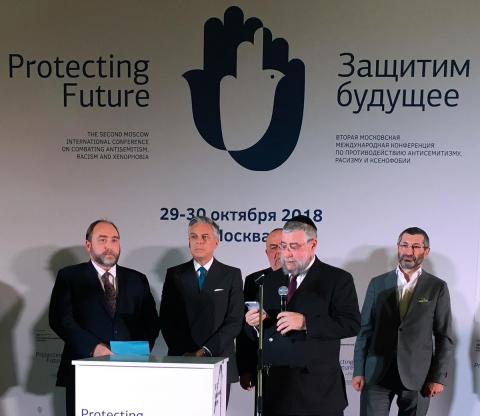 When hundreds of Jewish delegates from around the world convened in the Russian capital this week, their Russian hosts had prepared an item of good news they wished to deliver. Anti-Semitism in Russia had fallen to a record low. Compared to East European countries, Russia, once the land of state-sponsored persecution, now came last. But in the wake of the synagogue massacre in Pittsburgh on Saturday, the Moscow conference aimed at combating anti-Semitism, xenophobia and racism suddenly became a lot more timely.

Prominent members of Russia’s Jewish leadership held prayers for the 11 victims, who were gunned down during a morning ceremony at their Tree of Life synagogue. U.S. Ambassador to Russia Jon Huntsman somberly read out each of their names to a large crowd including senior Russian officials and Jewish, Muslim and Christian clergy.

The conference, the second by the Russian Jewish Congress, was organized some time ago. But the events in Pittsburgh set the tone. “Having something as tragic as that take place on the eve of this has given what we’re trying to accomplish here a much greater sense of urgency,” said Mark Levin, executive vice chairman and chief executive of the National Coalition Supporting Eurasian Jewry.

Some speakers are closely linked to the predominantly Jewish neighborhood of Squirrel Hill in Pittsburgh, where the attack took place. Goldschmidt’s cousin is Rabbi Daniel Wasserman, a member of the Pittsburgh Orthodox community and one of the volunteers who made sure the bodies were properly respected when being moved from the crime scene, as Jewish tradition mandates.

The president of the Russian Jewish Congress, Yury Kanner, found out about the mass shooting from his son, who lives in Pittsburgh with his American wife. Remarking on the deadliest attack on Jews in American history, Kanner’s feelings shifted between bemusement and shock.

He detailed how Russian Jews sought refuge in the United States in the 19th century, escaping the large-scale pogroms of the czarist era that ravaged the Jewish settlements on the western fringes of the Russian empire. “For Jews at that time, America was the place you could go. But this totally changes the Jewish American story.”

Like the century before it, the Soviet era was riddled with anti-Semitism. Jews were often discriminated against by the government, from restrictive quotas at top universities to having the equivalent of a letter ‘J’ marked in their internal Soviet passports. Anti-Semitic imagery and slogans were rife and generally accepted by Soviet society.

Starting in the 1970s, Soviet Jews began leaving for Israel and the West. By the time the Soviet Union collapsed in 1991, a 1-million-strong exodus had taken place. The chaotic 1990s saw many more go.

But today, the community — which Jewish leaders estimate to number up to 1 million, half of whom are in Moscow — is thriving. Jewish schools and synagogues throughout the country are hives of activity. President Vladimir Putin takes to state television to congratulate Jews on religious holidays.

And attacks on Jews and Jewish property are falling. According to a recent poll by the independent Levada Center, commissioned by the Russian Jewish Congress, 80 percent of those surveyed, both Jews and non-Jews, said there is less anti-Semitism than during Soviet times.

Still, the United States and Israel are often viewed as the only “real future” for world Jewry, Goldschmidt said. “So many Americans ask me, ‘When is the last Jew leaving Europe and turning off the light at the last synagogue?’” he said. “But what happened in Pittsburgh shows America is no longer apart from the rest.”