Russia is turning into a ‘disconnective society’ 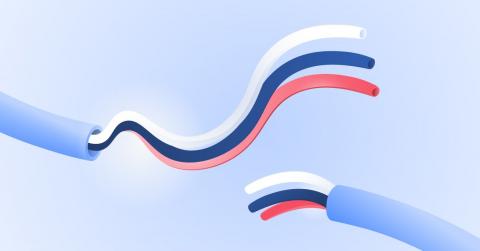 Nearly two months on from when Russia’s tanks rolled into Ukraine, it is still unclear where the Kremlin has been able to achieve any political or military goals. The blowback seems clearer: Russia’s increasing economic, political and technological isolation from the rest of the world.

But in the Kremlin, this blowback could in fact be seen as a longstanding domestic goal. After all, the conflict’s enforced isolation actually helps the current regime consolidate its dominance of Russia’s information flows. Within a month, the Kremlin has forced the closure of all remaining independent media outlets. Similarly, it has sought to block major global social networking platforms and has approved laws to crack down on individual online dissent. Many people who were still trying to express their opposition to the regime in Russia have now had to flee the country. One may argue that this new straitjacketed political reality, which couldn’t be imagined just several months ago, is the Kremlin’s most significant achievement of the conflict.

This achievement is not just a side-effect of the war against Ukraine. Instead, it is an outcome of persistent and pre-existing efforts to transform Russia into a disconnective society. These efforts are driven by a notion that it’s impossible to protect the internal legitimacy of the current leadership and keep citizens loyal if Russia remains relatively open and linked up to the global networked system.

Disconnection and the emergence of a disconnective society

Since the end of the nineties, the attention of the research community was focused on new forms of connectivity via emergent information technologies. A concept like a network society, developed by Manuel Castells, highlighted that digital innovation led to new social structures. These are unbounded by physical space but exist in non-spatial flows. On the other side of this process is disconnectivity, which remained a relatively marginally studied social phenomenon in this context until a decade ago, when interest in various forms of disconnection started growing. That interest was initially mainly focused on a specific type of social interaction (e.g. unfriending) or on echo chambers and information cocoons in a context of social polarization. Similarly, research into disconnection informed general attitudes to online platforms (digital disengagement) and new forms of Internet regulation (the so-called splinternet, balkanization and digital sovereignty). But there is a broader national political context to reckon with here too. In that light, I propose considering looking at a political formation like Russia as representing a disconnective society.

The construction of a disconnective society is a strategy for the survival of a political regime that cannot maintain itself in the competitive conditions of a global networked society. The combination of maximum isolation from the outside and effective propaganda inside can help preserve the internal legitimacy of the leader.

Disconnective politics seeks to transform a relatively open society to a closed one. The main characteristic of a disconnective society is the rupture of any ties with what is considered a zone outside the boundaries of the socio-political system designated by the authorities. Political leaders in a disconnective society play the role of a black hole, which increasingly draws society into itself. The forces of political gravity close the system from external information, political, cultural, social and financial flows.

Disconnective society relies on the application of disconnective power. That is the power of disintegration and untying in different spheres of lives, starting from economic relationships and ending with personal interactions. The latter can be explicitly seen in relation to the disintegration of horizontal networks of interpersonal communication, which may challenge the state through various forms of bottom-up peer-to-peer collaborations and mobilization.

The disconnective power can also be seen through the mobilization of resources that support the development of independent internal systems that may enable the emergence of a disconnective society. That is particularly important whenever disconnective logic is applied in a relatively open system that has been integrated with global cross-border networked structures. In that case, the act of disengagement requires first the development of disconnective infrastructures. This is how Russia has been preparing for disengagement from the outside world in all spheres of life.

For the last ten years, Russia’s authorities not only created new walls to support isolation from the external environment but also developed an infrastructure that will allow its social structure to survive isolated behind these walls. This process seems to accelerate since the protests in 2011−2012 when the people in the Kremlin realized they underestimated the role of digital platforms for mobilizing horizontal networks. Significant state budgets were then assigned to develop disconnective infrastructure (this also created a new area of corruption.) The disconnective logic could be seen both in the development of local products and capabilities that limit access to external providers and networks. Many examples can illustrate this trend. GLONASS was developed as an alternative to GPS. «MIR» credit payment system offered an alternative to Visa and Mastercard. The development of isolated communication and media infrastructure relied on new regulations and legal initiatives. The isolation of the Internet started from experiments to block specific services and ended with a large scale transformation of technical infrastructure based on the «Sovereign Internet» bill, which was created to «protect Russian Internet from external threats».

We also could see many failures to develop alternatives to Western platforms. Rutube, for instance, or the efforts to create Russian Wikipedia or Russian search engine Sputnik (the failure of the latter was compensated by taking Yandex under state’s control). Any political crisis, meanwhile, was an opportunity to approve new restrictions on international internet companies, like the localization law for foreign internet companies. Russian government readily created new obstacles for content platforms based outside Russia, like slowing down access to Twitter. Examples, though, go far beyond the domain of information technologies. The so-called «importozameshenie» — substitution of foreign products with local ones could be seen as a state-sponsored strategy for any sector of the economy. The disconnection in the cultural industries could be seen through new restrictions favouring Russian cinema and the limiting of access to any cultural content that goes against so-called traditional values. In the education system, English was removed from the list of core subjects. Blocking LinkedIn made it more challenging for Russian users to become a part of the global talent ecosystem.

We also have seen how the logic of disconnective actions became the dominant part of everyday interpersonal communication in Russian social networks, as well as a strategy to disintegrate uncontrolled horizontal networks within Russian civil society. State-sponsored distribution of disinformation triggered disconnective processes that created waves of social untying. Unfriending and banning became not only a common response, but also a performative act indicating social boundaries. The disconnective power of disinformation campaigns became a new political tool to divide and rule. However, the disconnective project could not be completed without a crisis that would help activate the accumulated potential for disconnectivity

State of exception and disconnective power

Every act of disconnection requires justification and may fail without a certain level of legitimacy. Therefore, while everyday life allows the development of disconnective infrastructure, it does not provide enough impetus for a full disconnective switch. In that light, one may see a growing gap between disconnective potential and the system’s actual state that remains relatively open and connected to the global networks. Bridging this gap requires an emergency that, on the one hand, may provide legitimacy for the large-scale act of disengagement and, on the other, may trigger external actors to initiate disconnection from their side.

Agamben’s notion of the State of Exception helps establish the link between crisis and disconnection. According to Agamben, the emergency allows the formation of a campsite where the state of exception becomes the new normal. The camp symbolizes the transition from a relatively open to a closed system — a transformation to a disconnective society. The crisis offers an opportunity for the full manifestation and realization of disconnective power.

The aggression against Ukraine can be considered in that light, not only as an act of aggression toward external actor but also as an act to complete the project of disengagement. That’s why the Kremlin seems to celebrate new sanctions while responding to them with internal acts of disconnection (e.g. blocking any major foreign social media and deploying local financial tools). We also see an accelerated process in the development of further disconnective infrastructure (e.g. registering local versions of international brands and developing new local alternatives of international platforms e.g. Rossgram as an Instagram alternative).

So the Russian invasion of Ukraine has only one political achievement. It has helped to complete a sweeping disengagement of Russia to protect the internal legitimacy of Putin’s regime. In that light, addressing Russia as a disconnective society is essential to understanding its aggression against Ukraine. The strength of Ukraine here is the strength of its horizontal ties, the strength of global networks, as well as new formats of synergy between civil society and the state. Thus, the war between Russia and Ukraine is a war between networked and disconnective types of societies. The former looks weaker but has greater resilience. The latter knows how to intimidate but depends on a fragile power vertical.

The major question now is if Russia as a disconnective society can be sustainable in the long term, even if it’s supported by internal propaganda and replacement of global systems with internal ones. So far, many Russians are shocked by the impact of disconnection on their everyday lives. In that light, while disconnection seems to diminish risks to the political legitimacy of Putin’s regime, it may also lead to an internal disconnection between the Kremlin and the Russian society. In that case, any current triumph of disconnection is also the beginning of its failure.