Russia Is No Mideast Superpower 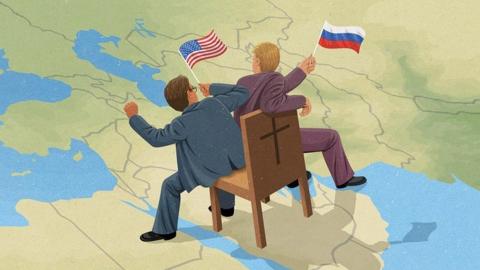 The Russian Ministry of Defense pulled out all the stops for its annual arms expo outside Moscow in late August. For three days, defense ministers and dignitaries from 41 countries, including from the Middle East, were treated to exhibits of cutting-edge technology, live-fire demonstrations, ballerinas pirouetting on tank turrets, and the trailer for an action movie about the 2015 rescue of downed Russian pilots behind enemy lines in Syria.

This spectacle occurred the same week as the United States’ bungled evacuation from Afghanistan. The message was clear: Russia is back in a big way on the global stage, and especially in the Middle East.

Russia has long been exploiting U.S. missteps and doubts among some longtime U.S. partners to widen its footprint in the Middle East. Yet the threat it poses to the American-led security order in the region is less dire than the recent warnings from such Trump-era figures as former National Security Advisers John Bolton and H. R. McMaster would suggest. Especially in the Arab world, Moscow’s lofty aspirations outstrip its actual influence. U.S. policymakers should avoid overstating Russia’s capabilities in the Middle East as they work to recover from the Afghanistan debacle, reassure partners, and refocus the United States’ military engagement toward Asia.

By some metrics, the Russian role in the Middle East is formidable. Moscow deployed military forces and mercenaries to war-wracked Syria and Libya, confirming that it excels at filling power vacuums left by Washington. The Kremlin has also used a variety of other means to insert itself into the fabric of North Africa, the Levant, and the Gulf. It sells arms to Arab states such as Algeria, Egypt, and Iraq and works closely with the Saudis on managing global oil markets through the OPEC Plus arrangement. Russian and Israeli leaders tout their close people-to-people ties while working behind the scenes to avoid tripping over each other in Syria.

Moscow manages these military and diplomatic forays rather nimbly and at low cost. President Vladimir Putin’s regime doesn’t have to worry about oversight from an independent parliament or free press, meaning Russian policy is not hamstrung by concerns about blowback or human rights abuses. The latter trait is especially appealing for Arab autocrats who’ve often chafed at Washington’s conditions-based aid. Libya and Syria are prime examples of how this approach confers an advantage on Russia: by demonstrating that it can engage with unsavory local and regional actors that are off-limits to the West, Moscow is now a power broker in both conflicts.

Yet the strategic impact of Russian influence in the Middle East is more modest than many assume. If one looks a little closer at the Kremlin’s forays into the region, its disappointments and failures soon become apparent. This is due to the limitations of Moscow’s policy toolkit and, especially, the complexities of the Middle East’s political landscape. Despite being plied with Russian attention, regional actors hardly behave as Russia’s docile clients. Instead, they have shown an uncanny ability to frustrate its ambitions—a dynamic that is often overlooked by Western strategists.

In Syria, for example—often seen as the centerpiece of Moscow’s Middle East comeback—Russia’s ability to dictate developments has been repeatedly stymied. The original goals of the Russian military intervention, keeping President Bashar al-Assad’s regime in power and restoring its control over the Syrian heartland, were largely achieved more than four years ago.  Since then, the Kremlin has repeatedly bumped up against its own limitations when trying to help reconquer all the territory that remains outside of the regime’s hands, as well as winning sanctions relief and reconstruction aid for Damascus—let alone curtailing the involvement in northern Syria by powerful outside states such as Turkey and the United States. Moreover, it frequently has to contend with the Assad regime’s willingness to pit its two main patrons, Moscow and Tehran, against each other.

Russia’s intervention in Libya also has fallen short of its aims. Beginning in late 2019, Moscow deployed mercenaries from the so-called Wagner Group to fight on behalf of the warlord Khalifa Haftar, a one-time CIA asset who is based in the eastern half of the country. But Moscow was always doubtful of the Libyan commander’s military competence and his loyalty to Russia. And by mid-2020, after Turkish military forces arrived to shore up Haftar's rival, the UN-recognized Libyan government, Russia abandoned its assault on the capital of Tripoli and pivoted to the diplomatic track.

Russian efforts to increase its influence elsewhere in the region have fared even worse. Neither Algeria nor Egypt, which both buy vast quantities of Russian arms, has been willing to create enduring strategic partnerships with Moscow or grant it reliable, long-term access to air bases or naval facilities. Russia’s commercial penetration in the region is also fairly limited. Unlike the Soviet Union, today’s Russian state is not in the business of financing massive development and infrastructure projects. Russian companies now have simpler aims—making money—but what they bring to the table is not always competitive with their Chinese, U.S., or European firms.

This limited influence reflects the fact that Russia’s policy tools are ill suited to address the daunting problems facing the region. These include the COVID-19 pandemic’s fallout, as well as more deep-seated afflictions such as authoritarian rule, corruption, and the unmet demands of increasingly youthful populations for economic opportunity. And although the United States also lacks easy answers for these generational challenges, at least it has the virtue of approaching the region through a more holistic, rights-centered framework, especially under the administration of President Joe Biden. In Libya, for example, citizens still note with appreciation Washington’s postrevolutionary efforts to nurture civil society, education, a free media, and local governance, which stands in sharp contrast to Russia’s profit-centered focus on arms, infrastructure, and energy—to say nothing of credible UN allegations of war crimes committed by its Wagner Group mercenaries.

No one should harbor any illusions about the Kremlin’s capacity for malfeasance in this troubled region. But U.S. interests in the Middle East are best advanced by a sober, clear-eyed appraisal of the specific challenges posed by Russian activity—not breathless alarmism. In particular, Washington should recognize that in many instances, Moscow will fall short because of its limited capabilities and the ability of local actors to confound its plans.

With these limitations in mind, Washington should avoid viewing the region through a cold war lens. Not every development in the Middle East is a gain or loss in an open-ended proxy battle between the United States and Russia. For example, U.S. policymakers should desist from competing with Moscow to offer ever-greater arms sales to countries in the region. Authoritarian Arab states have mastered the art of using Russian overtures to seek more favorable terms from Washington. The United States shouldn’t fall for this gambit.

Still, U.S. policymakers should not be shy about challenging Russian activities in the Middle East with some targeted pushback—be it through diplomatic, economic, or military means or through more clandestine forms of pressure. For example, after Moscow started printing counterfeit Libyan banknotes to help Haftar’s government finance itself, U.S. officials presumably tipped off partners in Malta, who seized a shipment carrying more than $1 billion in fake Libyan bills. Another U.S. intelligence tip led to the arrest of two Russian operatives in the Libyan capital. And sometimes the United States has been able to shine a public spotlight on Russian wrongdoing—such as when U.S. Africa Command released imagery intelligence documenting Russia’s military buildup in Libya, providing evidence that it was violating a UN arms embargo. Such measures are unlikely to affect Russia’s overall determination to make trouble, but they may frustrate or slow the more malignant forms of Russian statecraft.

There is no question that Washington’s position in the broader Middle East was dented by the fiasco in Afghanistan. Ultimately, however, U.S. assets in the region are still unrivaled: the United States’ political and economic influence, hard power, soft power, embrace of multilateral diplomacy, and leadership of a rules-based global order continue to give it the upper hand over all its rivals. U.S. policymakers should focus on bolstering those advantages rather than inflating the threat posed by Moscow.