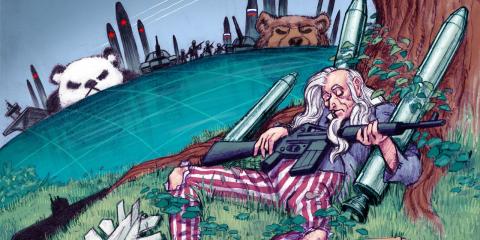 The risk of a US-China confrontation is greater than it has been in decades, and a broader war, sparked by Chinese action against Taiwan, is possible. In “Made for War: Can America and China Escape Thucydide’s Trap?” (2017) Graham Allison compared the situation to the Peloponnesian War, which the Athenian historian considered inevitable because Sparta feared the rising power of Athens.

But the real reason for the current tensions lies less in the decline and rise of the great powers than in the perceptions of threat, balance of power, autonomous assessments and internal decisions that have been driving China – and Russia – for several years. (They have increasingly allied themselves in their opposition to the US and the post-Cold War international order.) The growing threat of high-intensity state-against-state war is fueled by the growing belief among elites in Beijing and Moscow that theirs Power will be relatively disadvantaged in the US and its allies worsen unless they move soon, making victory increasingly unattainable.

There are three main reasons China and Russia want to face the US and its allies sooner rather than later, possibly within five years. First, the US military will need time to restructure and retool itself, away from counter-terrorism and towards a high-intensity great power conflict between states. The Army Modernization Strategy published in 2019 sets 2035 as the deadline for converting the Army into a multi-domain armed force. From a Russian or Chinese perspective, this means that every additional year will shift the imbalances that they currently favor in some areas in favor of the US.

The second factor is domestic conditions in the US and Europe. Western democracies are hit by the Covid-19 Trifecta; increasingly brazen mass immigration to which their governments appear unable to respond effectively; and the nascent Cultural Revolution, particularly in the US, which is likely to peak in the next two years. All of them have weighed on national cohesion across the West, fueled distrust of the government, and sowed doubts that the old democratic institutions and processes are capable of fulfilling the basic requirements of governance and keeping citizens happy. Once America is out of its current 1970s-style internal turmoil, the re-consolidated US, with its major manufacturing supply chains pulled back from China, will face Beijing and Moscow with a far more dangerous enemy than it does today.

A good indicator is recent reports that the US has made a qualitative leap in hypersonic missile technology that would likely undo the lead Russia and China were hoping to maintain by investing in their own programs. Notwithstanding their stormy propaganda, Beijing and Moscow are well aware that America’s research and development base can be mobilized to improve US capabilities. Time is on the US side when it comes to the quality and sophistication of its weapon systems.

The third factor: building up internal pressure within the Chinese and Russian companies. The population development and current forecasts paint a devastating picture for both countries. In 2021, China reported its first projected population decline since the famine that accompanied Mao Zedong’s “Great Leap Forward” in the late 1950s. With the official birth rate of 1.3 children per woman – well below the replacement rate of 2.1 and in part a consequence of the now relaxed one-child policy – there are credible predictions that China’s population will peak in 2022 and the Births will continue to decline and deaths will exceed births by six million in 2025. The population of Russia is projected to decrease from 146 million today to 121 million in 2050.

Historically, wars were often started because of misjudgments resulting from uncertain intelligence estimates and underestimation of the enemy. In the case of the US’s strategic competition with China and Russia, the risk of war has risen not because of their rise, but because of an assessment of how China and Russia will base the real short-term effects of Washington’s decision on their defense strategy on the fundamentals – power competition and conflict rather than counter-terrorism and Nation building. Whether war breaks out will depend on how much Beijing and Moscow fear the global shift in power over the next decade and how eager they will be to use their perceived current relative advantages to reshape the world.