Russia and China are trying to change the world order 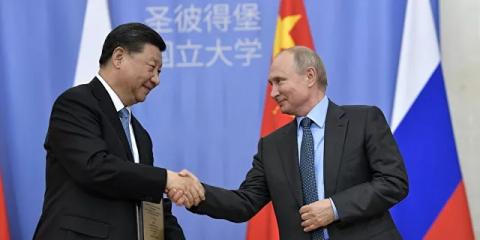 The western alliance has threatened the Kremlin with “massive” and “unprecedented” sanctions if Russia attacks Ukraine. But, as the Ukraine crisis reaches boiling point, western efforts to isolate and punish Russia are likely to be undermined by the support of China — Russia’s giant neighbour.

When Vladimir Putin travels to Beijing for the beginning of the Winter Olympics on February 4, the Russian president will meet the leader who has become his most important ally — Xi Jinping of China. In a phone call between Putin and Xi in December, the Chinese leader supported Russia’s demand that Ukraine must never join Nato. A decade ago, such a relationship seemed unlikely: China and Russia were as much rivals as partners. But after a period when both countries have sparred persistently with the US, Xi’s support for Putin reflects a growing identity between the interests and world views of Moscow and Beijing.

According to the Chinese media, Xi told Putin that “certain international forces are arbitrarily interfering in the internal affairs of China and Russia, under the guise of democracy and human rights”. As Xi’s remarks to Putin made clear, the Russian and Chinese leaders are united by a belief that the US is plotting to undermine and overthrow their governments. In the heyday of communism, Russia and China supported revolutionary forces around the world. But today Moscow and Beijing have embraced the rhetoric of counter-revolution.

When unrest broke out in Kazakhstan recently, Putin accused the US of attempting to sponsor a “colour revolution” — a term given to protest movements that seek to change the government — in a country that borders both Russia and China. Senior Chinese ministers echoed those remarks. Washington’s hidden hand As Russia and China see it, the uprising in Kazakhstan fitted a pattern. The Kremlin has long argued that the US was the hidden hand behind Ukraine’s Maidan uprising of 2013-14, in which a pro-Russian leader was overthrown. China also insists that foreign forces — for which, read the US — were behind the huge Hong Kong protests of 2019, which were eventually ended by a crackdown ordered from Beijing.

Both Putin and Xi have also made it clear they believe that America’s ultimate goal is to overthrow the Russian and Chinese governments and that local pro-democracy forces are America’s Trojan horse. In 1917, President Woodrow Wilson of the US talked of “making the world safe for democracy”. In 2022, Putin and Xi are determined to make the world safe for autocracy. The ambitions of Russia and China, however, are far from being wholly defensive. Both Putin and Xi believe that their vulnerability to “colour revolutions” stems from fundamental flaws in the current world order — the combination of institutions, ideas and power structures that determines how global politics plays out.

As a result, they share a determination to create a new world order that will better accommodate the interests of Russia and China — as defined by their current leaders. Two features of the current world order that the Russians and the Chinese frequently object to are “unipolarity” and “universality”. Put more simply, they believe that the current arrangements give America too much power — and they are determined to change that. “Unipolarity” means that, after the collapse of the Soviet Union, the world was left with only one superpower — the US.

Fyodor Lukyanov, a Russian foreign-policy thinker who is close to President Putin, believes that unipolarity “gave the United States the ability and possibility to do whatever it saw fit on the world stage”. He argues that the new age of American hegemony was ushered in by the Gulf war of 1991 — in which the US assembled a global coalition to drive Saddam Hussein’s Iraq out of Kuwait. The Gulf war was followed by a succession of US-led military interventions around the world — including in Bosnia and Kosovo in the 1990s. Nato’s bombing of Belgrade, Serbia’s capital, in 1999, has long formed part of Russia’s argument that Nato is not a purely defensive alliance. The fact that Nato bombs also struck the Chinese embassy in Belgrade has not been forgotten in Beijing.

After the 9/11 terror attacks on New York and Washington, Nato invoked Article 5 — its mutual-defence clause — and invaded Afghanistan. Once again, according to Lukyanov, America had demonstrated its willingness and ability to “forcefully transform the world”. But America’s defeat in Afghanistan, symbolised by the chaotic withdrawal from Kabul in the summer of 2021, has given the Russians hope that the US-led world order is crumbling. Lukyanov argues that the fall of Kabul to the Taliban was “no less historical and symbolic than the fall of the Berlin Wall”. Influential Chinese academics are thinking along similar lines.

Yan Xuetong, dean of the school of international relations at Tsinghua University in Beijing (Xi’s alma mater), writes that “China believes that its rise to great-power status entitles it to a new role in world affairs — one that cannot be reconciled with unquestioned US dominance.” Like Lukyanov, Yan believes that “the US-led world order is fading away . . . In its place will come a multipolar order”. President Xi himself has put it even more succinctly with his often repeated claim that “the east is rising and the west is declining”. For Russia and China, the making of a new world order is not simply a matter of raw power. It is also a battle of ideas.

While the western liberal tradition promotes the idea of universal human rights, Russian and Chinese thinkers make the argument that different cultural traditions and “civilisations” should be allowed to develop in different ways. Vladislav Surkov, once an influential adviser to Putin, has decried Russia’s “repeated fruitless efforts to become a part of western civilisation”. Instead, according to Surkov, Russia should embrace the idea that it has “absorbed both east and west” and has a “hybrid mentality”. In a similar vein, pro-government thinkers in Beijing argue that a fusion of Confucianism and communism means that China will always be a country that stresses collective rather than individual rights. They claim that China’s success in containing Covid-19 reflects the superiority of the Chinese emphasis on collective action and group rights.

Beijing and Moscow argue that the current world order is characterised by an American attempt to impose western ideas about democracy and human rights on other countries, if necessary through military intervention. The new world order that Russia and China are demanding would instead be based on distinct spheres of influence. The US would accept Russian and Chinese domination of their neighbourhoods and would abandon its support for democracy or the colour revolutions that might threaten the Putin or Xi regimes. The crisis over Ukraine is a struggle over the future world order because it turns on precisely these issues.

For Putin, Ukraine is culturally and politically part of Russia’s sphere of influence. Russia’s security needs should give it the right to veto any Ukrainian desire to join Nato, the western alliance. Moscow also demands to act as the protector of Russian speakers. For the US, these demands violate some basic principles of the current world order — in particular, the right of an independent country to define its own foreign policy and strategic choices. The Ukraine crisis is also about “world order” because it has clear global implications. The US knows that if Russia attacks Ukraine and establishes its own “sphere of influence”, a precedent will be set for China.

During the Xi era, China has built military bases all over contested areas of the South China Sea. Beijing’s threats to invade Taiwan — a self-governing democratic island that China regards as a rebel province — have also become more overt and frequent. If Putin succeeds in invading Ukraine, the temptation for Xi to attack Taiwan will rise, as will the domestic pressure on the Chinese leader from excitable nationalists, sensing the end of the American era. Russia and China clearly have similar complaints about the current world order. There are also some important differences between the approaches of Moscow and Beijing.

Russia is currently more willing to take military risks than China. But its ultimate goals may be more limited. For the Russians, the use of military force in Syria, Ukraine and elsewhere is a way of repudiating the claim made by former US president Barack Obama that Russia is now no more than a regional power. Dmitri Trenin of the Carnegie Center in Moscow argues that, “For the country’s leaders, Russia is nothing if it is not a great power.” But while Russia aspires to be one of the world’s great powers, China seems to be contemplating displacing the US as the world’s pre-eminent power.

Elizabeth Economy, author of a new book called The World According to China, argues that Beijing is aiming for a “radically transformed international order” in which the US is in essence pushed out of the Pacific and becomes merely an Atlantic power. Since the Indo-Pacific is now the core of the global economy, that would essentially leave China as “number one”. Rush Doshi, a China scholar working in the White House, makes a similar argument in his book, The Long Game. Citing various Chinese sources, Doshi makes the case that China is now clearly aiming for American-style global hegemony.

A bid for global supremacy The difference in the scale of the ambitions of China and Russia reflects the difference in their economic potential. Russia’s economy is now roughly the size of Italy’s. Moscow simply does not have the wealth to sustain a bid for global supremacy. By contrast, China is now, by some measures, the world’s largest economy. It is also the world’s largest manufacturer and exporter. Its population of 1.4bn people is roughly ten times that of Russia.

As a result, it is realistic for China to aspire to be the most powerful country in the world. But while the differences in the economic potential of Russia and China makes Xi ultimately more ambitious than Putin, in the short term it also makes him more cautious. There is something of a gambler’s desperation in Putin’s willingness to use military force to try to change the balance of power in Europe. Trenin argues that, having seen Nato expand into much of what was once the Soviet bloc, Putin sees Ukraine as his “last stand”.

In Beijing, by contrast, there is a strong feeling that time and history are on China’s side. The Chinese also have many economic instruments for expanding their influence that are simply not available to the Russians. A signature project of the Xi years is the Belt and Road Initiative, a vast international programme of Chinese-funded infrastructure that stretches into Central Asia, Africa, Europe and the Americas.