Roughly one out of every four Europeans harbors anti-Semitic views 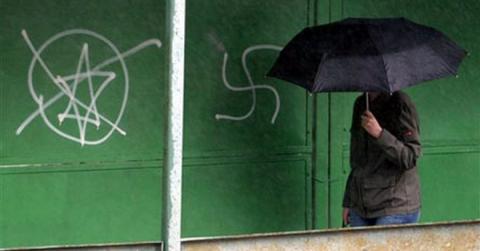 Anti-Semitic attitudes are most prevalent in Poland, South Africa, Ukraine and Hungary, according to a survey published Thursday by the Anti-Defamation League. The country with views least hostile to Jews was Sweden, the survey of select countries found.

The ranking was based on responses to a series of questions concerning beliefs in anti-Semitic stereotypes. Eighteen countries outside the United States were included in this latest global survey by the U.S.-based anti-Semitism watchdog. The inaugural ADL anti-Semitism survey, which included 100 countries, was conducted in 2014. The latest version did not include Middle Eastern or North African countries.

Those who responded “probably true” to a majority of the 11 questions were considered to harbor anti-Semitic attitudes.

In Poland, 48 percent of the respondents were found to fall into this category. Restitution of Holocaust-era Jewish property and a law making it a criminal offense to accuse the Polish state or people of complicity in Nazi war crimes have sparked much controversy in recent years.

In South Africa, where the boycott, divestment and sanctions movement has established a stronghold and which recently downgraded diplomatic relations with Israel, 47 percent did. In Ukraine, 46 percent were found to hold anti-Semitic views, while in Hungary it was 42 percent. The nationalist government led by Prime Minister Viktor Orbán has frequently ran anti-immigrant billboard campaigns featuring Jewish financier George Soros, most recently in February.

The countries surveyed were Argentina, Brazil, Canada, Austria, Belgium, Denmark, France, Germany, Italy, the Netherlands, Spain, Sweden, United Kingdom, Hungary, Poland, Russia, Ukraine and South Africa. These particular countries were chosen either because they have sizable Jewish populations or because they raised red flags in previous surveys because of high levels of anti-Semitism.

“These findings serve as a powerful wake-up call that much work remains to be done to educate broad swaths of the populations in many of these countries to reject bigotry, in addition to addressing the pressing security needs where violent incidents are rising,” said ADL CEO Jonathan Greenblatt when announcing the findings.

More than 9,000 adults participated in the survey, which was mainly conducted by telephone interviews between April and June.

Based on the surveys, anti-Semitic attitudes have strengthened in Poland, South Africa, Ukraine, Russia, Brazil and Argentina since 2015. By contrast, they have weakened in Canada, Austria and Italy. No real change was registered in Belgium, Germany, Denmark, France, Hungary, the Netherlands, Spain, Sweden and the United Kingdom.

The following are some of the other key findings of the survey:

• Roughly one out of every four Europeans harbors anti-Semitic views (i.e., they agreed with the majority of statements presented in the survey about Jewish stereotypes).

• Stereotypes about Jewish control of the world markets are among the most prevalent anti-Semitic beliefs, being especially widespread in Eastern Europe. Asked whether they agreed with the statement that “Jews have too much power in the business world,” 72 percent of Ukrainians, 71 percent of Hungarians, and 50 percent of Poles and Russians responded affirmatively.

• “Jewish disloyalty” is a widespread stereotype in Western Europe. In Austria, Belgium, Denmark, Germany, Italy, the Netherlands and Spain, more than 40 percent of respondents said they believed Jews are more loyal to Israel than to their own country. This belief was also prevalent in Brazil (70 percent) and South Africa (60 percent).

• In many of the European countries surveyed, including Germany, large segments of the population said they believed that “Jews still talk too much about what happened to them in the Holocaust.” This sentiment was especially prevalent in Poland, where 74 percent of respondents said they agreed with this statement.

• Acceptance of anti-Semitic stereotypes was substantially higher among the Muslim populations of European countries — almost three times as high, on average. At the same time, anti-Semitism among Muslim in Europe was lower than among those Muslims in the Middle East and North Africa who were polled in 2014. The ADL surmised that this might reflect the impact of Holocaust education and exposure to Jews in Europe.