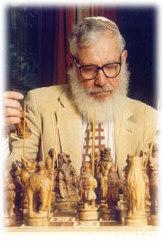 Robert Aumann was born in Frankfurt am Main, Germany, in 1930, to a well-to-do orthodox Jewish family. Fleeing Nazi persecution, he emigrated to the United States with his family in 1938, settling in New York. In the process, his parents lost everything, but nevertheless gave their two children an excellent Jewish and general education. Aumann attended Yeshiva elementary and high schools, got a bachelor's degree from the City College of New York in 1950, and a Ph.D. in mathematics from MIT in 1955.
He joined the mathematics department at the Hebrew University of Jerusalem in 1956, and has been there ever since. In 1990, he was among the founders of the Center for Rationality at the Hebrew University, an interdisciplinary research center, centered on Game Theory, with members from over a dozen different departments, including Business, Economics, Psychology, Computer Science, Law, Mathematics, Ecology, Philosophy, and others.

Aumann is the author of over ninety scientific papers and six books, and has held visiting positions at Princeton, Yale, Berkeley, Louvain, Stanford, Stony Brook, and NYU. He is a member of the American Academy of Arts and Sciences, the National Academy of Sciences (USA), the British Academy, and the Israel Academy of Sciences; holds honorary doctorates from the Universities of Chicago, Bonn, Louvain, City University of New York, and Bar Ilan University; and has received numerous prizes, including the Nobel Memorial Prize in Economic Sciences for 2005.

Aumann is married and had five children (the oldest was killed in Lebanon in 1982). Also, he has twenty-one grandchildren, and nine great-grandchildren. When not working, he likes to hike, ski, cook, and study the Talmud.