The risk of nuclear war 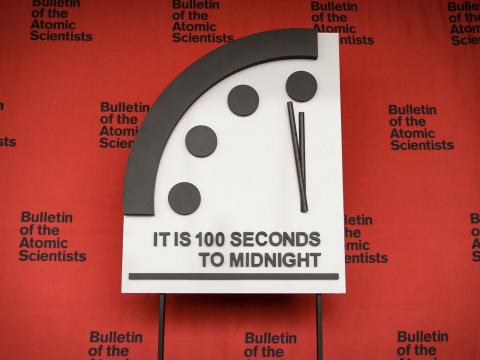 One day last week, I woke up in the morning and looked out the window to see the Sun was shining. My neighbourhood in the New York City area was calm and normal. "OK good," I said to myself, "we made it through the night without a nuclear war."

I work for the Global Catastrophic Risk Institute, a US-based think tank, where it's my job to think about humanity's gravest future threats. It's rare, however, that I have gone to sleep wondering whether the very next day will bring an exchange of nuclear weapons.

In the first few days of Russia's invasion of Ukraine, the conflict was escalating so fast that it could have conceivably gone all the way to nuclear war. My country, the United States, supports Ukraine, making it a potential target of a Russian nuclear attack. Fortunately, that hasn't happened.

Whether the invasion of Ukraine or any other event will result in nuclear war raises desperately important questions. For the individual: should I take shelter somewhere relatively safe? For human society: should global food production systems prepare for nuclear winter? In the worst-case scenario, a nuclear war may cause the collapse of global civilisation, potentially resulting in massive harm into the distant future. However, whether an event will result in nuclear war is deeply uncertain, as are the consequences. Reconciling this tension between the importance of evaluating nuclear war risk and the difficulty of doing so is a primary focus of my research. So, how do we approach these uncertainties, and what can it tell us about how to interpret present-day events?

Risk is generally quantified as the probability of some adverse event occurring, multiplied by the severity of the event if it occurs. Common risks can be quantified using past event data. For example, to quantify the risk of you dying in a car crash, one can use abundant data on past car crashes and segment them according to various criteria such as where you live and how old you are. You personally have never died in a car crash, but many other people have, and those data make for reliable risk quantification. Without this and similar data, the insurance industry couldn't operate their business.

The risk of you dying in a nuclear war cannot be calculated in the same way. There has only been one previous nuclear war – World War Two ­– and one data point is not enough. Furthermore, the atomic bombings of Hiroshima and Nagasaki occurred 77 years ago, under circumstances that no longer apply. When WW2 began, nuclear weapons had not yet been invented, and when the bombings in Japan occurred, the US was the only country with nuclear weapons. There was no nuclear deterrence, no threat of mutual assured destruction. There was also no taboo against the use of nuclear weapons, nor were there any international treaties governing their use.

If WW2 was all we had to go on for evaluating nuclear war risk, our understanding would be very limited. However, while there may be only one piece of data to rely on, there is also a lot of relevant information – sources of insight that can help us understand the risk.

One example is events that went partway to nuclear war, such as the Cuban missile crisis. The ongoing Russian invasion of Ukraine will hopefully turn out to be another – the only way that it won't is if it turns into an actual nuclear war. I am aware of 74 "partway" events: 59 compiled in a study my group did on the probability of nuclear war and, in a separate study, an additional 15 events in which asteroid impacts produced explosions that may have been mistaken for a nuclear attack. There are almost certainly more such events, including some for which there is no public record.

Broadly speaking, there are two types of scenarios: intentional and inadvertent

Another important source of information is a conceptual mapping of the various scenarios in which nuclear war could occur. Broadly speaking, there are two types of scenarios: intentional nuclear war, in which one side decides to launch a first-strike nuclear attack, such as WW2. And inadvertent nuclear war, in which one side mistakenly believes it is under nuclear attack and launches nuclear weapons. Examples include the 1983 Able Archer incident, when the USSR initially misinterpreted Nato military exercises, and the 1995 Norwegian rocket incident, when a scientific launch was briefly mistaken for a missile.

Finally, there is information about specific events that may provide a guide. For example, in the ongoing Russian invasion of Ukraine, an important parameter is Vladimir Putin's mental state. Nuclear war is more likely if he is angry, temperamental, humiliated, or even suicidal. Other factors include whether Ukraine succeeds in fighting off the Russian military, whether Nato gets more involved in direct military operations, and whether any major false alarms occur. These sorts of details – to the extent that we are able to learn about them – are valuable for informing our understanding of the probability of this particular event resulting in nuclear war.

All of the above pertains to the probability of nuclear war. To evaluate risk, we also need the severity. This has two parts. First are the details of the war itself. How many nuclear weapons are detonated? With what explosive yield? At which locations and altitudes? What other, non-nuclear attacks also occurred during the conduct of the war? These details determine the initial harm. The second part is what happens next. Are survivors able to maintain basic needs – food, clothing, shelter? How severe are secondary effects such as nuclear winter? Given all the various stressors, are survivors able to maintain any semblance of modern civilisation, or does civilisation collapse? If collapse does happen, do survivors or their descendants ever rebuild it? These factors determine the total, long-term harm caused by the nuclear war.

Any nuclear war, however "small", would be catastrophic for the affected areas. However, what makes nuclear weapons so worrisome is not the damage that can be caused by a single explosion. That can be large in its own right, but it's still comparable to the damage that can be caused by conventional, non-nuclear explosives. WW2 is illustrative: of the roughly 75 million people who died in this conflict, only around 200,000 were killed by nuclear weapons. Comparable amounts of destruction were caused by the carpet bombing of cities such as Berlin, Hamburg, and Dresden. Nuclear weapons are terrible, but so are conventional weapons used in sufficient quantity.

What makes nuclear weapons so worrisome is that they make it so easy to cause so much devastation. With a single launch order, a country can cause many times more harm than occurred in all of WW2, and they can do it without sending a single soldier overseas, by instead delivering nuclear warheads with intercontinental ballistic missiles. Mass destruction has long been possible, but it has never been so easy.

Mass destruction has long been possible, but it has never been so easy

This is why the taboo against the use of nuclear weapons is so important. The taboo serves to help countries resist any temptation they may have to use nuclear weapons. If it's OK to use one nuclear weapon, then maybe it's also OK to use two, or three, or four, and so on until there has been massive global destruction.

In risk terms, the distinction between a "small" and a "large" nuclear war is important. Any given person – you, for example – is a lot more likely to die in a nuclear war in which 1,000 nuclear weapons are used compared to one in which only one nuclear weapon is used. Furthermore, civilisation as a whole can readily withstand a war with a single nuclear weapon or a small number of nuclear weapons, just as it did in WW2. At a larger number, civilisation's ability to withstand the effects would be tested. If global civilisation fails, then the impacts enter a fundamentally more serious category of severity, a situation in which the big-picture, long-term viability of humanity is at stake. Suffice to say, the number of nuclear weapons needed to push the impacts into this category is another point of deep uncertainty.

Given all this uncertainty, it is fair to consider what the risk analysis is good for. In this context, my group's research on nuclear war risk gets two common criticisms. Some people say that it is too quantitative. Other people say that it is not quantitative enough. The "too quantitative" people argue that nuclear war is a risk that inherently cannot be quantified, or at least cannot be quantified with any adequate degree of rigor, and therefore it is wrong to even try. The "not quantitative enough" people argue that risk estimates are essential for sound decision-making and that some estimate, however flawed and uncertain, is better than none.

In my view, both perspectives have some merit, and have informed my approach to nuclear war risk analysis. There are important decisions that hinge on the risk of nuclear war, such as on how nuclear-armed countries should manage their weapons and proceed on disarmament. This gives us strong reason to attempt to quantify the risk. However, in so attempting, it is important to be humble and not claim to know more about the risk than we actually do. Spurious quantification of the risk creates its own risk – the risk of bad decision-making. Given the exceptionally high stakes, it is important that we get this one right.

What then for the current situation, the Russian invasion of Ukraine? What is the risk of that resulting in nuclear war? I can't quote you a precise number due to the myriad uncertainties and the rapidly changing state of affairs. What I can say is that it is a prospect worth taking extremely seriously.