Reuven Rivlin: "‘Anti-Semitism and racism are 2 sides of same coin" 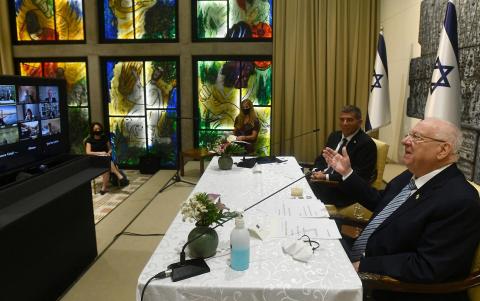 President Reuven Rivlin held a video conference Wednesday with US Jewish leaders, telling them that Israel and the Diaspora need to stand together against anti-Semitism and “all forms of racism.”

Rivlin’s comments appear to be the first from a senior Israeli official expressing solidarity with the protests. The vast majority of US Jewish groups have already pledged their support and vowed to fight against “systemic racism” in the US.

The president also expressed fears anti-Semitism could get worse over the coming year in light of the pandemic, which has led to a spike in anti-Semitic conspiracy theories. “These are days when we are all facing the challenges of the coronavirus and, more than ever, it is most important to deepen the bonds between us. It is time for us to be there for each other,” he said.

Rivlin said since becoming president in 2014, he has a better understanding of American Jewry “with all of its different streams.”

Rivlin called for continued efforts to “build new bridges of understanding” between Israel and American Jews, while thanking the US Jewish community for its support of Israel.

Speaking at the President’s Residence alongside Rivlin, Ashkenazi hailed Diaspora Jews as a “cornerstone” of Israeli diplomacy. “The sense of mutual obligation between the State of Israel and the global Jewish community is a cornerstone of Israeli diplomacy around the world and for me personally as foreign minister,” he said.

Ashkenazi added: “I salute the leaders of the American Jewish community for their leadership as they confront the coronavirus pandemic. We share the same fate and we must work together to get through this crisis.” Diaspora Affairs Minister Omer Yankelevich addressed the video conference in a pre-recorded message. Her spokesperson said she could not attend alongside Rivlin and Ashkenazi due to time constraints.

Citing the “unimaginable challenges” experienced by many Jewish communities due to the coronavirus, Yankelevich said the pandemic was an opportunity to bring Jews across the globe closer together. “There is not a Jewish community anywhere that has not been touched by recent events and this has acted as a unifying factor,” she said. “This unifying power that we have used as Jews in times of crisis should not evaporate and we need to focus together on things we can build and create.”

Ashkenazi and Yankelevich, both of the Blue and White party, took up their posts last month with the swearing-in of the new government. Yankelevich is the first female ultra-Orthodox minister in Israel’s history.