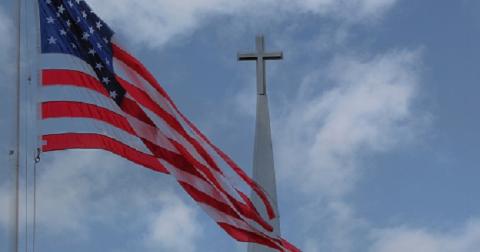 Half of American Evangelicals say that “my religion is the one true faith leading to eternal life in heaven,” and that members of other religions – even if they believe in God like Jews – are not included. This is according to the results of a new Pew Research Center survey of nearly 6,500 US adults. The survey was taken between September 20 and 26 on the Center’s American Trends Panel.

Although its focus was meant to be on how people of faith view the suffering in the world caused by the COVID crisis, the survey also asked questions about people’s views of the afterlife – heaven and hell. The survey found that almost three-fourths of Americans (73%) believe in heaven, but they disagree about who can go there.

Nearly a third (31%) of all American Christians say their religion is the one true faith leading to eternal life in heaven, compared with 58% who say that there are multiple religions that can lead to such eternal reward.

Nineteen percent of Evangelicals say that members of other Christian denominations can achieve eternal life in heaven, and 44% say that many religions can get you there. Catholics are much more likely (71%) to believe this.

About a third (32%) of Americans also say that people who do not believe in God cannot enter heaven, compared with 39% who say that they can. Evangelical Protestants especially feel that belief in God is a prerequisite for heaven, with 71% saying that only those who have it can go.

There are also divisions between Republicans and Democrats, with 44% of Republicans saying that they believe in heaven, and that people who do not believe in God cannot go there, compared with less than half as many Democrats (21%) who hold the same view.

Exclusivity generally increases as people age, with 21% of 18- to 29-year-olds, 29% of 30- to 49-year-olds, and 41% of 50- to 64-year-olds saying that only people who believe in God can go to heaven. Older than that, however, people become more inclusive: just 35% of American adults over the age of 65 think that such belief is the ticket to heaven. And 62% of US adults say they believe in hell.

Those who expressed belief in both heaven and hell were further surveyed and asked to describe the nature of these places. More than two-thirds (69%) say that heaven is free of suffering, almost two-thirds (65%) say individuals are reunited with their loved ones who previously died, 60% say that you can meet God there, and 60% say that individuals in heaven have “perfectly healthy bodies.”

In contrast, more than half of respondents think that hell is a place of psychological suffering (53%), where people become aware of the suffering they created in the world (53%), and where individuals experience physical suffering (51%).

The survey was conducted among Americans of all religions, but it did not obtain enough respondents from Jews, Muslims, Buddhists, Hindus or Mormons to report separately on their views, Pew said. The margin of error was +/-1.9 percentage points.

Regarding the survey’s attempt to answer philosophical questions about why there is so much suffering in the world, such as the death of more than five million people from corona in the last two years, the majority of Americans do not blame God but say that bad things happen as a result of random chance, people’s own actions, and the way society is structured, though some believe that Satan is the cause of evil in the world.

Among the 91% who believe in God or another higher power, Pew asked additional questions about the relationship between God and human suffering. Eighty percent of respondents say suffering comes from people and not God, though more than half (56%) believe that God chooses “not to stop the suffering in the world because it is part of a larger plan.”

Moreover, nearly half (48%) of people who believe in God or a higher power say that “Satan is responsible for most of the suffering in the world” reflects their views either “very well” or “somewhat well.” This view is especially strong among Evangelicals.