Red meat and cheese back on menu 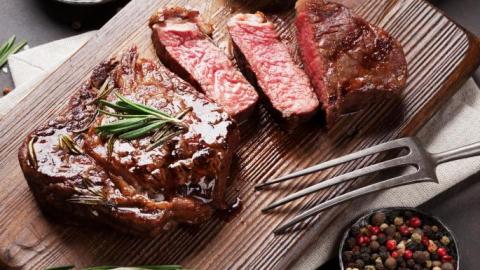 Eating red meat and cheese every day can help to cut the risk of early death by a quarter, according to a global study that challenges conventional health advice. The healthiest diet included three daily servings of dairy products and one and a half of meat, according to the findings, which suggest that the real danger comes from sugar and white bread.

Most healthy eating guidelines have urged people to cut down on fat, particularly saturated fat from animal products. However, after studying data on more than 218,000 people in 50 countries, Canadian researchers have added to recent evidence that refined carbohydrates are the bigger worry.

They said that eating a varied diet of unprocessed food with everything in moderation was likely to be a better way to protect health than obsessing about individual nutrients. Their previous data, from 138,500 people around the world, had suggested that low-fat diets were unhealthy, and researchers used those results to come up with a healthy diet score, which they then tested on three further sets of data involving almost 80,000 people.

The fifth of people with the healthiest diet were 25 per cent less likely to die during eight years of follow-up and 22 per cent less likely to have a heart attack than the fifth with the least healthy diet, after accounting for wealth, education and other health habits. On average the healthy diet included more than eight portions of fruit and vegetables a day, two and a half portions of nuts and beans, a serving and a half of meat and three portions of dairy, equivalent to a glass of milk, 60g (2oz) of cheese and a small pot of yoghurt.

“Our findings on full-fat dairy and unprocessed red meat do challenge conventional thinking,” said Andrew Mente of McMaster University, Ontario, who presented the findings at the European Society of Cardiology congress in Munich. He added: “The current recommendations are based mainly on work that was done two or three decades ago.”

People with the healthiest diet got about half their calories from carbohydrates, while those with the least healthy diet got two thirds. “That’s not fruit and vegetables, it’s starchy refined grains and added sugar,” Dr Mente said.

The healthy eaters had about twice as much dairy produce and meat than is recommended by UK guidelines, which recently reduced limits for dairy. Jeremy Pearson, associate medical director at the British Heart Foundation, said: “Meat and dairy can contribute to a healthy, balanced diet as long as they’re eaten in moderation along with plenty of fruits and vegetables, pulses, wholegrains and nuts.”

Louis Levy, of Public Health England, said: “While we agree that dairy plays a role in a healthy diet, too much can lead to high levels of saturated fat and salt increasing our risk of heart disease.”

A separate study by Maciej Banach of the Medical University of Lodz on 24,000 people found that those who ate cheese regularly were 8 per cent less likely to die over six years.