Reading between the lines: How Amos Oz views Jewish identity 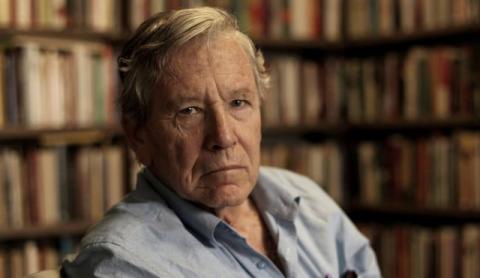 In their jointly written investigation into the defining essence of the Jewish people, the father-and-daughter team of Amos Oz and Fania Oz-Salzberger come up with definition so reductive that one may end up no wiser regarding who’s a member of the club.

A lively, often charming combination of history, mythical narrative, illuminating literary analyses, and jokes, this book of “conversational essays” between father and daughter gives us a particular overview of how two self-described Jewish atheists' approach and interpret what it means to call oneself a Jew. Although “Jews and Words” is described as a dialogue, sometimes “argumentative,” between Amos Oz, the internationally renowned Israeli novelist and his daughter Fania Oz-Salzberger, an accomplished professor of history and philosophy at the University of Haifa, I never discerned any distinct difference in their views, only one between the authors and Orthodox Jews in Israel, whom the Ozes imply want to read both of them out of the Jewish community by reducing Judaism to religion only.

That Jews and words are inextricably intertwined is well known. Jews talk a lot and they are disputatious. From the time of Abraham they not only argued among themselves, but as the Torah, Talmud and oral tradition suggest, they had scholarly debates even with the Almighty. I don’t know who did the counting, but the authors note tellingly that verbs signifying “speak,” “say” or “talk” appear more than 6,000 times in the Hebrew Bible, whereas the verbs “make” or “do” show up fewer than 2,000 times.

“Ours is not a bloodline,” father and daughter write, and while both in passing demonstrate respect for faith, they insist that the “line” is not religious either. It is, instead, a “text line” beginning with the Torah and running through the Mishnah, Talmud and “innumerable other books” (rarely named) that were the Torah’s progeny. Though the Ozes describe ancient Jewish literature, with its “sophisticated sense of parable and symbol,” as “breathtaking” and “splendid,” they declare much in that literature irrelevant or downright harmful to life in the modern world. They therefore reserve the right to pick and choose from it – to sweep those things they judge regressive and worse into the dustbin of history, while saving what they see as supportive of the quest for freedom, social justice and individual importance, even self-importance, although individualism, they say, should always be strongly connected to community and communal obligation. They like John Donne’s line that no man is an island unto himself, but go further, saying Jews are better represented as a peninsula, a distinct particularity attached to a larger reality.

Amos Oz told National Public Radio host Scott Simon during a recent interview about “Jews and Words” that he and his daughter Fania regard Judaism not as a religion only or even primarily, but as a civilization, as a heritage much more than a faith-based belief system. “The heritage,” Oz said, “contains first and foremost books [and] texts, and religion is only one of the components.” For thousands of years we Jews, he said, had nothing but books, and these were always discussed, surely more often than God, around the family table.

Throughout “Jews and Words,” it is argued, often lyrically and always with great erudition and scriptural literacy, that Jewish people form a unique continuum based on words. “We are not about stones, clans, or chromosomes,” the Ozes say. We don’t know about God, they tell us, but Jewish continuity was always paved with words and texts. Sometimes it seems that the authors mean texts that are at least indirectly linked to ancient Jewish literature; but often they talk about all and any “Jewish” texts, including secular speeches, plays, poems and even verbal jokes (unfortunately often stale ones). Though they never say so explicitly, surely they must mean that both “sacred” and secular texts are on the Jewish continuum. S.Y. Agnon and Woody Allen, for example, are alluded to, by virtue of their devotion to words, as are Mel Brooks and Michael Chabon. Moreover, Oz, in his interview on NPR, agreed with his host’s reflection that “there is a direct line between Moses and Alan Dershowitz.”

But then what does it mean when father and daughter say that many Jewish writers of traditional upbringing, including Freud, Kafka, Saul Bellow and Bernard Malamud, upon confronting the temptations of modern existence, tried unsuccessfully to live in two worlds at once, but instead suffered an “irreplaceable amputation” and fell off the Jewish continuum? Do they mean to say that Mel Brooks and Michael Chabon are part of the all-important “text line” that illuminates so much of Jewish history, but that Kafka and Malamud, et al, all masters of text who struggled with the question of Jewish identity, are not? This is never made fully clear.

Nor were things made any less ambiguous during the interview on NPR. Fania Oz-Salzberger told her host and the radio audience that the Jewish continuum is based on what she calls a “Jewish intertextuality” generated from the early religious books, and that she and her father and other “atheists of the book” feel entitled to be “lovingly selective” from within that intertextuality. But to be selective, lovingly or otherwise, presupposes scriptural literacy. Odds are, however, that typical non-observant Jews (outside the world of scholars and the literati) rarely read or think about the Bible or the Talmud or anything else in the “text line” of which the Ozes are so fond. Yet, as Fania put it, the Ozes “strongly believe that our children and their children after them, in their own universe, be it Facebook or Twitter,” will continue talking about books. Let’s hope so.

I, like Amos Oz and Fania Oz-Salzberger, while not an antitheist a la Richard Dawkins, am no believer in an anthropomorphic, transcendental, interventionist God who inspired the writing of sacred texts, parts of which cannot be ignored for fear of some form of divine retribution. But I have been director of a university Jewish studies program, president of my Reconstructionist synagogue, and an adult student in classes on Hebrew scripture. And so I, too, like the Ozes, want to reclaim the legacy of Jewish culture, and refuse to have my form of Judaism dismissed by Orthodox Jews. Again, like the authors of “Jews and Words,” I am a political liberal, a believer in community, the social contract (covenant, if you will), and elementary fairness and justice. And I, like them, think I came by these values in part by saturation in Jewish tradition.

Moral and ethical values and obligations of Jews, including the liberal values held by the Ozes, do not necessarily wither when detached from the Jewish religious roots that nurtured them, but the authors of “Jews and Words” do not really tell us whether these values retain a unique, or at the very least distinct, Jewish flavor without some substantial knowledge, not just of any books, even those defined as “Jewish,” but of Jewish religious texts and history. They certainly don’t make things any clearer when they write, “Try to replace the word Jew in this book with reader. In many places you’d be surprised how well it works.”

Things get even murkier when they say that to trace and substantiate the Jewish continuum, “you don’t have to be an observant Jew. You don’t even have to be a Jew. Or for that matter, an anti-Semite. All you have to be is a reader.” Now, by the logic of Maimonides, who learned much from Aristotle, could it not be said that if to be a Jew all you have to be is a reader, that an anti-Semitic reader (especially one who reads to trace the Jewish continuum) is a Jew, or at least could be? Well, perhaps. Because late in their book the authors say that a Jew is anyone who wrestles with the question, “Who is a Jew?” Jean Paul Sartre, not in any way a Jew, involved himself in that age-old chestnut in the 1940s, and many anti-Semites have as well.

But sprinkled throughout the book are hints that not any reader is (or can be) a Jew. Even if most societies have “cherished the imperative of intergenerational storytelling,” there is, the Ozes claim, a unique Jewish dimension to the universal passing of the torch from old to young with words and texts. They affirmatively quote Mordecai Kaplan, who wrote, “No ancient civilization can offer a parallel comparable in intensity with Judaism’s insistence upon teaching the young and inculcating in them the traditions and customs of their people.” Is such a generalization fair to other cultures? The Ozes admit they don’t know. But they do know that Jewish boys “were put in touch with the written word at a staggeringly young age.”

More important in regard to Jewish uniqueness, the authors claim in this book that some things are “untranslatable.” The “granite splendor of Hebrew and the coarse spice of Yiddish can never become universal flavors.” Maybe not. But where does that leave those millions of Jews who neither read nor write Hebrew or Yiddish, or even those many thousands who will have read “Jews and Words” in the original English. Struggling still, I suspect, with questions about their Jewish identity.

By Gerald Sorin
Gerald Sorin, a professor of American and Jewish studies at the State University of New York, New Paltz, is author of the newly published “Howard Fast: Life and Literature in the Left Lane” (Indiana University Press), winner of the National Jewish Book Award.