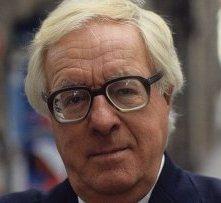 Fantasy writer Neil Gaiman remembers his friend Ray Bradbury who has died at the age of 91.

Yesterday afternoon I was in a studio recording an audiobook version of a short story I had written for Ray Bradbury's 90th birthday. It's a monologue called The Man Who Forgot Ray Bradbury, and was a way of talking about the impact that Ray Bradbury had on me as a boy, and as an adult, and, as far as I could, about what he had done to the world. And I wrote it last year as a love letter and as a thank you and as a birthday present for an author who made me dream, taught me about words and what they could accomplish, and who never let me down as a reader or as a person as I grew up.
Last week, at dinner, a friend told me that when he was a boy of 11 or 12 he met Ray Bradbury. When Bradbury found out that he wanted to be a writer, he invited him to his office and spent half a day telling him the important stuff: if you want to be a writer, you have to write. Every day. Whether you feel like it or not. That you can't write one book and stop. That it's work, but the best kind of work. My friend grew up to be a writer, the kind who writes and supports himself through writing.

Ray Bradbury was the kind of person who would give half a day to a kid who wanted to be a writer when he grew up.

I encountered Ray Bradbury's stories as a boy. The first one I read was Homecoming, about a human child in a world of Addams Family-style monsters, who wanted to fit in. It was the first time anyone had ever written a story that spoke to me personally. There was a copy of The Silver Locusts (the UK title of The Martian Chronicles) knocking about my house. I read it, loved it, and bought all the Bradbury books I could from the travelling bookshop that set up once a term in my school. I learned about Poe from Bradbury. There was poetry in the short stories, and it didn't matter that I was missing so much as a boy: what I took from the stories was enough.

Some authors I read and loved as a boy disappointed me as I aged. Bradbury never did. His horror stories remained as chilling, his dark fantasies as darkly fantastic, his science fiction (he never cared about the science, only about the people, which was why the stories worked so well) as much of an exploration of the sense of wonder, as they had when I was a child.

He was a good writer, and he wrote well in many disciplines. He was one of the first science fiction writers to escape the "pulp" magazines and to be published in the "slicks". He wrote scripts for Hollywood films. Good films were made from his novels and stories. Long before I was a writer, Bradbury was one of the writers that other writers aspired to become. And none of them ever did.

A Ray Bradbury story meant something on its own – it told you nothing about what the story would be about, but it told you about atmosphere, about language, about some sort of magic escaping into the world. Death is a Lonely Business, his detective novel, is as much a Bradbury story as Something Wicked This Way Comes or Fahrenheit 451 or any of the horror, or science fiction, or magical realism, or realism you'll find in the short story collections. He was a genre on his own, and on his own terms. A young man from Waukegan, Illinois, who went to Los Angeles, educated himself in libraries, and wrote until he got good, then transcended genre and became a genre of one; often emulated, absolutely inimitable.

I met him first when I was a young writer and he was in the UK for his 70th birthday celebrations, held at the Natural History Museum. We became friends in an odd, upside-down way, sitting beside each other at book-signings, at events. I would be there when Ray spoke in public over the years. Sometimes I'd introduce him to the audience. I was the master of ceremonies when Ray was given his grand master award, by the Science Fiction Writers of America: he told them about a child he had watched, teased by his friends for wanting to enter a toy shop because they said it was too young for him, and how much Ray had wanted to persuade the child to ignore his friends and play with the toys.

He was kind, and gentle, with that midwestern niceness that's a positive thing rather than an absence of character. He was enthusiastic, and it seemed that that enthusiasm would keep him going forever. He genuinely liked people. He left the world a better place, and left better places in it: the red sands and canals of Mars, the midwestern Halloweens and small towns and dark carnivals. And he kept writing.

"Looking back over a lifetime, you see that love was the answer to everything," Ray said once, in an interview.

He gave people so many reasons to love him. And we did.