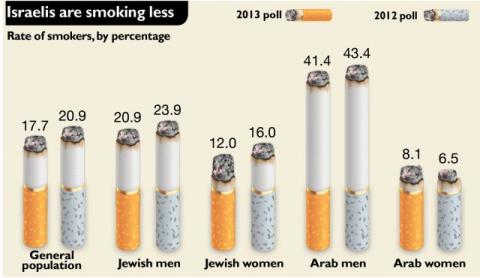 The number of smokers in Israel is continuing to decline, according to a Health Ministry study published ahead of World No Tobacco Day, which will be marked this coming Friday to highlight the health risks associated with tobacco use and advocate for effective policies to reduce tobacco consumption.

The report, which by law is submitted annually to the Knesset, shows that the proportion of smokers in Israel has declined 14 percent within one year. The report is based on surveys conducted by the Center for Disease Control at the Health Ministry, and its findings suggest the continued tax increases on cigarettes may be having an effect on the number of people who kick the habit.

At the same time, in 2011 tobacco companies’ expenditures on advertising, sponsorships and sales promotion amounted to NIS 54.5 million, an increase of 6 percent relative to 2010.

However, the Health Ministry clarified that the new findings may have been skewed as the recent survey examined Israelis exercise regimens and included questions about smoking. The ministry also said that respondents were informed of the content of the survey ahead of time, which may have influenced the number of participants with a greater awareness of the risks associated with smoking.

In recent years, the tax on cigarettes has increased, including last month as part of the economic measures and reforms introduced by the new government. In 2012, Israeli households spent an estimated NIS 7.1 billion on cigarettes and the state’s revenues from the taxes on those cigarettes amounted to NIS 5.3 billion, as compared to NIS 4.1 billion in 2009.

Alongside the tax hikes, there have been additional efforts to combat smoking in Israel. The Ministerial Committee for Legislation on Sunday approved another proposed law, which would significantly limit cigarette advertising and stipulate that cigarette packets in Israel picture sick people, as is done in a number of Western countries.

In the past decade the number Israelis who smoked 10 to 20 cigarettes a day has remained steady, while heavy smokers – those who consume more than a pack a day – saw a greater decline, in all the population groups except for Arab women.

The survey found that Tel Aviv is the leading city in Israel in terms of enforcing the public smoking ban: It issued 2,909 fines to smokers and business owners who violated the law, among them 1,431 fines to smokers in restaurants and cafes.

Tobacco kills nearly six million people each year, of which more than 600,000 are non-smokers who die from breathing second-hand smoke.