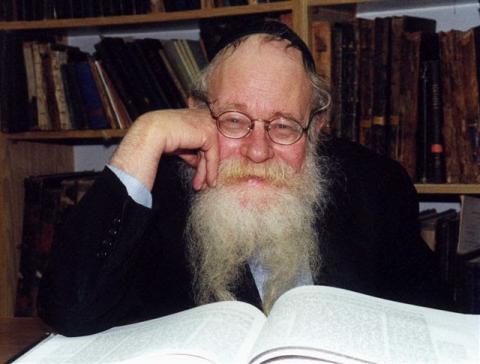 Rabbi Adin Steinsaltz, a prolific Jewish scholar who spent 45 years compiling a monumental and ground-breaking translation of the Talmud, has died. He was 83. The Steinsaltz Center, the Jerusalem educational institute he founded, said he died Friday in Jerusalem after suffering from pneumonia.

Steinsaltz, an educator who established a network of schools in Israel and the former Soviet Union, wrote more than 60 books on subjects ranging from zoology to theology. But the Talmud, the central text in mainstream Judaism, was his greatest passion.

The masterwork he is best-known for is his massive translation of and commentary on the entire Babylonian Talmud, which he worked on for 45 years – completing the 44-volume Hebrew edition in 2010. This work was revolutionary because it made the Talmud accessible  to those who did not grow up in the traditional yeshiva world – at first in modern Hebrew and later in English, French, Spanish and Russian.

The Talmud details rabbinical discussions over the centuries pertaining to Jewish law, ethics, philosophy, customs and history. But because of its complexity, obscurity and the fact that much of it is written in the ancient Aramaic language, the rarified text for centuries remained beyond the scope of comprehension of all but a select group of scholarly Jews. The text, compiled in Mesopotamia in the 5th century, is broken into 63 sections and stretches over 2,700 double-sided pages.

“I do believe that this knowledge, it is not just knowledge of history, it is knowledge of ourselves, it is our own picture,” Steinsaltz told The Associated Press in a 2010 interview at the end of his work. “Talmud is a book that has no real parallel … it is a constant search for truth, for absolute truth.”

Over 4 1/2 decades, working for up to 16 hours a day, he labored over the ancient texts, translating them from the Aramaic into modern Hebrew — along with editions in English, French and Russian. The 45-volume series added his own explanations of phrases, terms and concepts, as well as listing the rulings of Jewish law derived from the text.

Steinsaltz coined his quest to educate Jews “Let my people know,” a play on Moses’ passage from Exodus: “Let my people go.” There have been other, partial translations into English and other languages, but none are as comprehensive or have as extensive a commentary. In the AP interview, Steinsaltz explained that he took to the Talmud like a musician takes to an instrument and he compared comprehension of it to that of math and music. “It is a different language and you have to think in that language. It is a language of thought and not a language of words,” he said.

President Reuven Rivlin eulogized him on Twitter: “Our hearts mourn the passing of Rabbi Adin Even Israel Steinsaltz … He was a man of great spiritual courage, deep knowledge and profound thought who brought the Talmud to the people of Israel in clear and accessible Hebrew and English. May his memory be a blessing.”

Israeli Prime Minister Benjamin Netanyahu remembered Steinsaltz as “a Torah genius and a man of exemplary spirit.” “His important works will stand for generations at the foundation of Jewish heritage, as an eternal flame in his memory,” Netanyahu said.

Steinsaltz, who also used the Hebraized surname Even-Israel, was born in what is now Israel in 1937 to secular parents but became observant in his teens, when he entered seminary schools and learned Aramaic.

After studying physics and chemistry at Hebrew University, he became a math teacher and at the age of 24, according to his website, the youngest school principal in Israel’s history. Three years later, in 1965, he began working on what he called his “hobby” – the translation of the Talmud. He wrote numerous commentaries on religious texts as well as “My Rebbe,” a biography and memoir of his close relationship with the revered spiritual leader of the Chabad movement — the late Lubavitcher Rabbi Menachem M. Schneerson.

His effort earned him the 1988 Israel Prize – the nation’s highest civilian honor, the President’s Medal and a number of honorary doctorates. He is survived by his wife, Sara, three children and numerous grandchildren and great grandchildren, according to the center. He was scheduled to be buried Friday on Jerusalem’s Mount of Olives.